NSW votes round up. It’s just one sleep until NSW goes to the polls and the campaign is getting a bit weird. The NSW Liberals uploaded a community post to BuzzFeed yesterday titled “the ultimate Labor fail guide”. It got taken down (maybe because it wasn’t funny) and was re-uploaded here. They don’t really seem to understand their audience.

But the Libs aren’t the only ones who are awkwardly reaching out to the youth — both the Greens and Labor have been trying to win votes with memes. This one was particularly confusing: 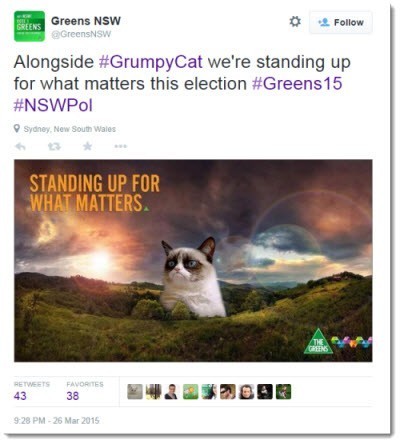 Grumpy Cat, known to her owners as Tardar Sauce, doesn’t stand up for things — she says no to things. Perhaps “CSG — Grumpy Cat says no” would have been more appropriate.

In the world of weird election correspondence, Greens candidate Osman Faruqi tweeted yesterday that the conservative Shop, Distributive & Allied Employees’ Association (SDA) had told its members they should preference Fred Nile’s Christian Democrats second after the ALP because of the Christian Democrats’ record on trading hours on weekends. Nothing to do with their conservative views on marriage, we’re sure. 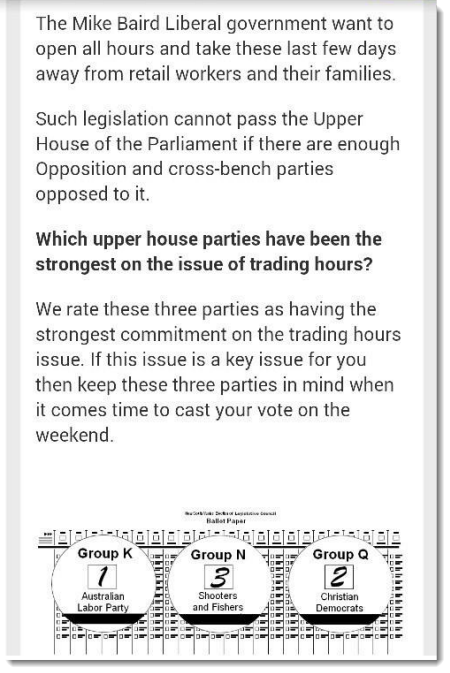 Pollies get jabbed. Federal parliament doesn’t sit again until May, but when the pollies arrive back in town they won’t be just facing the budget. Ms Tips hears that budget week also brings the Parliament House flu vaccinations for MPs and their staff. The jabs are free for public servants and political staffers, but not for our elected reps, who have to fork out $17.50 to protect themselves against the flu. We hope the jellybeans are still free.

Latham turns libertarian? The Australian Libertarian Society’s third-annual Friedman conference takes place in Sydney on May 2-3, and none other than former Labor leader Mark Latham is one of the guest speakers. Does this mean he’s finally gone hard Right? We asked conference organiser, economist and Australian Taxpayers Alliance deputy director John Humphreys what the deal was. He said getting Latham along was a “quirk of circumstance”. “I’ve long enjoyed his contributions (even when I disagree with them), and it sometimes seems that his politics are edging more libertarian over time,” Humphreys told Crikey. “So I went along to a talk he gave in Brisbane last year, had a chat with him, and invited him to take part. When I followed up earlier this year he was keen to give a talk on ‘the withering of the state’.”

It’s the first time a former major party leader has spoken at the conference, but not the first time a Labor-aligned person has — Keating minister Gary Johns spoke at both the 2013 and 2014 conferences. Mind you, Johns, who held the seat of Petrie until 1996, joined the right-wing Institute of Public Affairs in 1997, so Ms Tips presumes his involvement raised fewer eyebrows. Humphreys also informed Ms Tips that Crikey’s very own World is not Enough blogger Charles Richardson spoke at the 2013 conference — his talk is fondly remembered.

Controversy Carmody. Crikey readers might remember quite a kerfuffle from mid-last year when Campbell Newman appointed Tim Carmody, a district court judge and chief magistrate, as Chief Justice of Queensland’s Supreme Court. The leap-frogging appointment was quickly panned by legal sources, but Carmody’s direct colleagues understandably kept quiet. Until yesterday, when retiring Supreme Court Justice Alan Wilson used his valedictory speech to launch a scathing broadside against his Chief Justice. Wilson’s comments, which have been widely reported, said Carmody hadn’t attended an actual hearing since February 15, and accused Carmody of “hypocrisy” for urging judges to be civil while referring to them at other occasions as “snakes” and “scum”. The controversial appointment, Wilson continued, had led to a “serious loss of morale” on the bench. It’s a shocking public critique of the kind you rarely see in the Australian legal system — those with an interest can read Wilson’s full valedictory speech here.

Catalyst quits sugar. The ABC’s science program Catalyst is no stranger to controversy, but it seems like next week’s episode is just inviting it. The episode, titled “Our Chemical Lives”, will investigate whether the chemicals we ingest in everyday life affect our health and personality. The show will measure the chemicals in host Dr Maryanne Demasi’s body with those in the body of Sarah Wilson. Described by the program as “clean living convert and media personality”, Wilson’s book I Quit Sugar has been widely criticised for not having much scientific basis. The episode sounds interesting — we recommend watching while eating some MSG-laden take-away food.

It’s just not cricket. It was a difficult afternoon for many of us yesterday who were chained to our desks while the Cricket World Cup semi final got underway, but cricket.com.au provided workers with less sympathetic bosses with a way to keep up to date. This link looks like a standard spreadsheet (how productive and work-related), but actually updated the cricket scores regularly. We hope the spreadsheet is available again on Sunday, for anyone who is stuck at work during the final. 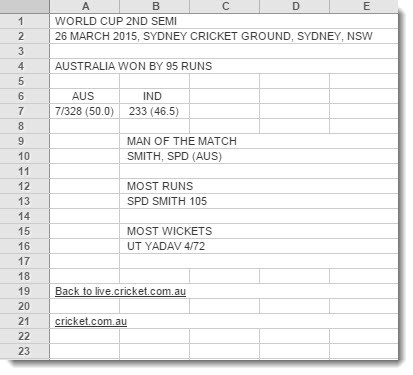 And against al the in-house revelations re Carmody the Curry or Maul continues to push the “validation” of the Limited News Party government lap-dog appointment.