After a day of reproachful messages suggesting that Helen Razer was so mentally unwell that she needed a detox, she held forth to cleanse the toxins. This is her enema. 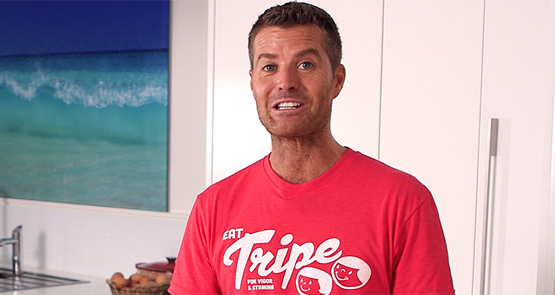 I wrote a piece yesterday about the idiocy of Paleo and folk-scientism generally.

To answer the assertions appended to it on social media, masked as questions like “how is Paleo harming anyone?”, I could just suggest you read the article. As it seems unlikely few people are likely to do this before holding forth with an opinion, the article is, in part, about the danger that inheres in the freedom people feel to hold forth with an opinion without actually reading anything.

Most particularly, Australian chef Pete Evans who would not trouble me one jot had he not — and I don’t know how you could have missed this major news story if you have an interest in Paleo — attempted to publish a book recommending the “nourishment” of infants with liver and other foods roundly critiqued by those with a an actual qualification in dietary science. Dieticians (who are different to nutritionists in that they have actually gone to the bother of going to school and learning boring scientific facts — how elitist! What sell-outs! Stop sucking the prong of agribusiness and listen to Paleo Pete, who is magically free from any desire for profit!) have said that the recommendations in this book could potentially cause death or illness.

People are “free” to be idiots, of course. But they are not free to their idiocy if it impacts other people — in this case, babies. And they are not free to say that this is a gentle and marvellous diet if it does, in fact, create greater demand for meat that is an unsustainable product. Even if the meat is grass-fed, it still requires the clearing of land, the expulsion of methane and the dwindling of native habitat. And, of course, there is the small matter of death to stock and a diminished food security blah blah blah.

Just as long-term Atkins advocates were found to have a greater risk of colorectal cancer and other fat-related illnesses, the scholarship is showing that advocates of this fad, however much you characterise it as a harmless love of “wellness” — whatever that means — are at similar risks.

But, more than anything, it is the ostrich grotesquery of “faith” in “folk wisdom” that is dangerous to us. Frankly, if we lose a few Paleo idiots to the Darwin Awards, the world will probably be a more mildly tolerable place. (But I think babies should be fed things that won’t kill them and administered with injections that will stop them, or other babies, from dying. I’m old-fashioned like that.) So, I don’t give a crap if you cram your face with activated cacao brownies and your bread-free mind with the worst kind of pseudo-science idiots more powerful than you can produce.

But, I do give a crap that the tendency to think that we understand “science” has become a primary fuel for idiots’ everyday conversation. I actually hate this pseudo-scepticism about “Big Sugar” and the “Immunisation Complex” so fucking much, that I have been driven to actually do work and rarely post on the We Are All Experts self-interested forum that is Facebath.

You are not, in all likelihood, a dietary scientist. So quit banging on about “good fats”. You are not, in all likelihood, an archaeological anthropologist. So quit banging on about “what our ancestors ate”. You are not an immunologist, so give your children shots, and you are not, for the sake of screaming shitfuck, an environmental scientist, so quit pretending that your self-involved diet which — let’s be frank — is not about anything other than your desire to look nicer in a pair of skinny jeans is “good for the planet”.

And, no. I don’t claim to know the answers, either. But I know, as any person of fair mind would, that the “answers” on which you have decided are founded in reeking self-interest, ideological delusion and pseudo-science. Not “truth”; however gentle and lovely that truth might appear.

Paleo and the entire bullshit wellness industry are not some simple marvellous panacea for all the world’s problems and your half-baked, or raw, solutions have economic consequences. So man up and admit that this is about you, you, you, and your desire to find a simple solution for what you imagine to be your problems and not, by any means, a cure for the world’s ills.

People are starving. Rather like they were in the actual Palaeolithic age. People are so hungry, that they must eat GMO crops, which are the only fucking things that can withstand the violation that your privileged Paleo lifestyle depends upon. Still, you know, be sure to campaign against GMO. If there were not a literal billion people going hungry in the world and more working in the service of our privilege, you would not be in any position to arse around with pseudo-science and say, “I think we need to get back to nature” and “Monsanto is evil!”. You would not have the luxury of mindlessly discussing a return to a prehistory that is entirely fabricated by people like Pete Evans.

I am not saying that starving people are the direct consequence of your privilege. You had no say in it, of course. There is no need to moralise and blame the lavish self-regard of our era because that self-regard is itself a by-product of the market. You know. The same global market that keeps people in labour camps making the things that we in the West can consume.

The real conspiracy is that the system forms itself. It is not about individual morality and it is not about 12 powerful men in a room deciding on the future of the Earth. I have no doubt that there are rooms filled with powerful men covertly attempting to set a course for the planet, but these plans will never be reified exactly as described, because it is a vast system of screw-ups and poverty and wealth that just happened. And is permitted to continue because we often believe in stupid ideas. Like, for example, we have the “individual choice” not to vaccinate our children even though this will directly harm others, or the “individual choice” to just keep eating our artisanal beef even though this indirectly relies on a very real and painful inequality.

So, don’t Quit Sugar. Maybe Quit Bullshit instead. And if you continue to Quit Sugar, please at least be honest with yourself and say it’s because you want to look nice in skinny jeans and don’t give me a faux-moralising lecture about how sugar is “addictive”. The science is undecided on that one, by the way. Sugar may not be addictive. But being a fucking idiot certainly is a high that a bunch of you cannot seem to do without.

Fuck off, then. I am off to do some fucking work. Which is not a state I recommend but is somehow preferable to the endurance of your faith, which you tell yourself is independent opinion, in marketed bullshit.

Paleo is a stupid cult, and it is killing people

Bloody idiots. Look what you did! Now you got Helen really, really angry! Ain’t nobody got time for that.

I agree with most of what she says, btw. The Hidden Persuaders are simply winning. And why not? They have actually studied us (scientifically), so until we do the same to their practices, there will be enough people falling for their marketing strategies.

Amen Helen. The idea of ‘paleo” diet is seriously f&^k-witted. Do these people also subscribe to paleo brain surgery, paleo dentistry? It’s another stupid freaking fad – it will pass as all such things do – to be replaced by the next dumb-arsed fad which will load up on one type of food whilst demonising another. Can’t wait to see what they come up with next.

I would totally buy a Quit Bullshit t-shirt. Wait, is that bad?

What an aggressive woman you are! The only thing I agree with you is that infants should be fed breast milk or infant food, and yes children should be immunised ( although I am actually married to that one in million person who was poorly affected by immunisation) silly me, I should have been more careful who I fell in love with. You really can’t stand being told your wrong or maybe even the milder “I disagree with you” and in this way fall into exactly the same category of the people you are criticising. I am an adult and I will make my own decisions, whatever you think of me or I of you.