Media briefs: hold the outrage … hail Fellowes … they like Mike …

Everyone joins Team Baird. And other media tidbits of the day.

They like Mike. The Sydney media are united in their support for Liberal Premier Mike Baird at tomorrow’s NSW election. But both major dailies pulling for him did not help former Victorian premier Denis Napthine — so will it be enough for Baird?

The Daily Telegraph is unsurprisingly on the Baird bandwagon, praising his leadership for NSW’s increase in economic growth, low unemployment figures and surge in housing construction:

“Premier Mike Baird, has run a bold and positive re-election campaign with a remarkable initiative at its core — to place 49 per cent of the state’s electricity infrastructure in a long-term lease. The massive capital injection from this plan would run into the tens of billions of dollars, allowing NSW to reinvigorate itself across all areas of public spending, from health and education to transport and sporting venues.”

He is also praised for running a campaign “rooted in family and faith” and having a strong relationship with his father, former deputy Liberal leader of NSW Bruce Baird. In contrast, Luke Foley is accused of running a “fear campaign” that “would have voters believe a partially privatised electricity system would lead to untold chaos for consumers, workers and the state’s budget”.

The Sydney Morning Herald is singing a similar tune, outright stating that it is “backing Mike Baird”:

“To his credit, Mr Baird has taken his highly unpopular policy to the people. In the face of a dishonest scare campaign by Labor and unions alleging power prices will rise under the deal, the Premier has made a strong case for leasing the 49 per cent of assets to unlock billions in funds for major projects.”

While the Fairfax tabloid acknowledges he still has work to do on other areas such as “transport, coal seam gas and, most all, the planned partial lease of the state’s electricity poles and wires”, the SMH urges “voters support Mr Baird and his Coalition team to build on their progress”. — Crikey intern Brihony Tulloch

New tallyroom on the block. The Sydney Morning Herald is angling in on the TV networks, airing live election coverage hosted by former ABC 7.30 NSW host Quentin Dempster, who joined the publication last month to boost its video content. Dempster promises “it’ll be fun, with satire and irreverence”. — Myriam Robin

Farewelling Fraser. On page 40 of today’s Age, a full-page ad from the Vietnamese community in Australia thanking former prime minister Malcolm Fraser, who allowed many refugees to enter Australia from Vietnam during the Vietnam war. 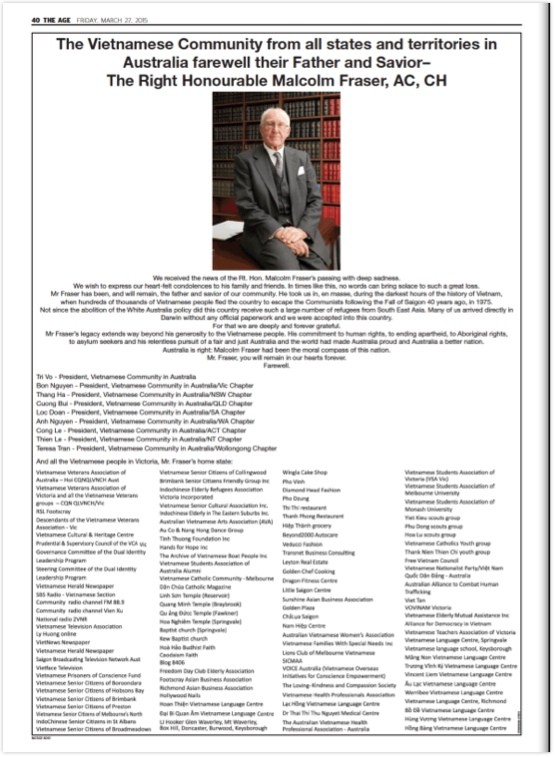 There are Vietnamese picketers outside his funeral in Melbourne today as well, holding vigil. — Myriam Robin

No display ads, no outrage? There’s an interesting article up on Slate that predicts the rise of new business models in digital news (BuzzFeed and Vox rely on content marketing, Gawker on e-commerce) will make outrage far less profitable. Clicks are getting cheaper, so audience matters more, argues David Auerbach:

“There will still be a niche for ‘content-first’ viral models, but the focus of the advertising world is shifting toward advertising providers, which means the merchants of outrage will struggle to keep their foothold. So in the new, more integrated online advertising age, here is my prediction: more ambiguously coulored dresses, less outrage.”

Six seasons and a movie for Downton? As suggested a month or so ago, Downton Abbey is to end after the current season, six, goes to air in the UK and US later this year and in early 2016. A joint announcement by UK commercial TV network ITV and producers Carnival Films (which is owned by NBCUniversal, the big US TV network) announced the final season, which is about to start production, would wrap up the storylines of all the characters. Writer Julian Fellowes will again pen every episode. The reason for the decision is the NBC period drama called the Gilded Age (how very Edith Wharton/Henry James) which Fellowes will write. In Australia the Seven Network will have to decide whether to hang onto series six until the start of 2016 ratings, as it has done with the first five series, or start airing series six soon after it airs in the UK later this year because the storylines and finale will become public very quickly.

For Seven the loss of Downton Abbey won’t be as dramatic as the impact on ITV (average rating 11 million viewers) and PBS in the US (Downton Abbey has revitalised PBS’s Masterpiece series — with 26 million people having watched series five earlier this year, with a further 12.6 million streamed views of individual episodes, as it became the highest rating program on PBS). There is now talk of Downton Abbey the movie. — Glenn Dyer

Front page of the day. A big news day in Sydney, with the cricket and a state election. Note the no-doubt-expensive ad from Mike Baird down the bottom: the ban on election advertising from the Wednesday before a state or federal election only applies to radio and TV, so print, digital and mobile advertising is fine … 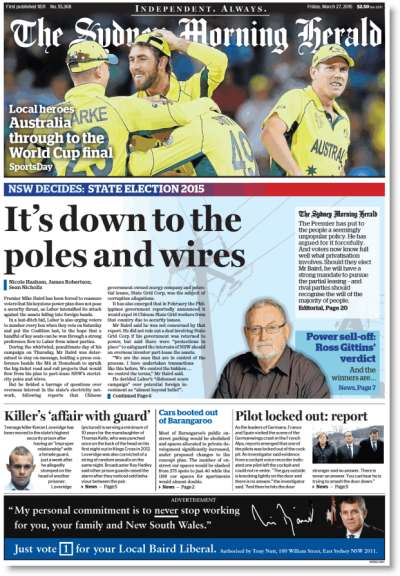 “Baird Liberal”? I presume this is product differentiation so we don’t confuse it with the Abbott Liberals in Canberra.