There is so much Labor could be campaigning on in NSW. And yet it has chosen to alienate Asian-Australian voters instead. 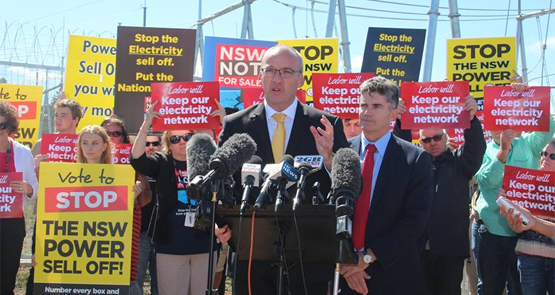 Whoever was responsible for running NSW Labor’s election campaign should be charged with bringing the party into disrepute and punished.

In the desperate last days of the campaign, Opposition Leader Luke Foley has played the race card with the same dumb insensitivity as then-leader of the federal opposition John Howard in 1988.

Foley has opposed the Coalition’s long leasing of 49% of the electricity distribution network — the so-called “poles and wires” — because he suspects the new owners might be an arm of the Communist Party of China.

He wants to stop the possible sale to Chinese Communist interests, suggesting they could use the network to cut off power to defence bases like Holsworthy (army) and Richmond (RAAF). He has called on the Australian Security Intelligence Organisation and Australian Secret Intelligence Service to investigate any overseas bids.

Team Foley has launched its pre-election “red China” scare at the same time Bill Shorten’s federal ALP is wooing Beijing’s rulers, and supporting Australia’s participation in the $100 billion Asian Infrastructure Investment Bank, all while former foreign minister and NSW premier Bob Carr is promoting Australian involvement in the “Asian century” in his new role as director of the Australian-China Relations Institute.

Foley is not only out of step with the leaders of his own party and every major industrial, commercial and academic institution in the country, he is also recycling the ugly views of internet nutters and rednecks.

The immediate electoral impact may be felt in tomorrow’s election in Strathfield, where a large number of Asian voters are being asked to support former Newcastle MP Jodi McKay, who has been parachuted into the western-Sydney seat by Foley.

Foley’s apologists are shrugging off his “red China” scaremongering as merely spirited campaigning, saying that it will have no lasting damage on his leadership. Perhaps so, but for years, Asian-Australian voters — and other ethnic groups — turned their backs on Howard, and he remains haunted by the political stigma of his anti-Chinese remarks. Why will Foley escape similar censure?

Support for the xenophobic strategy came from Senator Sam Dastyari, a former NSW Labor party general secretary, who used parliamentary privilege to raise alarmist questions about discussions — fully disclosed at the time — between Baird and potential overseas investors, including the Chinese.

It is as if Foley has decided to vacate the high ground and use the campaign’s closing days to chuck everything, including the toilet and sink, at Premier Mike Baird. But voters genuinely like Baird, and his popularity is the highest of any current politician in the country, so personally attacking him appears to be a dreadful miscalculation. What if it only raises support/sympathy for Baird and backfires on Foley?

While indulging in crude scare tactics, Foley has ignored the Coalition’s real weaknesses:

Baird is determined to finish with a flourish. He was up at 5am this morning to visit the Sydney Fish Market before travelling to Cherrybrook Station construction site where the North-West Rail Link is powering ahead.

One of the glaring features of the campaign is the amount of time Baird has spent in western Sydney, a traditional ALP area, and the intense campaigning Foley has conducted on the far-north coast, a traditional Nationals area, where he has promised Australia’s first koala national park to be planned by our first-ever koala summit.

Every mainstream commentator seems to believe that Labor is likely to make three gains in the Northern Rivers — Tweed, Lismore and Ballina — all currently in the hands of the Nationals, but it is only likely to win Ballina.

From my own observations, Baird’s Liberals are going to do much better in western Sydney than Foley’s ALP is going to do on the far north. But we should know soon enough.

Why is it racist to express concern about overlap between a regional power’s commercial and political interests? I’m no fan of Foley’s, but comparing this to Howard’s comments is a bit of a stretch.

More of your pro-Liberal rant, Alex?
I think you have misjudged the Chinese (or any other foreign) takeover of the poles and wires lease. NO essential service should be in the hands of foreigners, as we in SA and Vic have learned over the years.
There is enormous resistance among the general public to the purchase of residential properties, farms and land in our country. What makes you think the purchase of power infrastructure is any different.
And stop using the r+ce card. No Australian citizen is permitted to buy such holdings in China, and a lot of other countries, so why is it only us who are raci+t?

I feel like a constituent who is being constantly talked down to by both the two parties not much preffered. While I don’t want Labor to win NSW. I have put substancial support (4 full page colour paid announcements)behind Kathy Smith tilt. Because I need her to displace Liberal Chris Holstien in the seat of Gosford. He has had his chance to address matters relating to his old council. And done nothing at all about published reports the council misled the State Coroner during his inquiry into five deaths at Piles Creek Somersby. Edward James on the long paddock

You don’t have to be an Internet nutter to be sceptical of the ability of very wealthy Chinese businessmen to act without considering his relations with the government of his country, or sceptical when you hear the Minister for Trade and Investment, Andrew Robb, say the TTPA won’t be signed unless it is in Australia’s interest. Both are subject to considerations that will be hidden from public view.

Alex, either you are a total sycophant for the Chinese government or you are naïve imbecile – why would you think its racist to want to retain Australian ownership of our infrastructure rather than having it owned by an entity which is ultimately controlled by the Chinese government? You are entitled to your opinion of course, but don’t try cheap racist tricks to bolster your argument. While Baird may win based on his charm, the majority of NSW is against flogging the lot to anyone, including the Chinese government!