The Small Business Minister is in the shadow of his higher-profile (and better-looking) colleague, but he doesn't mind. Plus other whispers and innuendo ...

Billson no beauty. It can be hard to get attention as a junior minister, especially in this government, with frontbenchers taking up all the soft media time with their love of emojis and encrypted messaging apps. So spare a thought for Small Business Minister Bruce Billson, who only rated fourth in the 2015 StartUp Muster survey asking which politician was most supportive of startups. Billson recently made good on his election promise to introduce legislation that protects small businesses from unfair contracts imposed by larger companies, but it’s Malcolm Turnbull who got voted as the most supportive (to be fair, Turnbull polls well). Out of more than 600 Australian startup founders that completed the survey, 10% named the Communications Minister as most supportive of fast-growing tech companies. Billson doesn’t hold any hard feelings towards Turnbull, though — he said yesterday: “He’s a far more handsome man than I am, and I understand his profile and visibility is greater than mine.” He knows that appearances aren’t everything though. “But I’m all about getting the job done — making a real difference and being valued for my outcomes and not my profile. I hope through that in the next survey I’ll look a little different [in the rankings]… We’ve got quite a lot going on with the support of entrepreneurship more generally.”

Politics and art meet. Wesley Enoch’s Black Diggers premiered last night in Canberra, and according to our tipster it was the entertainment after the curtain came down that caused a stir:

“A post-play statement was read out by a cast member on behalf of the group and broadly in support of the right of indigenous communities to exist wherever they should so choose. Not sure if that is why Senator Michael Ronaldson’s speech at the post-play function sounded like he was having to speak at a wake or if that’s because he knew he was speaking to a non-Coalition audience. The lack of applause suggested the latter.”

Freudian slip? A tipster pointed out this typo in the transcript of an interview with former head of the Department of Premier and Cabinet John Menadue about Malcolm Fraser. N.b. to the stenographer: while we’re sure Parliament was disillusioned at the time, the governor-general called for it to be dissolved, which is just a bit different.

Clarkson a goer, Latham a shoe-in. So, the Beeb’s finally done it. Jeremy Clarkson, of Top Gear, fame, has been formally sacked for attacking a producer.

His departure from the widely syndicated and wildly popular motoring show will leave a controversy-shaped hole. So who should replace him? Top Gear is fantastically popular across the world, so maybe a nominee from the colonies is called for. So tipsters, who do you think should replace Clarkson on Top Gear? Mark Webber? The Crikey bunker favourite is Mark Latham. Think about it — he’s no stranger to controversy and has been known for his menacing physical presence. He’d be perfect. And furthermore, presumably the gig would keep him so busy and wealthy he’d no longer have to write columns for the Fin Review. Win-win!

Morrison down with the kids. The attempted humanising of Social Services Minister Scott Morrison is continuing this week, with mixed results. While Morrison is hoping that we will forget his hardline approach as immigration minister, we’re not sure that doing the “Wombat Wobble” is the way to do it. Morrison busted out the moves with some preschoolers at a Geelong childcare centre last week, and uploaded this video to his YouTube channel. ScoMo looks like he’s done the dance before — he does have two young daughters. 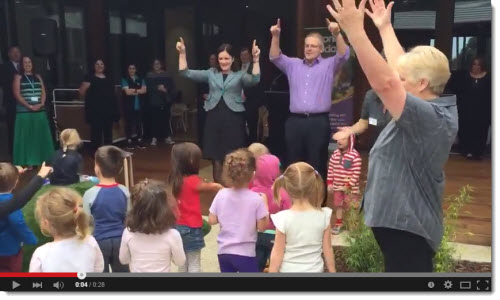 Also in the Scott Morrison files, he reacted to the news that Zayn Malik is leaving One Direction by suggesting that his colleague Ewen Jones step up to the mic: 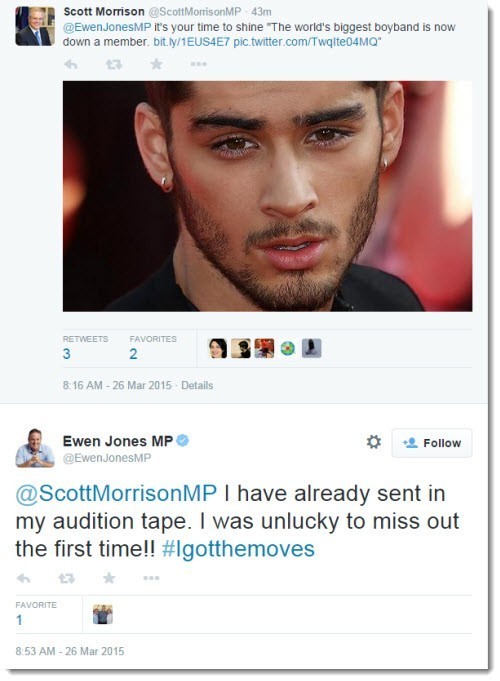 We would ask whether his sudden interest in British boy bands and Australian native fauna dances were to distract us all from the reports of horrific abuse of detainees in Australia’s offshore detention centres, but we have been reliably informed that’s an on-water matter.

Gillard slays. Former PM Julia Gillard continued in one of her many post-politics roles this week, lecturing undergraduate arts students at the University of Adelaide in the areas of politics, development and gender studies as part of her role as honorary professor. The verdict from one student who attended a lecture was that Gillard “slayed” (this a compliment), and we hear from a tipster that students were required to show their student IDs before being admitted to the lectures to ensure that they were actually students of the courses being taught.

On the topic of Gillard’s speeches, Penguin has announced that it is publishing “The Gillard Project” by Michael Cooney, who was her speechwriter for most of her prime ministership. The publishers are spruiking the book as “It was a comedy of manners, it was a comedy of errors, it was a tragedy, it was a bunch of stuff that happened; it was a calvary and a triumph.”

So you’re mocking the misuse of “disillusion” vs “dissolution”, and then in the very next heading we get “shoe-in”?

As for “Morrison’s post-modernism Prometheus make-over” – did it work for Frankenstein’s creation?

freudian slip ….? john menadue was never a former head of the department of “premier and cabinet” – i think you mean’t prime minister and cabinet. the ultimate typo on a typo?

“Out of more than 600 Australian startup founders that completed the survey, 10% named the Communications Minister as most supportive of fast-growing tech companies”

60 startup founders that don’t need internet for their startup