NSW Liberal Premier Mike Baird is seen by many as a down-to-earth everyman to the extent that, instead of Tony Abbott's image dragging Baird down, Baird's popularity is lifting Tony up. 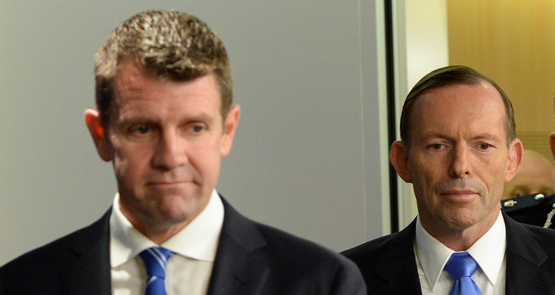 As Campbell Newman’s Liberal government sank to an unanticipated defeat at the Queensland election on January 31, Liberals in New South Wales were gripped by fear that their own government would be the next to be sucked into the vortex of Tony Abbott’s crushing unpopularity.

This, as much as anything else, provided the impetus for the extraordinary step taken by 39 of the party’s federal MPs in voting for a leadership spill a little over a week later.

But with evidence mounting that Mike Baird’s New South Wales government is, in fact, set to be comfortably returned on Saturday, it appears the Liberals’ feared scenario is playing out in reverse, with Baird’s popularity lifting the entire Liberal Party operation on its coat-tails, and, in doing so, granting Abbott a desperately needed reprieve.

When the campaign period began a month ago, polling suggested that the Coalition was in the box seat, but that Labor could still hope for a boil-over if certain stars aligned — if the campaign went its way, swings were concentrated in the right places, and the behaviour of Greens voters in allocating preferences changed as radically as it did in Queensland.

In aggressively pursuing Nationals-held seats on the state’s north coast with margins in excess of 20%, Labor has certainly been giving the appearance that it is playing to win.

But as the campaign has unfolded, Labor’s efforts to translate public opposition to electricity privatisation into electoral support look to have been sinking beneath other campaign dynamics, particularly with respect to the crucial role that evaluations of party leaders play in state elections.

A trend analysis of New South Wales polling suggests the start of the campaign period marked the peak of Labor’s fortunes. Polls at that time typically had the Coalition at a 54-46 lead based on preference flows from the 2011 election, which very likely flatter them by a percentage point or two. But a clear and steady trend in the Coalition’s favour since has resulted in a pick-up, perhaps by as much as another 2%.

Much of the credit belongs to the high visibility the campaign process has afforded to Mike Baird. This point was well made in The Guardian Australia on Monday by David Marr, who wrote that Baird came across as “hardly a politician at all: a banker from the beaches, a quiet Christian, a man without a faction, Mr Nice Guy in Macquarie Street”.

Regardless of the veracity of this perception — and Marr, for one, has his doubts — it’s an image that couldn’t be better tailored to counter the damage done to the collective image of the Liberal Party by the blundering swagger of the Prime Minister.

It may also be that the New South Wales campaign is feeding into Abbott’s improved standing more directly, at least so far as it is measured by the imprecise instrument of opinion polling.

State election campaigns have a way of introducing what can best be described as “static” into polling of federal voting intention, given the difficulty in evaluating the precise nature of the effect.

While the tone of a state campaign can certainly have an effect on a party’s broader image, and, in turn, exert a meaningful influence on the way federal politics is perceived, it is equally the case that questions on federal voting intention will simply confuse many who are weighing up how to vote in a state election at the time.

The state-level federal polling trends featured on my blog, The Poll Bludger, offer a potent illustration of this with respect to the Tasmanian state election of March last year, at which Labor suffered a drubbing to match those in New South Wales in 2011 and Queensland in 2012. At around this time, there was a two-party preferred bounce of around 4% in favour of the federal Coalition in Tasmania, and Tasmania alone.

This, of course, was a mere blip on the radar as far as the national picture was concerned, but it’s obviously a different story when something similar happens in the nation’s most populous state. And while the looming result in New South Wales will obviously be no match for the state anti-Labor landslides of recent years, it could nonetheless explain why the federal Coalition’s recovery over the past six weeks has been at least 1% greater in New South Wales than elsewhere, based on trend measures of two-party preferred polling at state level.

Like anything, the impact of this shouldn’t be overstated. Most of the recent recovery looks like a correction after the plunge that followed the Prince Philip knighthood on Australia Day, which was probably never going to endure given the third-order nature of the issue.

Even so, the New South Wales campaign looks to be making half-a-point or so of difference to federal polling, which is a very handy thing for Abbott to have had as he struggles to calm the horses ahead of the May budget.

Still more helpful will be a Coalition seat tally on Saturday that clears the bar set by Abbott’s more dubious colleagues as a measure of his ongoing viability — which, on present indications, is looking increasingly likely.

I often wonder how someone with Abbotts’ personality got to be leader in the first place. Do the public even give a stuff? Are we that disengaged from the whole body politic?
I feel that reporting standards in Australia are so bereft of talent and critical thinking, with one or two notable exceptions, that it is a waste of time even watching the news ( for politics).
I do not have Foxtel, so cannot comment on Skynews, but if it does follow the News Ltd mould , which is pretty much followed by the new Fairfax line ( infested by former News ltd writers), it is a waste of time, only showing 2 minutes of slogans and ‘Labor did it’ rubbish’ which is unquestioned.
Crikey provides an interning perspective but has no clout.
Overall Abbott, Hockey, Morrison, Pyne , Dutton, et al can do whatever they like, because a lazy, unprepared, and partisan media let the Abbott monster out of the box, and he is a ‘real piece of work’, doing whatever he likes, picking and choosing his ‘facts’. He will be very hard to move, what if he loses a party room vote and just doesn’t accept the result? I hope we are not living in ‘interesting times’.

Mike Baird may get tired of propping up the jet set party boy
pic.twitter.com/IqbDIYzeGX

David Marr has his doubts about Mike Baird and so do I. Smarm seems to work well with NSW voters, or is the stench of the Obied/Tripodi/etc legacy so foul and lingering that any alterative will do.
@ Alan, I can assure you that Skynews does mirror the Newscorpse view of the world.

I can see that Abbott will be grasping onto the coat tails of Mike Baird to boost his own popularity. Fine, but where does that leave the NSW and Australian electorates? I predict that talk of a soft federal budget will change after a predicted win for Baird. This actually makes me feel sorry for Baird who is obviously a decent person, but the fact is he is being used by Abbott, his mate! Well that seems to be what Liberal mates do for each other.