Why is The Age quizzing Nick Stevens' former teammates on what a great guy he is? And other media tidbits of the day.

Such a nice guy. What should you say about a footballer convicted in January, though he’s since appealed, of attacking his girlfriend? What a nice guy his friends think he is, evidently.

An article by Age football writer Jon Pierik was put online yesterday afternoon, and it began thus: “At his peak a decade ago, Nick Stevens was one of the AFL’s premier midfielders.” The article does mention his conviction — in the fifth paragraph — but goes on to qualify that it “surprised those around him”, who “don’t remember there being any issues” with his former girlfriends. It quotes former teammates who are sympathetic to Stevens’ plight, which makes it unlikely he’ll ever be a senior coach, as he had intended.

The article was criticised on Twitter yesterday, with News Corp columnist Rita Panahi slamming the tone of the article. “A bunch of unnamed ex-teammates saying what a good bloke Nick Stevens was …vomit,” she tweeted. Within a few hours, the article was removed from The Age’s website. It’s still cached by Google, but clicking through the link will get you a 404 error.

But the article does appear in the paper today. Appearing opposite a detailed account of Stevens’ appearance in the Magistrates Court, the placement does at least make clear the grave things he has been convicted of doing.

Crikey contacted The Age this morning to ask why the article had been removed online. We’ll let you know if we get a response. — Myriam Robin

Guardian schmoozes the Sydney media establishment. Two months after moving into new offices in Surry Hills, Guardian Australia had a launch party last night and invited a group of ad agency media buyers, and, somewhat unusually, the local media to check out their new digs. Seeing as we were invited, here’s what happened.

The discussion was largely commercial in nature — about all the ways The Guardian makes money. On the editorial side, Guardian Oz editor-in-chief Emily Wilson, who replaced launch editor and now global Guardian editor-in-chief Kath Viner last May, said that the local arm of the UK-based online news operation was now represented in six states and territories and employed 43 full-time journalists, with three larger news bureaux in Canberra, Melbourne and Sydney. Wilson said she had found that the local arm had about 2 million regular readers, up 50% in the past year. Apparently we’re a talkative bunch: Australians are very interested in serious news and analysis and commented twice as much as readers in other regions, she said.

Globally, The Guardian reports about 120 million unique browsers, 60% of which come from mobile devices. We discussed the fact that this was probably driving the increase in size of mobile phones, as they become less about making phone calls and more about media consumption.

Afterwards, we moved up the road to the Golden Age Cinema and Bar in the Paramount Building. There, we were able to take our cocktails, including a rye whisky-based one called the Wet Whistleblower, into the screening room to the see the documentary about Edward Snowden, Citizenfour. The Oscar-winning film, by acclaimed filmmaker Laura Poitras, is stunning; don’t miss it. — Margot Saville

Sky News Business says ‘what about us’? A slight addendum to our story yesterday on Financial Review Sunday, which Nine has axed after failing to find enough commercial sponsors for a third season. We mused on whether Australians were interested in watching business on the telly. Sky News Australia boss Angelos Frangopoulos insists they are, though maybe not, he concedes, in the half-hour blocks common to free-to-air broadcasters. “Sky Business is very successful, and profitable,” he said. “It’s one area where subscription television can work really well.” — Myriam Robin

Rupert lays the smackdown. Well, the news came through this morning that the BBC has sacked Jeremy Clarkson, the fantastically popular host of the fantastically popular Top Gear. An agonising call for the Beeb to make, but the correct one, since it appears to be not in dispute that Clarkson punched a producer of the show in the face, splitting his lip open, after he and the two sad Mini-Mes he does the show with arrived back at their rural hotel late at night to find there was no hot meal waiting. Late shoot, exhaustion? No, they’d been at the pub. Hitherto, and even now in the commercial sector, the producer would have got a quick 50 grand, a transfer of his choice, and on we go. But this is the Beeb, and also there were too many witnesses. Assault means an unsafe workplace, which becomes an industrial issue, so there is no other course of action. But not according to one expert: 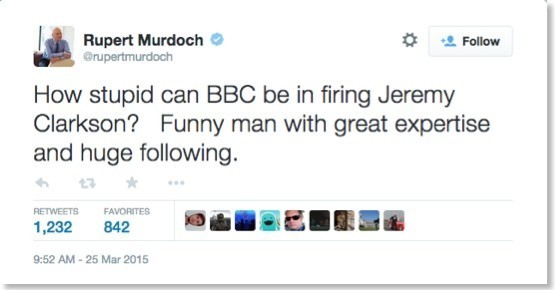 Got that, NewsCrap peeps? If your boss smacks you around, you may lose your job, but he or she probably won’t. In case the sight of dozens of Sun journos being shopped to the cops for hacking by NewsCrap management hadn’t let you know how little you are valued inside the organisation, that should be a reminder — Guy Rundle

The BBC from Belgium. The EU has surprised everyone by proposing the wholesale revamp of the area’s digital markets policies through the creation of  a single digital market. The changes, only proposals at this stage, have been drafted to address the growing obstacles to the ability of consumers and companies to access digital services and products across the 28 member countries from any of those 28 nations.

If the proposals are adopted, people from 27 other countries will be able to watch the BBC’s iPlayer service unhindered, buy cheap goods from any website they choose  and have the freedom to roam across the EU and use their mobiles, tablets and other devices without being slugged with high fees and charges by telcos. Government revenue challenges will be addressed through proposed tax reforms.

The EU Commission released the suggested reforms with the aim of boosting e-commerce, overhauling Europe’s telecoms market and making all media — whether films, music or television — equally available across the continent. Because so many developed economies are involved in the proposals, the move will have global implications, even in China.

Companies from Google (especially its YouTube operation) and Apple to Yahoo, The New York Times, 21st Century Fox (and others in the Murdoch empire), Comcast, Facebook, Twitter, Snapchat, not to mention Walmart, Carrefour, Aldi, Tesco, Microsoft, and even Warren Buffett’s empire will be impacted or face challenges if the single digital market idea for the EU come to fruition. Big music companies such as Sony and Universal face a particular challenge as well with their copyright.

The EU says “only 15% of consumers shop online from another EU country” — which is not surprising, if the delivery charge ends up higher than the actual price of the product. On geoblocking, the EU said “too many Europeans cannot use online services that are available in other EU countries, often without any justification; or they are re-routed to a local store with different prices. Such discrimination cannot exist in a single market”.

On copyright, it said it should be “modernised” to “ensure the right balance between the interests of creators and those of users or consumers”. — Glenn Dyer

Not Our Cate. Has Australia reached peak Blanchett yet? We must be close. The Mosman Marlene was extremely stroppy about an interview on The Project that was done in the Australian commercial TV house style, i.e. major dickhead. Missed opportunity to talk about a serious project? No, the movie being plugged was Cinderella, Disney’s latest contribution to pushing the body-image disorder threshold of young girls back to the pre-tween level — in which Blanchett plays the evil stepmother. She seemed irritated that the interview was interfering with the smooth global marketing of the movie, for which The Project was supposed to be no more than conduit. The idea that they might try to entertain their audience obviously plays second fiddle. Have we reached peak Blanchett? With tizzies like that we are getting a lot closer. No one’s crazy on evil stepmothers, but we don’t much like princesses here, either — Crikey contributor 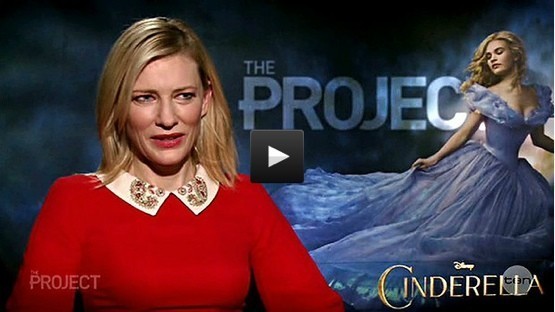 Video of the day. Last week, Will Colvin wrote a piece for Sneaky Mag on how he spent a month wasting time at news.com.au. Yesterday, Colvin reflected on that article. Sorta. 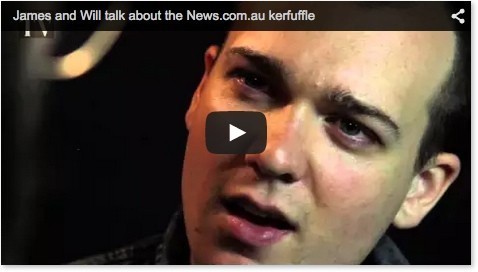 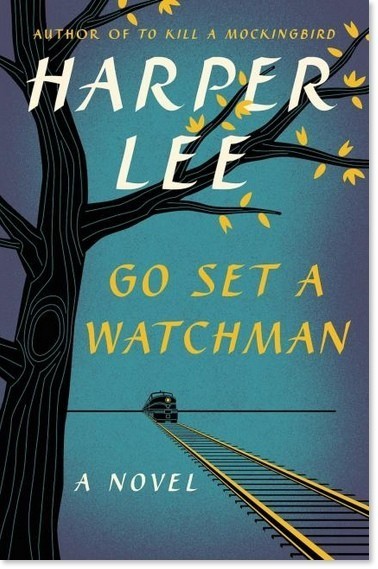 Nick the Prick. He betrayed Port Adelaide in 2003 and missed the premiership he craved in 2004. Character and karma.

As for his current woes, Port’s current coach has an axiom: “You get what you deserve.”

One of the ways that ‘The Guardian makes money’ is by paying shit money to freelancers. I wrote three stories for them before realising that I was receiving 30 cents a word. Maybe, Margot, reflect on that as you’re guzzling your Wet Whistleblower. And they call themselves Socialists.

Margot, interesting comment about phone size. The networks are making a killing out of us, giving free phone calls around Oz but charging a wopper for a kilobyte. The Guardian should write a leftie piece on that!