Pushing the envelope. The Australian’s contributing economics editor Judith Sloan’s most controversial writing is always published at right-wing group blog Catallaxy Files. She has a devoted readership there, but her missive yesterday was shocking even by her usual standards. At around 2pm yesterday, Sloan fired off an angry post slamming federal court Justice Richard Edmonds for a speech he delivered in January saying the superannuation system was “totally skewed in favour of the wealthy because of the opportunity for tax avoidance”. “I dare say if the ordinary man in the street had any knowledgeable notion of what certain sections of the community are getting away with in this regard, any resemblance of consensus would disappear,” he said, in comments reported two months ago in the AFR.

Perhaps Sloan was only alerted to them recently, because her post yesterday is white-hot with fury.

She says the public wouldn’t listen to judges on anything at all if they knew how much they were paid (she cites a salary for Federal Court judges of $412,550 a year, and retirement on 60% of their final salary until the day they die if they serve for 10 years or more). But then she really sticks the boot in:

“So to self-serving judges without much in the way of a knowledgeable notion, my suggestion would be to SHUT UP, lest angry people make a fuss about this issue as it applies to the judiciary and the semblance of consensus breaks down in respect of them alone.”

It was this that prompted a tipster to get in touch, shocked that Sloan, a board director at Westfield and an honorary professorial fellow at the University of Melbourne, would refer to a judge in this way. And not just any judge — Edmonds is one of Australia’s leading experts on taxation law, having helped form much of it through years of presiding over taxation cases in the Federal Court. He’s widely quoted and very widely respected on the matter, which is how he comes to be so often addressing assemblies charged with discussing tax, like the one in Adelaide earlier this year.

Sloan’s ad hominem is interesting. But just what does she think she’s doing telling Federal Court justices to “SHUT UP”?

Tasmania welcomes prodigal son. Author Richard Flanagan was honoured last night in his home state of Tasmania at a a reception at Hobart’s Parliament House. The event celebrated Flanagan’s novel The Narrow Road to the Deep North, which won the prestigious Man Booker prize last year. Flanagan told the audience that he was happy knowing how much the award meant to his fellow Taswegians. “So I am honoured and delighted that I can be here today sharing the Man Booker Prize with you all, because it really is a prize for everyone.” The event was attended by Premier Will Hodgman and Minister for Arts Vanessa Goodwin, who both made speeches about Flanagan. It’s an interesting turn around, in 2004 former Tasmanian Premier Paul Lennon (then deputy premier), said “Richard Flanagan and his fiction is not welcomed in the new Tasmania” after Flanagan had spoken and written about the timber industry’s relationship with the Tasmanian government. Last night Flanagan donated $2000 worth of books to his old primary school. Does this mean that we are now experiencing a new-new Tasmania, where Flanagan and his work are welcome?

Bolt’s anecdotes no picnic. While the obituaries of former prime minister Malcolm Fraser have been somewhat confused about how to deal with his political legacy, News Corp’s Andrew Bolt has had no such confusion, using his column in yesterday’s NT News to rail against the Left, under the headline “Vicious hate of Left clue to Fraser’s drift”. Our tipster had a problem with this line:

‘The mob, whipped up, seemed capable of anything … His wife feared he’d be shot. Someone even broke into their home and left a note on the table: ‘I’ll fix the kids and be back after lunch for you.'” 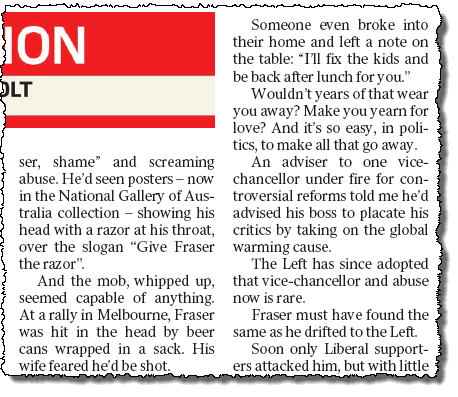 The anecdote about the note doesn’t appear in the blog post of the piece, and our tipster tells us why:

“Margaret Simons (with Malcolm Fraser) in their book, Malcolm Fraser The Political Memoirs (page 317):  ‘The (Fraser) family had planned one of their customary picnics with the children in the paddocks, but as they packed and got ready to leave, Fraser was caught on the phone. Tamie scribbled a note, left it for him, and departed with the children.  She returned later to find Nareen in a state of siege, with security officers on high alert.  She was told they had found a threatening note on the table.  They showed it to her: it was her own note to Fraser.’

The wording of the note, in big black texta, was the same as quoted by Bolt.”

Lefties and wives, they are dangerous.

The future is now. What do you do if you have a decent political slogan but it needs a bit of an update for the 21st century? Put a hashtag on it. The Australian Democrats are running this online ad in the lead up to Saturday’s NSW election — they tell us it’s “funny but serious”: 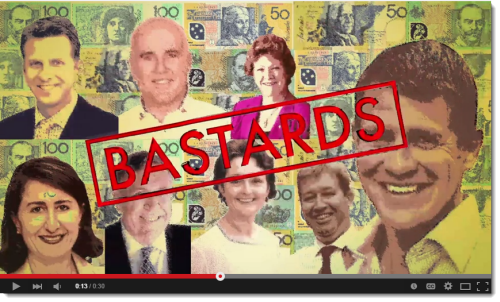 Also on the topic of the NSW election, this sign advertising a Christian Democratic candidate in the seat of Penrith has garnered international attention for its tagline “no mosques”: 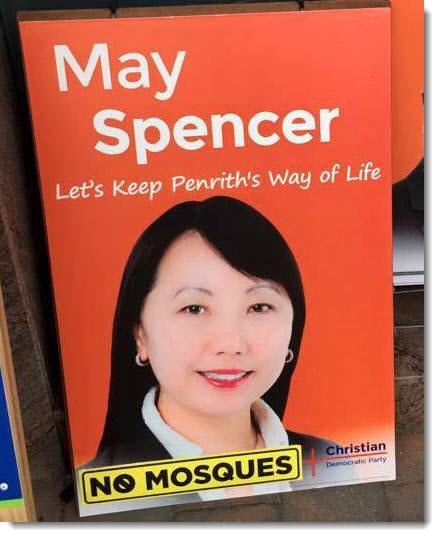 Fighting freedom — for or against? The Australian Liberal Students Federation is running a counter protest to today’s National Day of Action run by the National Union of Students — the ALSF is calling it the “national day of learning”, and they are going to class instead of marching in the streets. Very controversial, we’re sure. We couldn’t help but notice that their website touts themselves as “your campus freedom fighters ets. 1948”. Does that mean they fight for freedom against free speech and protests or freedom to protest? We hope that they are feeling very free as they hit the books today.

Fraser’s political manifesto not all it seems

Malcolm Fraser: a champion for immigration and a bigger Australia

Well, the Blot, getting to the heart of things, as always. It astounds me that people actually read and believe, his columns.

I eagerly await the correction from Blot. I note his penchant for correcting others and pointing out their mistakes, so I know he’ll hold himself to this same standard.

Judith who? Not the Judith that does the economics and financial stenography for Limited News publications?

Oh I remember the same Judith that gave Joseph Stiglitz a ticking off on a crappy ABC Monday night forum some time ago. Yep same Judith.

Sloan’s ad hominem is interesting. But just what does she think she’s doing telling Federal Court justices to “SHUT UP”?

I’ve said it before and I’ll say it again. It seems like the neoliberal right think they’ve reached the endgame, so they’re not even putting up a facade of decency and propriety anymore.