The 10-day election: what if everyone voted below the line?

There are an extraordinary 394 candidates for 21 seats in NSW's Legislative Council this year. What if every voter carefully considered and ranked them all in order of preference? Brihony Tulloch investigates. 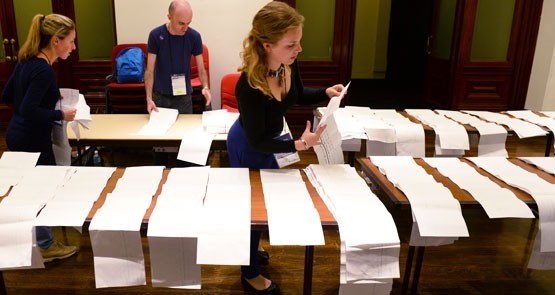 The 2015 NSW state election is this Saturday, March 28. With a record 394 candidates in contention for 21 seats in the upper house, this year’s ballot paper comes in at an impressive 1.02 metres long. It’s no surprise that voters are deterred by this imposing document and prefer to vote above the line — but what if they all numbered each box?

Crikey decided to test the functionality of this year’s ballot paper. For the purposes of this experiment, we found a list of 394 random names, and I read, considered and numbered each one in order of preference. The whole exercise took 30 minutes and 20 seconds, which I believe to be a very conservative figure, as voters might want to consider each candidate, party and policy before numbering.

What happens if god forbid you lose count, which is very easy to do with nearly 400 candidates to consider? (Though it should be noted, NSW has optional preferential voting: according to the NSW Electoral Commission guidelines below the line voting is only considered formal if preferences are marked clearly starting with No. 1, and a minimum of 15 boxes must be marked.)

And how long would it take if everyone were to vote below the line? There were 4,290,595 voters at the 2011 state election, if every one of those people were to order the 394 candidates at this year’s election for 32 minutes and 20 seconds at the 2741 polling places throughout NSW, we estimate it would take 790 hours, or (assuming that 10 people can vote concurrently at each location), a full three 24-hour days. Or, assuming electoral staff only want to work eight hours a day, it would take 10 and a half days. And that’s just the upper house.

Given this, it is no wonder that most people vote above the line (more than 95% in some elections, like the WA contest for Senate in 2013). It has been said that this may be due to the unwieldy ballot papers. The trend of above-the-line voting resulted in a very low informal vote rate of between 2.96% and 3.75% since it’s a simpler system for voters.

NSW has had optional preferential voting since 1980. According to the ABC’s poll analyst Antony Green “this makes preference flows much weaker at NSW elections [since] minor parties ‘exhaust’ their preferences before reaching one of the final two-candidates in each contest”. As a result, optional below-the-line voting makes it “much harder to come from behind and win compared to elections under the Federal compulsory preference system”.

Speaking of the impact of preferences, the No Land Tax party has nabbed top spot on the NSW ballot paper. First is a highly coveted position on the paper, as voters who don’t wish to make a choice simply put a ‘1’ in the first box, otherwise known as a donkey vote. While the AEC has no conclusive data on the influence of the donkey vote, it’s said to account for 1% of submissions.

The power of first position on the ballot should not be underestimated: “In the 2013 federal election, the first position on the senate ballot paper gave an advantage to the Liberal Democratic Party. It ensured a senate spot for the LDP’s candidate, David Leyonhjelm, who is now one of eight crossbenchers who hold the balance of power”.

With regards to the No Land Tax party nabbing the donkey vote position, can anyone shed any light on why, today, the order of candidates is not randomised on every ballot paper ?

I voted last Saturday, ostensibly because I am going away, and have decided to be away for all future elections. That voting paper was enormous, and as a devout anarchist, I wanted to fill in my votes, until by 154 even my anarchist ways gave over to lethargy.

And it’s quite difficult to put 3 figures into the little boxes in a legible way, especially as a full vote would see you put 1074 digits into little boxes, at my rough count.

My wife did, but she is much more determined than I am, insisting on going all the way to put the shooters last. No preference distributions from this family.

And just how long would it take to count if everyone numbered them right through? A 10 day election and 3 months to declare an outcome.

An improvement would be if they had regions (as in Vic) rather than one electorate for the whole state (which still works reasonably well in SA where we have fewer reps), but of course a change like that could be hard to implement in practice since everyone has to agree on the details and all parties will most likely push for whatever is likely to work best for them. Unfortunately the current fix – optional preferencing, while making voting easier also means mandating 15 candidates to get a box above the line which only makes the ballot paper size problem worse.

@ Dogs breakfast…I admire your wifes commitment, well done that woman. I’d like to follow her lead but last place would be a tough one. As well as the shooters there’s so many who really deserve last place.

The great thig about usig iVote is that it records the below the lie numbers so it was easy to do the lot without becomig confused.
As noted above, the greates problem was who to place last – so many utterly worthless scum that I was tempted to do an Alby Langer but ‘computer sez no’.