Ed "Two Kitchens" Miliband has an inexplicable lead over David Cameron. But neither of them can deliver workable government. 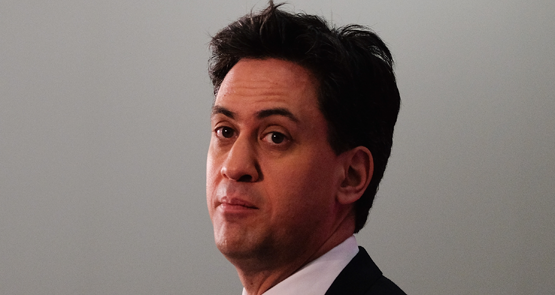 There’s one important rule of British life, which is never get into a situation where you’re compared to a Monty Python sketch. As soon as someone says “People’s Front of Judea” or “dead parrot“, you’re in trouble.

Thus it was last week that Labour leader Ed Miliband found himself in deep, deep trouble. The occasion was a dumb “at-home” feature piece, featuring Ed Miliband and his wife in their modest — i.e. 2 million quid, three-storey — terrace house.

Key feature was the Milibands photographed in their dowdy, small kitchen, looking dowdy if not mildly depressed themselves, a classic of British miserabilism. The photo attracted a snarky comment from Sarah Vine, a Times columnist married to Michael Gove, former education secretary, the real boy to Christopher Pyne’s Pinocchio.

Vine described the kitchen as “Soviet-style”, perhaps an attempt to keep the idea going that Labour was now run by left-wing revolutionaries. In order to dispel this rumour, helpful Milibands-friend and Guardian columnist Jenni Russell tweeted that the Milibands’ in fact had two kitchens, and this was just the smaller one to make snacks etc:

Mere hours later, Ed was being known as “two kitchens” — reported by the press as reminiscent of Blair-era Labour deputy PM John Prescott, whose two official cars got him known as “two Jags”. But of course both were a reference to Arthur “Two Sheds” Jackson, the avant-garde composer invented by Pythons, whose star interview turns into an interrogation as to why he would need two garden sheds.

When you’re in the Python zone, you’re in trouble — and this was another example of the utterly hapless performance that UK Labour has put in over the past months. With a shadow chancellor going on TV to claim that Labour had any number of business backers, and then failing to remember the name of the most prominent one, or indeed any, an inability to give a clear line about how they would deal with the Scottish National Party (which could put Labour into government but never the Tories), the party’s supporters have begun to despair. They couldn’t even spin a messy series of arguments about TV debates correctly, ending up with one seven-way debate between all the parties, and nothing else.

Having got the drop on David Cameron — who had wriggled and squirmed out of a head-to-head debate — how had Miliband been bested by him? It was a mystery, supreme sleight-of-hand, and showed the Tories to be the superior political performers. Reports from inside the Labour camp were of pure shambles, with internecine warfare delaying basic things, such as a final wording for the “manifesto card”, a mailout of basic campaign points that goes out to millions of supporters. In the end each local outfit was told to pick its own from the points on offer.

Yet those who may be truly despairing at the moment, for all their bluster, are the Tories — for despite all their onslaught of policy announcements, initiatives, and Cameron’s assured style, the polls stubbornly refuse to move. Labour retains a one- to three-point lead over all polls but a couple of outliers, and that’s really a four- to seven-point lead given the skewed distribution.

Nothing has shifted this margin for months now. For a time, the Right believed that, even if this margin stayed right up to the last weeks of the campaign, the pressure of the final push would expose Miliband as a weak leader that people couldn’t trust and also shift a slice of UKIP’s 15% polling back to the centre.

Now, many are starting to contemplate the possibility that this won’t happen — not because Miliband will get any better or more liked, but because people are voting with almost no regard for the performance of the leaders. Nothing Cameron or Miliband do well or badly seems to be making an impact on the polling (whether Cameron’s recent brain fart in which he said he would serve only two terms, and thus set a pack of hounds running, will have any effect at all, remains to be seen), and nothing the Tories promise on social policy appears to draw any votes from UKIP. No amount of chaos inside UKIP — with two more of its MEPs (are there any left?) gone in recent days, on accusations of fiddling their expenses — seems to disturb the party’s supporters, even as it makes clear, or should do, that the elite of the party is filled with shameless carpetbaggers exploiting the simple innocence (read: deep, often pernicious, stupidity) of the party base.

The Tories only need to nudge one seat ahead of Labour to get first crack at forming government — with the most Tory-friendly polls currently saying they will get 273 seats to Labour’s 271 in the 650-seat Parliament. But that would damn them, because they could get only around 30-35 more seats support (22-26 Lib Dem, five UKIP, nine Democratic Unionist Party) for a minority government, thus falling well short of the rough majority one might want to survive for any length of time.

Labour, by contrast, on those numbers, could cobble together a program acceptable to the 52-60 SNP, Plaid Cymru (Welsh Nationalist) and Greens MPs, and the 25 Lib Dems, and thus have a claim to a minority government with a working majority on confidence and supply. Which suggest the situation may prompt a constitutional crisis — for what if Cameron, with a small lead in seats, were to assure Her Madge that he could get through an initial confidence vote (if the SNP abstained for example, as a wait-and-see tactic), even if there were no real prospect of getting a Tory budget through in the future?

The question then — to which there is no clear answer — is: does the Crown make a decision with some regard to these probabilities and practicalities, or simply act on the assurance of the man who is still commissioned as prime minister? Technically, it is the whole of the Parliament that is sending someone forward to the crown to claim first go at forming a government, but that has always been an abstract fiction, and the contradictory nature of winning a “dead” plurality will show it up as such.

There would also be a weird legitimacy effect — should Cameron slither back in, he would have the air of legitimacy even if his minority government had no real support at all. However, should Ed Miliband become PM — the Man Who Was Never Meant To Be King — on a stronger base, he will nevertheless never be regarded as fully legitimately there by a section of the population. That could prompt electoral reform, but I doubt it. I suspect it would simply promote a further disengagement between public and politics, a torpor on the Left, and increasingly mad outgrowths on the Right.

Which is to say that the left-right split would yield to one between the Sensible Party and the Silly Party. Which is, of course, a Python sketch …

Love the Arthur ‘two-sheds Jackson’ skit, or perhaps the skit with the man with three buttocks is as good for this purpose.

“So Mr Milliband, you have a ahmmmm, 100% increase in the urrmm, kitchen department.”

I just have a few more years to pass on all Monty Python sayings to the young ‘uns.

GR, any news on the electoral prospects of Tarquin Fin-tim-lin-bin-whin-bim-lim-bus-stop-F’tang-F’tang-Olé-Biscuitbarrel, for the silly Party?

For sheer howling at the moon mad, mind bendingly banal and grotesquely terminal a society as the current sludge that is modern Britain, Grundle must be lunching on Mogadon muffins to have turned in so slight a piece.

Hi DB, I personally know Tarquin from Adelaide. Absolutely brilliant mathematician and genuine good bloke. He once applied for the position go Governor of the Reserve bank only to be pipped at the post by the dude from the super ad’s. I went to court with him one day and the magistrate addressed him as Mr Barrell. He soon corrected him