Turnbull says SBS hardly earns any commercial TV revenue, so the networks should stop complaining. And other media tidbits of the day.

Turnbull hits back at Free TV Australia. As Crikey has often written before, the commercial TV networks are up in arms about plans to allow SBS to double its advertising in prime time by allowing it to average out the number of ads it airs over the whole day (provided it airs no more than 10 minutes an hour).

Free TV Australia yesterday released the latest press release slamming the proposal. “The proposed Bill in effect creates a new commercial broadcasting licence by stealth,” Free TV chairman Harold Mitchell said. “SBS will have the same amount of advertising in prime-time as commercial broadcasters and they will target the same advertisers with their programming.” The body cited analysis conducted for it by Anomoly, a market research agency, which found SBS could earn just under $150 million in extra advertising over four years.

Yesterday evening, Communications Minister Malcolm Turnbull responded on his blog, writing that SBS’ total ad allowance over a day remained a third of that available to commercial broadcasters. And anyway, he continued, SBS ad revenue was a drop in the bucket of the total $3.9 billion TV advertising market. To prove his point, he includes the following table, showing how much the TV networks dwarf SBS in TV ad revenues: 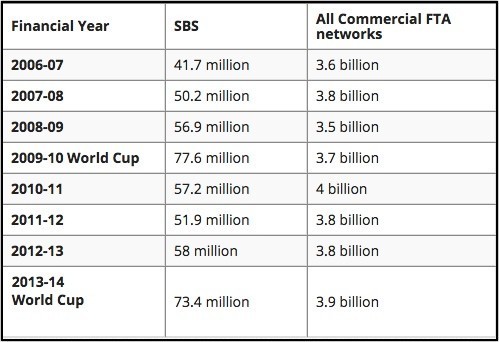 Of course, TV ad revenues, while significant, have been challenged in recent years, which explains why the networks are so worried by an increase in SBS’ ad inventory. Extra space on SBS prime time could plausibly absorb all the revenue growth in the sector in the first few years. The bill, however, is not expected to pass the Senate. — Myriam Robin

Plane-less Fairfax. If you wanted any clearer evidence of why Fairfax Media under Roger Corbett (chair) and Greg Hywood (CEO) has thrown the towel in so far as being in the news business is concerned , take a look at the Sydney Snoring Herald this morning. It missed the crash of the Germanwings plane in France, and it also missed the result of the cricket World Cup semi-final in Auckland — and yet The Australian had both, as did The Daily Telegraph in Sydney. And at the SMH? No crash report in the paper and a cricket match report that stopped when Kiwi captain Brendon McCallum was dismissed early in the Kiwi innings on pages 42 and 43, buried in a column by Greg Baum. That’s treating supporters of the print editions of the SMH with utter contempt. No wonder sales are sinking. — Glenn Dyer

Tele’s plane-surplus. There was no shortage of planes in the Daily Telegraph this morning, including on the front page. The crash was covered on page 2. Was it the best day to make that pun? 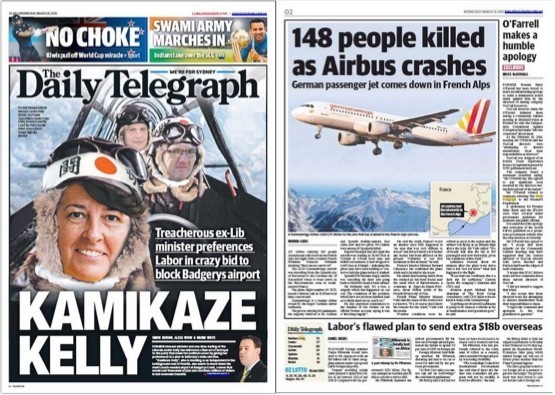 Front page of the day. An unsettling encounter for Barnett, a brilliant photo for the Koori Mail … 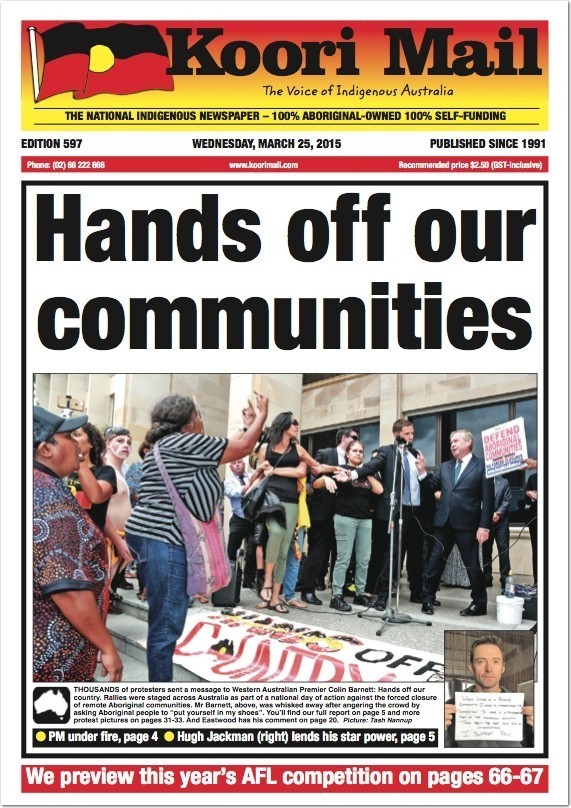 At least the Age app was up to date on the plane crash, but standards really have fallen – the number of Sydney-centric articles in the Age these days is abysmal.

would it not be more accurate to compare SBS with each of the networks TEN, 7, 9 individually – as SBS & ABC make up government networks – the others make up
commercial networks.

So TurnBULL is really misleading everyone.OR he doesn’t know the difference.

The use of figures by the politicians is for support not illumination.

Free TV Australia van feel free to pay for all the additional spectrum that they were given for ummmmhh, free!

I’d be more supportive of their cause if that largesse wasn’t gifted to them by, who was it now, Rudd?

Most unsettling about the Koori Mail pic is the number of heavies as security, at least half a dozen, but look at the undercover/plainclothes type who has the woman gripped around the waist, another shaded spook trying to drag her arm off and a third rotund one about to leap to Barnett’s defense.