Political discussion returned to business as usual, despite the release of the damning Moss Review into the Nauru detention centre.

With a brief political pause to honour the passing of former prime minister Malcolm Fraser, everyone at the top resumed their places as now-independent Senator Glenn Lazarus dropped straight back out of the Top 20. NSW Opposition Leader Luke Foley rises to sixth and Premier Mike Baird to third in the last days of the election campaign. In “normal” times this election would be a foregone conclusion, with a popular premier, strong NSW economy and sophomore bounce for many MPs countered by a significant correction from the record lows Labor achieved last time resulting in a swing of perhaps 10 seats, but these are not normal times in Australian politics.

Social Services Minister Scott Morrison was the main mover into the top 10, but it’s all to do with his former portfolio of Immigration, with Morrison rejecting calls for him to apologise to Save the Children workers after allegations against them from Nauru that he referred to an official review were found to be unsubstantiated. His successor Peter Dutton was also a big mover due to the broader findings of the Moss Review, which found evidence of sexual assault and drugs inside detention centres. Finance Minister Mathias Cormann had a big jump as well, and Foreign Minister Julie Bishop took second spot as leaks of further cuts to the foreign aid budget raised tensions inside the government and criticism of the Expenditure Review Committee. 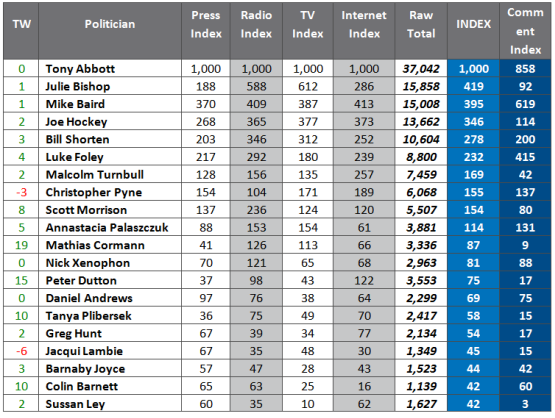 New South Wales Premier Mike Baird still number one on talkback, but the numbers are pretty low across the board, which in polling terms seems to be good news for Tony Abbott as he sticks to the new “dull and routine” budget line.

Tony Abbott is gradually slipping lower in social media coverage as those who took the juicy odds on him still being PM at the next election start to feel more comfortable, while Education Minister Christopher Pyne’s interview with David Speers had many amused.

We had the paleo diet here last week, and this week it’s the palaeolithic TV presenter, as the always uneasy marriage between the BBC and Jeremy Clarkson finally ends, the huge amount of money Clarkson has made for the organisation finally being outweighed by his bad behaviour.