Fin Review Sunday gets the boot

Financial Review Sunday is no more, with Nine axing the program for not being commercially viable. It's just the latest in a long line of failures to make business journalism work on TV, write Myriam Robin and Glenn Dyer. 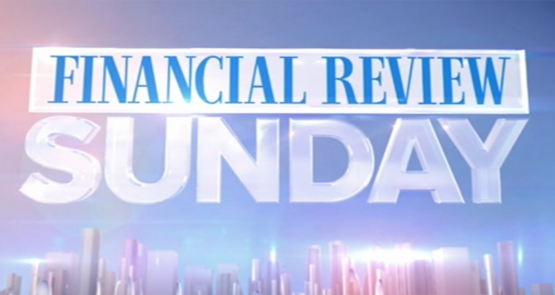 After two seasons, Financial Review Sunday is no more. Nine has officially pulled the plug on the TV program, which hasn’t aired since the start of ratings season in early February. Crikey was told then it would be back after the Easter break in the second ratings period. But a Nine source told Crikey: “It was not commercially sensible to have the show return this year.”

AFR editor-in-chief Michael Stutchbury elaborated, telling Crikey that “advertising support as not sufficient to keep the show on air this year”.

“We have all enjoyed the experience and learned a lot in the process,” he said. “We would be happy to do it again with Nine if the commercial environment allowed.” There aren’t plans to take the show to another network, Stutchbury said.

The show’s axing was revealed by Fin’s Rear Window columnist Joe Aston earlier this morning (he appears on the program). He quipped that the program struggled to be commercially viable given “defamation costs associated with the Rear Window segment and a class action launched after the screening of repeated CPA Australia commercials allegedly caused audience trauma”. That’s a joke, as Crikey had to clarify the morning — no one actually sued the program over what aired on the Rear Window segment, usually hosted by Aston himself.

But the comment about the ubiquity of CPA advertising is telling. CPA was a launch partner, but given it produces a business program called The Bottom Line on Nine with its CEO, Alex Malley, it’s not clear if it paid much for the copious extra ad time on Fin Review Sunday. The other launch partner, Westpac, was seen less and less as time wore on.

The program never regularly attracted more than 200,000 viewers nationally, and the most affluent and educated viewers, those most likely to be interested in a financial program like Financial Review Sunday, were spoilt for choice with a strong Sunday morning lineup on the ABC of Insiders at 9am followed by Offsiders at 10am (which directly competed with Fin Review Sunday). The ABC has historically been pretty good at keeping viewers who watched Insiders tuned to the program for Offsiders. And of course, we can’t forget The Bolt Report’s efforts at 10am for an hour on Ten, which attract around 180,000 to 200,000 national viewers

The program is only the latest in Australia’s numerous failed attempts to make business and finance work for a TV audience. Nine had previously aired Business Today (fronted by Michael Pascoe) and Business Sunday. It also had the Small Business (hosted by Janine Perrett). Nine also had the more populist Money program, which lasted for a while but couldn’t sustain viewer interest or involvement (how many times can you write an interesting story about annuities or superannuation?).

For all the $2 trillion of super, high levels of investment in shares, negative gearing of property investment, Australians are not just not interested. The pages of financial advice in newspapers and magazines have shrunk. Magazines such as BRW have passed away and now live on in cyberworld. Presenters such Paul Clitheroe (Money)  and David Koch (now fronting Sunrise, but still fronting a small business program on Seven) have other lives. Ten in the past had a brief dip into business journalism with The Bottom Line, hosted by Max Walsh, a former AFR editor. The ABC has had a number of goes, and now runs the Ticky Fullerton-hosted The Business, which was moved onto News 24 in the most recent shakeup late last year.

Media briefs: TV ads rule … except the political ones … no more <em>Footy Show</em>? …

As <em>Restaurant Revolution</em> goes up in flames, is this the end of reality TV?

We’re proud to continue to invest in and expand Australia’s first and only 24 hour business channel SKY NEWS Business. LIVE and compelling business news can succeed on Australian television.