What Joe should tell his colleagues about his budget

Joe Hockey's budget message has been complicated not just by confusion within the government but by the government's readiness to look after its mates. 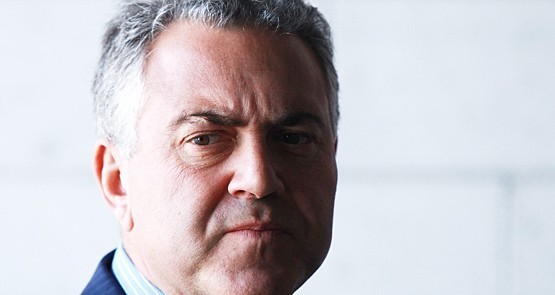 One of the most enjoyable games in Canberra currently is trying to work out who was behind, and who benefits from (two separate questions) the leaks that regularly drip from this shambles of a government. Yesterday someone decided to ruin Julie Bishop’s carefully prepared “innovationXchange project” announcement, for which she’d co-written an op-ed for The Australian, by telling Tony Abbott’s close friend Greg “George W. Bush will be judged one of the great presidents” Sheridan that her foreign aid budget was going to be cut.

Foreign aid cuts, it should be noted, are popular under both sides of politics when the budget gets tight — it doesn’t affect demand in the domestic economy (beyond the impact on Australian companies that siphon off “boomerang aid”), and the only victims are non-white people who don’t vote here. Bishop, who has already coughed up around $11 billion in foreign aid since the election to the budget bottom line, figured her portfolio had made quite enough of a contribution and said she’d be Asking Questions. Mathias Cormann and Joe Hockey professed not to know where anyone would get the crazy idea that they might cut foreign aid again. As if to reinforce the point, in Parliament Bishop engaged in the sort of shameless mugging that would be out of place even at the local amateur dramatics society, only barely managing to restrain herself from planting her face on the Table of the House while Hockey lauded the Expenditure Review Committee. Suddenly, foreign aid cuts appear to have been ruled out of the budget. Wonder who benefits from that?

Every leak — indeed, everything in the place — is now viewed through the prism of the leadership, but most especially the budget, due in just a few weeks. Last year, the story goes, Hockey and Cormann (who was saddled with two jobs after the sidelining of Arthur Sinodinos) took too long to get going and ended up accepting a suite of Treasury savings and reform proposals without thinking through either the shape of the overall package — now admitted as too much, too soon — or how to sell individual measures. Major reforms like higher education deregulation were unveiled in the budget with no consultation with the relevant sector or preparatory work on the electorate, as if they’d sprung out of Zeus’ head, or more correctly Martin Parkinson’s head, a parting thank-you to the government that sacked him.

This time around, as we enter what is traditionally budget leak season, the theme is chaos and confusion, with Bishop said to be wondering aloud in cabinet what the government thinks it is doing and Hockey asked by the Coalition party room to explain the same thing.

A coherent explanation might go something like this (Hockey’s actual explanation is here): the starting point for the 2015-16 budget is a deficit of around $30 billion — $10 billion less than this year’s forecast, which means the Commonwealth will be notionally reducing the overall level of stimulus it is applying to the economy. But the continuing fall in commodity prices and a sluggish economy mean that $30 billion deficit will likely worsen significantly unless the government slashes spending. But barring doing all the slashing in foreign aid, trying to preserve that deficit will mean less economic stimulus at a time when growth might have fallen to just 2% annually, and politically unpalatable choices about what to cut. But despite the need to avoid big cuts now, there are long-term savings the government could continue to make that would put the budget on a path back to surplus beyond the forward estimates without crippling growth.

The main problem with that narrative is this is a government that is much better at walking away from long-term savings and revenue measures than toward them. It handed $9 billion-$10 billion in tax revenue back to its corporate mates by dumping the carbon price and mining tax. It has steadfastly looked after the well-off — rich superannuants got several billion in tax concessions, the smirking parasites of the novated lease industry got a billion. The backbench is pressuring the leadership to drop the scaling back of aged pension indexation. Hockey has now ruled out any changes in the budget to the super tax concessions that will cost the budget $30 billion this year, kicking the subject into touch by saying it’s a matter for the tax white paper process. And the government is busy doing nothing on multinational tax avoidance — and in another handout to its rich mates, even plans to reduce tax transparency for private companies on the absurd pretext that wealthy people might be kidnapped (presumably by Gen Y kidnappers who won’t buy a copy of BRW‘s Rich List but who can trawl through the Tax Office website).

All of that is before you get to decisions like the co-payment and high education funding cuts that hit the fence due to the government’s inability to sell them properly and get Senate backing.

And at some point, there was — and presumably still is — supposed to be an announcement about a childcare assistance package, intended to be revealed separately from the budget.

The budget is supposed to be the big political setpiece of the year for a government, enabling it to set or reset the political and economic agenda. After just one from this government, however, the budget seems to have gone from being an opportunity to becoming a kind of nightmarish passage through which it can only hope to travel without major damage, and certainly not the place to reveal something positive for voters. Perhaps that’s what Hockey should have outlined to his colleagues this morning: the budget strategy is get through till the end of May without political catastrophe.

When it comes to EPL, Optus stays in possession of the ball

How a former Family First leader and a property mogul run a network of online anti-vaxxer, anti-Dan Andrews groups

Senator Bragg and the weaponising of Coalition grievance: is an ABC ombudsman coming?

Perhaps Crikey might be as successful as the famous three witches watching the cauldron bubble in its predictions; but the content of its supposed ‘analyses’ of economic matters is certainly on a par with the sorts of content beloved by Shakespeare’s broomstick trio.

Almost everything one reads about the upcoming budget, and this is no exception, primarily focuses on the expenditure side and what might be cut therein. One looks, often in vain, for an intelligent discussion about how the other side of the equation, revenue, might be addressed. Norway and New Zealand, to take just two examples from opposite sides of the planet manage this in a vastly better manner.

One’s concern about the imbalance in the debate is enhanced by the profound suspicion that much of the governments objective seem to be driven more by ideology than rational social and economic policy.

James, the reason is simple. Labor and the Coalition know that going after revenues they both believe to be appropriate and essential will be misrepresented by the other side against whoever moves first. Labor Federal Leader Bill Hayden summed it up well when he told a closed National Executive Meeting that this meant both sides ended up having to pander to small selfish minorities which would decide who won.
Even if they reached agreement on what was good for the Nation, irresponsible [in its non-pejorative sense] would drag votes away from them. Today, with the sprouting of ever-more minor Parties, the situation is far grimmer.
That’s one of the reasons Western Democracies face enormous crises.

I’m almost ready to concede a real benefit from the Data Retention Bill. But I bet no government ever uses it to uncover its own leakers!

Laurie, if only Crikey et al would concentrate their efforts on your suggestion, rather than just beating emotive drums, they’d make far more sense.