The death of Singapore's Lee Kuan Yew should remind us that much as he gave Malcolm Fraser some excellent tough-love advice, it might be time to return the favour. 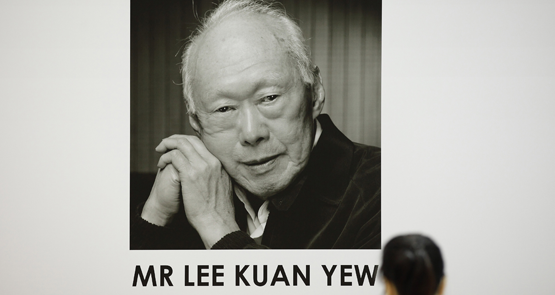 There’s a certain symmetry about the deaths, within days of each other, of former Prime Minister Malcolm Fraser from Australia and Singapore’s first prime minister, Lee Kuan Yew.

It was the paternalistic, authoritarian Singaporean leader who called out the fatal flaw that would destroy Fraser’s prime ministership when he warned in 1980 that Australia risked becoming the “white trash” of Asia without a commitment to economic reform. Fraser’s economic weakness and refusal to take advice from his very competent treasurer, John Howard, to institute the recommendations of the Campbell Report (which would later underpin the success of the subsequent Hake government) plunged the country into recession ahead of electoral defeat, leaving a lifelong scar that Fraser’s outsized ego would never admit was self-inflicted.

Lee, a once-in-a-generation strategist, certainly understood Singapore’s unique position in the middle of what would become the world’s busiest sea lane, as well as in the global economy. Singapore is today unique in the world, and its money helps to underpin the Australian economy by being our fifth-largest foreign investor (with total asset stock well ahead of China) and Australia’s No. 5 trading partner — but it has the largest trade bill with Australia per head. In 2015, Lee’s frustrated sniping has been replaced with a relationship that ranks only beneath the United States, China and Indonesia in overall importance, and of those four Singapore is probably the least problematic and the closest to a partner of equals. It is also, perhaps, the only county in the region that Australian governments have felt consistently comfortable making key to Australia’s mission to mend its fraying relations with an increasing number of its neighbours.

While economic ties between the region’s largest and smallest island nations are intertwined, it is the close nature of defence relations between our two countries that stands out. Australia’s defence ties to Singapore are closer than those with any other country in the region, although Tony Abbott’s embrace of Japan has added that country to what is a very short list.

In 1971 Singapore and Australia (along with the United Kingdom, Malaysia and New Zealand) joined the Five Powers Defence Agreement, which is aimed at protecting the Malay Peninsula. Australia trains Singaporean Air Force pilots as well as providing other defence support.

Lee’s death comes only four months before the 50th anniversary of Singapore’s statehood, and the nation is in good shape, despite rising problems with overcrowding and an emerging two-tier society of well-off locals/expatriates and the estimated million migrants who fill lowly jobs.

It is the financial fulcrum of the Association of Southeast Asian Nations, which will finally embark on its Economic Community experiment on December 31 this year. Mining behemoths BHP Billiton and Rio Tinto have sited their marketing operations in Singapore, close to their main markets in north Asia but avoiding the serial corruption that plagues Asia and caused reputational damage to Rio Tinto in China during 2009, when five salesmen, including Australian Stern Hu, were detained and later jailed for taking bribes and undertaking industrial espionage.

Singapore is also well positioned to benefit as mainland China tightens. Perhaps it was fear of the yellow peril that convinced Peter Costello and John Howard to pass up a golden opportunity for a slice of this trend when they rejected the bid by the Singapore Securities Exchange to buy its Australian equivalent. Unfortunately that deal is now firmly off the table.

Yet, for all its economic success, the dark side to Lee’s Singapore has been a smoke-and-mirrors democracy. It is an effective one-party state that operates an only nominally independent legal system, using the fig leaf of its common law base to pretend it is embracing rule of law while actually allowing the government to run roughshod over the rights of critics. Singapore allows both corporal and capital punishment.

Australia, at least for the foreseeable future, has escaped the fate that engulfed resources-rich countries in South America, led by Argentina, which rode on their natural bounty without instituting economic reforms.

Australia should now return the favour to Singapore with some difficult home truths of its own and ratchet up pressure on Singapore’s government-cum-ruling aristocracy to make vast improvements to its oppressive censorship laws, detention without charges and the continued use of state-sponsored assault of its own citizens so it can truly lead the region by example — not just economically but also in terms of freedom and that underrated, old-fashioned principle of respect and decency towards all.

Singapore’s current Prime Minister, Lee Hsien Loong, has already made significant strides in making Singapore a more interesting and liveable place — although homosexuality, for instance is still outlawed. If he loosens up rules impinging upon personal freedom and lets Singaporeans live a little, as well as enacting political and economic reforms, then the man they called Harry Lee will truly have given Asia an exemplar nation.

For all its promise, Singapore’s ruling party still holding it back

Having spent a significant part of my life in Singapore with Lee Kuan Yew as PM I am not a fan. He was anti-democratic and justified this authoritarianism by claiming credit for the island’s economic progress.

Rubbish I say. In a fairer and more open society where creativity was not stifled under the pressure of conformism I believe Singapore would have prospered much more.

Singapore grew despite Lee not because of him and primarily as a result of its location.

The unrestrained power of the Lee family would not bear close scrutiny if there was an inquiry on corruption and such corruption always limits economic growth.

I’m not quite across how Singapore did what it did, and what it did is remarkable, but I am with Pav. Politicians always take credit for events that are positive, whether they were the architects or not. This is as it always has been. How would they have gone with a fair dinkum democracy and personal freedoms?