Could it happen here? Netflix has, after years of delay, finally opened for business in Australia. It is going to change habits here. In the United States, where it all started, it has stormed the family home. According to the latest report from TV ratings company Nielsen on US TV viewing trends, streaming video on demand, or […]

Could it happen here? Netflix has, after years of delay, finally opened for business in Australia. It is going to change habits here. In the United States, where it all started, it has stormed the family home. According to the latest report from TV ratings company Nielsen on US TV viewing trends, streaming video on demand, or SVOD, is rapidly becoming pervasive.

Nielsen found that over 40% of US homes had access to an SVOD service as of November last year, and 13% of homes boasted multiple streaming services. Since then the number of streaming services or internet-based cable TV imitators has risen — HBO is about to start one, and Dish’s SlingTV and Sony’s Vue are now operating or about to.

According to Nielsen, 36% of all households subscribe to Netflix, 13% to Amazon’s Prime and 6.5% to Hulu Plus. But Nielsen also reports that 24.5% of all homes don’t have broadband internet (but over 90% have cable). And here’s something else interesting about the Nielsen report — it has found a loose correlation between income and SVOD. Tthe report shows that those making US$100,000 or more make up 19% of TV households in the US, but 29% of SVOD subscribers. Those earning under $US40,000 a year account for 36% of TV households and 21% of SVOD access customers.

Nielsen’s report shows Americans are  still watching a lot of TV the old-fashioned way, with a twist. Americans spend nearly 40 hours a week watching TV live to air or on what the Yanks call time-shifted TV. That’s within three or seven days. In fact there’s a growing belief in the US (and the UK) that the overnight-plus-three-day ratings figures are more accurate, and that the overnight plus seven-day viewing figures are the rolled-gold data for the networks and their high ad charges. — Glenn Dyer

Capital change. From today, The Australian will no longer capitalise the first word of every article. Unless it’s the word “EXCLUSIVE”, of course. The change has been fully implemented across both the print edition and the website this morning.

Wait nearly over on ad-averaging bill. The long-awaited bill to allow SBS to average its ads will be introduced into Parliament on Wednesday or Thursday this week. Titled the “Communications Legislation Amendment (SBS advertising flexibility and other measures) Bill 2015“, it is expected to be referred straight to a Senate committee after the second reading, where it is expected to stay until just before the May budget. We reported two weeks ago that the bill was not expected to achieve enough crossbench support to pass. The bill’s passage is not a key priority for the government — Crikey has been told the main impetus for the bill is now coming from within SBS. —Myriam Robin

Crikey triumphs at Quills. While Crikey might not have won any actual Quills (see our report yesterday for all the goss, and in fairness we did not enter the awards), yesterday afternoon brought news one of our own had been awarded the most prestigious prize of all — the Melbourne Press Club gong for best tweet. Broede Carmody, who formally works for our sister site SmartCompany but whom we will claim as one of our own in such special circumstances, scored a night at the Crown for this tweet spoofing the Quills dress code:

Those of you who read our write-up yesterday will remember a certain Crikey journalist who was sat on by a News Corp scribe. We can now reveal that was in fact Carmody, who possesses both chair-like qualities and a sharp wit. Three cheers for Broede.

Making the whole thing all the sweeter, the runner-up was lord mayor Robert Doyle, who accused the Melbourne Press Club of snubbing him because he wasn’t a journalist. “Enjoy the Crown junket. Sincerely. Truly. I have moved on,” he tweeted to Carmody. — Myriam Robin

Front page of the day. The Daily Express did print another updated front page this morning. But we like the first version better (try to read the article) … 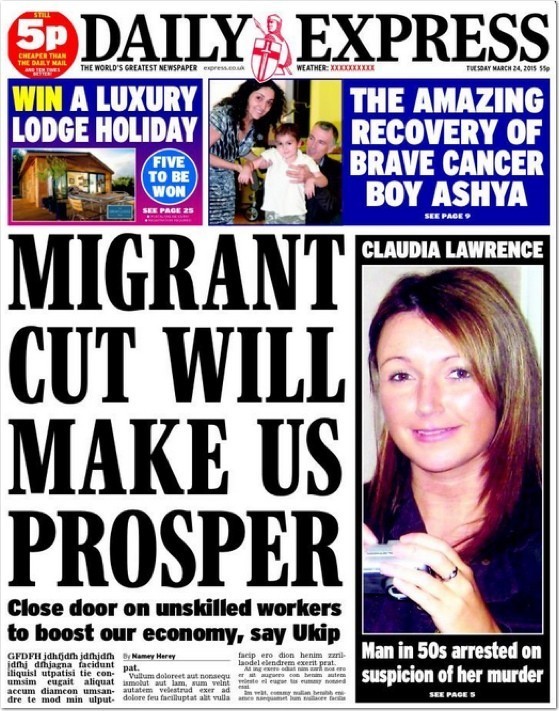 Should Netflix be forced to screen more Australian content?

And with the increase in prosperity, THe Daily Express will be able to afford an editor, sub-editor, and journalists.

“Neither is there anyone who loves, pursues or desires pain itself because it is pain”