The ABC's "shirt-fronting" satire might have been "in poor taste", as opined by the Communications Minister, but ACMA says it did not breach the code of conduct.

The Australian Communications and Media Authority has ruled the ABC did not breach any broadcasting rules through airing its controversial “shirt-front” segment last year, a satirical segment that was widely condemned for making light of serious events.

The segment, aired on November 11, 2014 as part of an attempt to draw younger viewers to 7.30, followed Abbott’s comments about “shirt-fronting” Vladimir Putin over Russia’s response to the MH17 disaster. New 7.30 reporter Kirsten Drysdale recounted all the opportunities Abbott had had to front up to the Russian leader during the G20, narrating their encounters, which were decidedly lacking in physical confrontation.

The skit caused outrage among conservative politicians and sections of the News Corp press.

Foreign Minister Julie Bishop said the segment made light of those killed on MH17. “The families of those killed on that plane are still grieving deeply … Their anguish, their heartbreak, is almost too much to bear. And if any of them had been watching that ABC program, I think they would’ve been devastated,” she said. “And to think that taxpayers’ funds went towards making it, I really think the ABC should have a long, hard think about what is appropriate in these circumstances when you’re talking about the deaths of so many Australians.” Her comments were echoed by Communications Minister Malcolm Turnbull, who said was in “poor taste”.

Censure also came from other quarters. Former Media Watch host Jonathan Holmes said the first problem with the skit was that “it wasn’t very funny”. “Laboured and overlong, in my view,” he wrote in the Fairfax metros, while adding that he didn’t believe it had demonstrated bias against the Coalition, as many News Corp columnists believed it did.

Complaints about the skit were made to the ABC, and then to ACMA, claiming the skit ridiculed the Prime Minister and did not meet the ABC’s requirements for fairness and impartiality. “I am sick of the ABC, and sadly also the 7.30 programme, of being irresponsible, disrespectful and negligent in the way they portray serious issues accurately,” a viewer wrote to the ABC’s internal complaints process. Unsatisfied with the ABC’s response, this complaint was than forwarded on to ACMA to rule on.

But ACMA ruled that “although 7.30 is generally a ‘news and information’ program for the purposes of the Code, the ACMA notes that the segment was comedic, light-hearted and highly satirical in tone.” 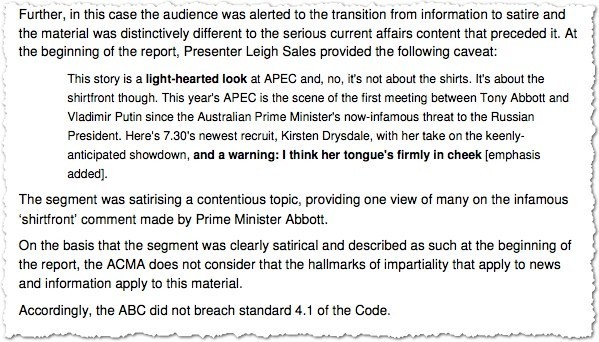 An extract from ACMA’s investigations report

The segment, ACMA wrote in its soon-to-be-released investigations report, was clearly labelled as satire. Host Leigh Sales warned viewers before throwing to the segment that Drysdale’s tongue was “firmly in cheek”. As such, ACMA ruled, the segment was satire, and not beholden to the same standard as the rest of 7.30.

If only we could appeal to Limited News over it’s abuse of it’s dominant market-share to push a conservative barrow of biased presentation (cultivating what it does) and get some degree of satisfaction, as easily – if only it had a better nature – and not get howled down and vilified for your trouble?

Could ACMA be asked to rule on whether “The Bolt Report” was also “satirical” in nature? It would explain a lot.

“Complaints about the skit were made to the ABC, and then to ACMA, claiming the skit ridiculed the Prime Minister” – yes I agree – the ABC shouldn’t ridicule the PM… he does enough of that himself!

Mikeb, Crikey is excited about finding an entity outside their Collective which gives a decision they like, so please don’t spoil their pleasure with reasonable suggestions such as that.

As much as it gives one pleasure to see Abbott satirised, the whole “shirt front” episode managed to entirely miss what is surely the central point. Abbott made his ill-judged comments as part of an instant Washington inspired demonisation of Mr Putin. The comment, and the propaganda that it was part of, was both stupid and dangerous. As events have transpired there is now overwhelming evidence that MH17 was shot down by a Ukrainian jet fighter.

That evidence is ignored by the msm and much of the so-called alternative media, including Crikey. The same complaint can be made about the reporting of the civil war going on there. Washington and its acolytes like Abbott would apparently rather risk a war than acknowledge even a modicum of the truth regarding both the shoot down and the conflict.