Who’s (sorta) who of Vic journalism turn out for Quills 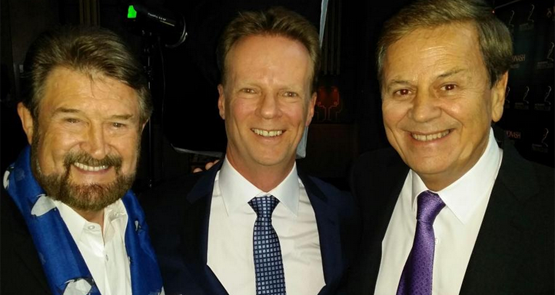 Smartly dressed, vaguely familiar figures sauntered up Crown’s magnificent staircase in Melbourne on Friday night. But there were no TV crews or crowds hoping for an autograph. It wasn’t the Logies or Brownlow awards, but the Quills — Victorian journalism’s much smaller, slightly more commercial version of the Walkleys.

Crikey sent two correspondents along, who were assigned a table with comrades and former colleagues like First Dog on the Moon and Meg Simons. We were only one table removed from the door — a fact remarked upon by Crikey founder Stephen Mayne, who noted his own fortunes had markedly improved from earlier years. Mayne is on Melbourne City Council these days, and after lord mayor Robert Doyle expressed a wish to attend, the Melbourne Press Club saw to it the council’s table was pride of place in the centre. For his own part, Doyle said he wanted see journalists making fools of themselves. He was disappointed — it was for the most part a well-behaved evening. The food was delightful and the drinks plentiful, with the only sour note being an overly long and barely funny comedy routine towards the end, a parody of a talkback caller inspired by Alan Jones’ “Barbara”. The staff did seem wary of the possibility of a Brendan Fevola incident, with only light, low-carb beer available once the official part of the evening was over.

Derryn Hinch got the lifetime achievement award and was ably introduced by longtime friend and competitor Ray Martin, who regaled the crowd with tales of how Hinchy had made his life hell when the two of them were American correspondents for Australian outlets in the late 1960s and early 1970s. Hinch, who wore a scraf with penguins on it (but not a penguin suit),  said he was truly touched by the tribute. He then spent some time obliquely skirting around contempt of court. We’re not game enough to repeat his comments here, but let’s say Hinch was up to his usual crusade.

The most moving speech of the night came from Channel Seven’s Chris Reason, who was award the $20,000 Graham Perkin Journalist of the Year Award for his coverage of the Sydney siege. It was, he noted up front, odd to be congratulated for what happened during such a terrible event. He vowed to donate a large chunk of his prize to the charities set up by the victims of the tragedy. December 15 last year was Reason’s first day back at work after long-service leave, and when news of a holdup at the Lindt cafe first filtered through, he snapped that the network should get the police reporter on it, he told the crowd. But Seven’s newsroom was soon evacuated. “Many assumed that because of Channel Seven’s proximity to the Lindt cafe it would have the best coverage,” Reason said. “That might be true for the opening minutes, but we quickly lost our advantage because they evacuated us. It’s actually extremely difficult to make television without a television station.” Seven cameraman Greg Parker tried to sneak into the newsroom with a security guard. When police caught them, he said he’d been adjusting the cameras, and showed police the quality of the vision he could get. Impressed, they let him stay. Eventually Seven talked police into allowing Reason to do a live cross from the newsroom. They reluctantly allowed him  back for the 6pm news. But afterwards, no one asked him to leave, and he wasn’t going to offer. So he stayed, and hour after hour filed updates on what was going on, right until the early hours, when police stormed the cafe. “Those words from the police sniper — ‘two hostages down’ — I’ll never forget,” Reason said. “For those of you who don’t know the Seven newsroom, it’s made entirely of glass. In the centre of the main glass way stands the Lindt cafe.” It remains, he said, in the background of every working day.

The Gold Quill went to Fairfax’s Adele Ferguson, who now has the Quill-Kennedy-Walkley trifecta for her expose, with Four Corners, of the financial planning scandal at the Commonwealth Bank. As she did when awarded her Gold Walkley, she again thanked the victims for coming forward, and the whistleblower, former CBA financial planner Jeff Morris, without whom the story wouldn’t have been written.

Fairfax investigative duo Richard Baker and Nick McKenzie also took home a swag of awards, but we feel that happens so often it’s barely worth remarking on these days. As host Brett McLeod put it as he handed the duo their gongs, “their trophy room is made out of trophies”.

Also taking out a swag of awards was the Sunday Herald Sun’s Ruth Lamperd for her five-month investigation into an asbestos factory cover-up. The Australian’s media section often writes of how Age editor Andrew Holden is on notice over falling circulation, but in the journalistic stakes he’d have been happy last Friday. The Age took out 14 of the 28 awards on offer, an impressive haul. It was a disappointing night for the ABC, which missed out on both radio categories and took home just three awards overall.

The lights came on at midnight, and the journalists were corralled to the after party. Your correspondents decided the line for Shane Warne’s Club 23 was far too long (and bore the indignity of being seen in Club 23) — a view shared by many others, who told revellers to “head to Lumia” as they came off the crowded lift. So to Lumia it was. While one Private Media journalist was mistaken for a chair by a News Corp scribe, the mood was jovial and in no way close to ending when your correspondents headed home.

Scumbag of the Year

Tips and rumours: ABC a no-show at Kennedys

And I’m paying a subscription for this — a breathless account of a provincial media knees up? Well, you’ve still got Guy Rundle and Bernard Keane I guess …

Hi Marcfranc. Media reporting, including of ‘provincial’ gatherings like those of the Melbourne Press Club, always been a pretty large part of Crikey. We do it because no one else does, and it provides a window to our readers about how the media works. Of course this particular piece is on the fluffier end of the scale, but I’m surprised you find it out of place.

Thanks for taking the time to respond to my comment Myriam.

As a young reporter in Melbourne I was as full of self-importance as my colleagues, but I don’t think any of us made the mistake of thinking an industry award night mattered to anyone outside it (apart from dates we were trying to impress) and the Age would never have reported on it.

But you know your market I guess …