The Higher Education sector hits back ... The Guardian remembers Malcolm ... the NSW election is almost here ...

A pox on both your houses. After the government’s higher education reforms were “fixed” in the Senate last week, Melbourne University vice-chancellor Glyn Davis has taken a swipe at both sides of politics in an email to staff at the sandstone university, saying that policy in the sector is “now at a stalemate”:

“Australian higher education policy is now at a stalemate. We do not have bi-partisan agreement, and so have lost a measure of certainty. This raises significant questions. Will the government insist on securing budget savings despite the defeat of the bill? Will promised funding for NCRIS be provided by raiding block grant funds for universities? And after an election next year, how will contenders deal with uncapped demand but no controls on cost?

As these questions are debated, more than one million students and 100,000 higher education professional and academic staff wonder what happens next.

Of course, there is much we do know.  So far neither major party has committed to increase public funding for universities.  In the absence of deregulated fees there is no obvious mechanism to address crowded classrooms or insecure employment.  Stalemate means the present inequitable system will remain.  Some students, such as those in arts, law and business will continue to pay over 80 per cent of the cost of their studies while others pay less than a third of the cost of their university education.

Without attention to research funding, we risk a growing reliance on cross-subsidy from teaching to support research.  The Senate defeat heartens those who oppose fees set in a market, but does not address the policy dilemmas still facing higher education.

This is a critical policy area for the sector and the nation, as together we face global competition in higher education.  The government has called for renewed public debate about policy options to tweak the defeated bill, noting ideas for price caps or tapered public subsidies.  It is not obvious a Senate opposed to deregulation as a concept will be pacified, so continued stalemate into 2016 seems a likely outcome.”

Not dead yet! While both men have had a somewhat tense relationship with the more conservative aspects of the Liberal Party in recent years, we do think it’s a tad to early for The Guardian to be eulogising Malcolm Turnbull. This headline was on The Guardian‘s homepage for an hour or so yesterday, but long enough for three separate tipsters to point the error out to us, and show that it sat right next to other pieces that correctly remembered Malcolm Fraser. 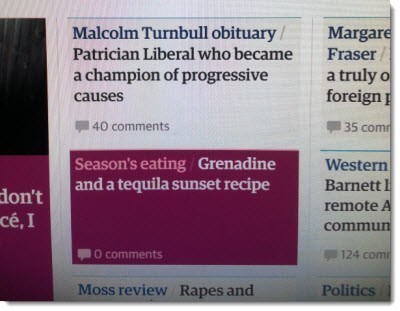 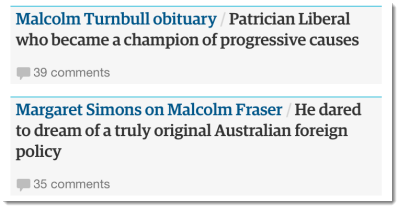 David or Adam? Meanwhile at The Sydney Morning Herald yesterday, another tipster noticed this fantastic bit of web production. While many of think that David Pocock is touched by god, it’s nice to see it depicted as such: 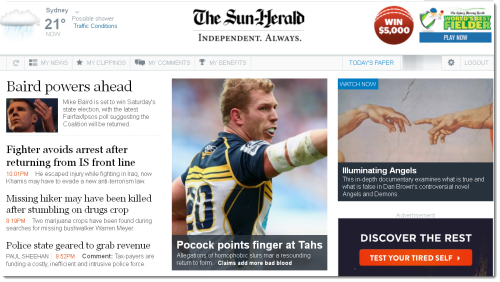 NSW election: it’s on. In an explosive speech leaked to The Age today, incoming (for the second time) president of the Victorian branch of the Liberals Michael Kroger told the party faithful that they were falling behind Labor and the Greens when it comes to campaigning. “We’ve got to turn the party into a campaigning organisation, otherwise we’re going to get killed again and again and again. Labor have gone way past us in campaigning, way past us.” Kroger said. Now we hear from a tipster in New South Wales that the Liberals on the other side of the Murray need to heed the message as well:

“The Liberals would not know that there was an election on next weekend in Mike Baird’s electorate of Manly. The posters have just gone up the front yards and shops and the doorknockers have been sent to marginal seats as far away as Blacktown — that’s a long way from Manly Corso and then across the Spit bridge.”

Have the campaigners been sent to the electorate of East Hills in south-west Sydney, which the Liberals only hold by 0.2%? We hear from a tipster that the Labor candidate has come under attack, with flyers and posters targeting him — without an authorisation message:

“An extremely nasty brochure about the Labor candidate for East Hills, Cameron Murphy, has been distributed very widely in the electorate. This seat is held by the Liberal Party with the smallest margin in New South Wales.  Contrary to the law, the brochure has no authorisation so those behind its vileness cannot be identified and so it could be from any Party, or none.”

Crikey understands that the flyers have been referred to the local returning officer.

Davis chooses to repeat Pyne’s misleading claim that the choice is between the status quo – however unsatisfactory one may believe it to be – and deregulating student fees. But there is an obvious option which the advocates of deregulation are steadfastly ignoring: increasing fee caps by whatever amount one can can get away with.