The Press Council does battle with the AFR... and other media tidbits of the day.

AFR v Press Council. The Australian Financial Review has criticised the Press Council, after the press watchdog found one of its headlines misleading despite the body of the story being accurate. 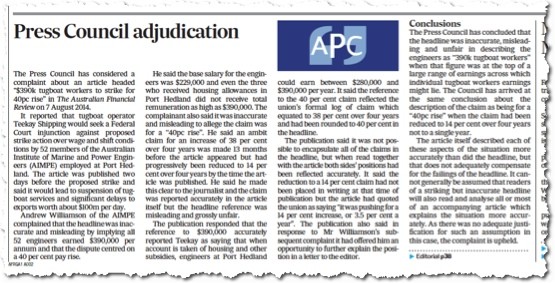 The adjudication, carried on page 2 of today’s AFR, says that while the article itself was accurate, a claim made in the headline was not:

“The Press Council has considered a complaint about an article headed “$390k tugboat workers to strike for 40pc rise” in The Australian Financial Review on 7 August 2014. It reported about proposed strike action over wage conditions by 52 members of the Australian Institute of Marine and Power Engineers (AIMPE). The article was published two days before the proposed strike.

“The Press Council has concluded that the headline was inaccurate, misleading and unfair in describing the engineers as “390k tugboat workers” when that figure was at the top of a large range of earnings across which individual tugboat workers earnings might lie. The Council has arrived at the same conclusion about the description of the claim as being for a “40pc rise” when negotiations were proceeding on the basis of a much lower figure.

But AFR editor Michael Stutchbury has strongly rebuked the Press Council, saying that looking at the issue at all set a “low bar” for the kind of complaints the council considers. He also said the Press Council only looked at one side of the story and did not test the information provided to the AFR with the source for the story, Teekay Shipping. The editorial states:

“In fact, the headline was based on Teekay-supplied information that the Press Council dismisses as inaccurate, misleading and unfair without testing it with Teekay. What the Press Council calls its ‘usual process’ is also poor practice for a journalist, let alone a media watchdog.”

“The Press Council says it can’t be assumed that readers of a “striking but inaccurate” headline would also analyse the accompanying accurate article. The Financial Review says that those who did read the headline but not the article would likely draw an accurate and fair conclusion: that a group of very highly paid unionised workers were threatening to use their market power to wring out even more just as a plummeting iron ore price was undercutting their company’s fortunes.”

The dispute is the first for new Press Council chair David Weisbrot, who has signalled a more collaborative, less adversarial approach to media regulation.

Australian Institute of Marine & Power Engineers senior national organiser Andrew Williamson described the AFR’s reaction as a “big dummy spit”. “We had the ability to articulate our complaints, which were about the headline, and the publication had a right of reply. — Myriam Robin

Science, schmience. Susan Greenfield is a British neuroscientist who had something of a run in the UK press for a while, arguing that new technologies were REWIRING CHILDREN’S BRAINS! She’s less quoted now, after The Guardian‘s Bad Science columnist, Ben Goldacre, noted that she had no peer-reviewed work to back up her claims, and her credentials as one of the new thrusting right-wing sociobiologists slipped after she became head of public science body the Royal Institution and pushed through a vastly expensive revamp of its headquarters and left it 3 million quid in the red and on the verge of bankruptcy.

But she still has a following in Australia. Planet Janet tends to quote her stuff because it appeals to dumb conservatives: the idea that everything was all right and natural and inevitable until technology came along that you didn’t grow up with, then then world went to hell. Ruth Ostrow has now jumped on the bandwagon in an article that makes Planet’s work look … cogent. Quoting Greenfield’s spurious notions that the form of technology causes brain rewiring — because she saw three gals take a selfie on a mountain top — Ostrow then argues that it’s the content of the new technology that does the damage. She doesn’t even understand the pseudo-science she’s using to back up her anecdotes.

The coup de grace on this thundering critique of narcissism is that Ostrow has spent decades making a living from writing self-absorbed, can’t-get-over-yourself drivel that was seen, by an earlier generation of newspeople, as the “new narcissism”. New technologies have changed culture for better and worse, but it’s just possible that Ostrow’s real complaint is that people no longer need experts to buff their self-image at a couple of grand a column. They require only an iPhone and a metal stick — Guy Rundle

Leaks and Ten. Don’t you just love the juxtaposition of stories about the embattled Ten network in the Fairfax media tabloids (SMH, Age and AFR) and The Australian this morning? The lead piece in the Oz‘s Media Diary reported:

“Network Ten directors have been asked to sign a statutory declaration swearing they have not leaked price-sensitive strategic information to the media. Ten chairman Hamish McLennan asked the directors to sign the affidavits late last year following a series of leaks from Ten that appeared in The Australian Financial Review. Despite the formal documents, the leaks have continued this year. Directors have been furious at the leaks, some of which could have damaged the sale negotiations with the Foxtel Discovery group.”

And then there’s the report in the Fairfax tabloid: “Discovery leaves Ten partnership”:

“American cable giant Discovery Communications has walked away from its offer to buy the main assets of Ten Network Holdings with Foxtel after rejecting the Ten board’s alternative offer that it take only a 15 per cent stake and a board seat at the embattled broadcaster.

“The news casts doubt over the future funding of Ten and over Foxtel’s efforts to be part of a consortium that has control of the third-placed commercial network, which is behind Masterchef Australia, The Project and I’m A Celebrity… Get Me Out of Here!

“While Ten’s ratings have shown signs of recovery analysts still believe the loss-making company will run out of money within two years if it does not receive a cash injection.”

Now, a couple of things. A statutory declaration and an affidavit are not the same thing.”An affidavit is a written statement confirmed by oath or affirmation, for use as evidence in court,” according to the federal Attorney-General’s website “A statutory declaration is a written statement that allows a person to declare something to be true.” There’s an important difference, they are not interchangeable terms — so McLennan did not make his directors sign affidavits, but stat decs.

But clearly so far as McLennan is concerned, there are good leaks (to The Australian) and bad leaks (to Fairfax). But now the Discovery partnership is no more (John Malone doesn’t waste his money on lost causes) and Foxtel is left at the altar, pondering if it should pump $80 million into Ten via a private placement of 14.9% of the network’s issued shares.

All Ten would say today was to repeat an earlier three-paragraph statement. — Glenn Dyer

Rivers of lead flowing at a scooped <em>AFR</em>

“The Council has arrived at the same conclusion about the description of the claim as being for a “40pc rise” when negotiations were proceeding on the basis of a much lower figure.”

Did the AFR not contact the union to hear their side? Seems like shoddy journalism if they didn’t, and if they did and knew it wasn’t 40pc then, yeah, it was a very misleading headline.

The selfie story reminds me of a joke recently published in the Onion.

News flash! man goes to concert and forgets to take his smart phone! Has to watch entire concert with his own eyes! “It was really vivid!” he said

Then there’s the Leunig cartoon of a man watching a gorgeous sunset on TV when it’s there to see out the window.