Vale Malcolm Fraser. Former prime minister Malcolm Fraser has died at the age of 84 after a short illness. As always, we all remember him differently, whether it’s the Dismissal or his policy of welcoming refugees from Vietnam. One tipster reminds us that Fraser introduced a ban on whaling around Australian coasts after being lobbied not just by conservation groups, but by his own daughter Phoebe. In a statement today Malcolm Turnbull described Fraser as “rather shy and often appeared somewhat aloof (not least because of his great height)”, and an experienced journo passes on this anecdote about trying to survive an interview with the former PM:

“Fraser was a terrifying figure. I was setting up for at interview at the ancestral home in Nareen, sitting and chatting in his study waiting for the camera guy to come in with gear. Fraser doesn’t do chat — it was excruciating.  The 15 longest minutes of my life, and the camera guy still hasn’t entered the room. I could see the camera guy in the entrance hall looking panicked and signalling me, he was holding an old brass door handle. I went out and he was a mess. One of Melbourne’s most experienced camera guys pissing himself and pleading that I don’t tell Fraser that he had broken his door. I was scared too. I told him to pull himself together, it will be fine, hide the handle and do the interview. We did it and then I fessed up to the handle hoping it would be responded to lightly with the noblesse oblige of Western District gentility. Anything but. No smile. No reassuring words. Just Fraser glaring at us, clutching his ancient door handle as we scuttled to the car.”

Another source tells us that his family’s life was completely changed by the decision to allow refugees from Vietnam to start new lives in Australia:

“Watching today’s news coverage on mainstream Australian media, many outlets are focusing on Mr Fraser’s role in the dismissal and his foreign policy positions. There has been little mention of his decision to open up Australia to Vietnamese refugees and his role in shaping Australian multiculturalism. My parents and family are Chinese-Vietnamese migrants who departed Vietnam after the Vietnam War. Mr Fraser’s decision to open Australia to new refugees allowed my parents and family a second chance to rebuild their lives. His passing has had a profound impact on me and my family.”

If you have any memories or stories of Malcolm Fraser, drop us a line or share them in the comments.

No access to disability conference. The National Disability Summit copped criticism before it began this year, after disability activists accused the organisers of excluding people with disabilities by limiting the number of concession tickets available. At the summit itself, which took place over the past two days in Melbourne, a panellist in a wheelchair was forced to be carried onto the stage because the venue had no ramp. According to our source, the panel was going to cover the experience of the NDIS trial site in Geelong, but one of the participants couldn’t access the stage. “I find it quite disgusting that she had to go through that,” our tipster says, noting that for a conference that was covering the complex needs of people with disabilities, it was hard to believe they could get something so basic wrong. The conference organisers explained that the hotel where the conference took place had lost the ramp, but that still highlights accessibility issues, our source says.

Bandt v Turnbull. While some of us may think that Facebook is the worst medium for political debate, no one has told Malcolm Turnbull. The Communications Minister decided yesterday afternoon, after gagging debate in the chamber, to continue his arguments with the Greens’ Adam Bandt in the comments of Bandt’s Facebook post. Perhaps these things might be more suited to Wickr — then the data of the argument wouldn’t have been retained. 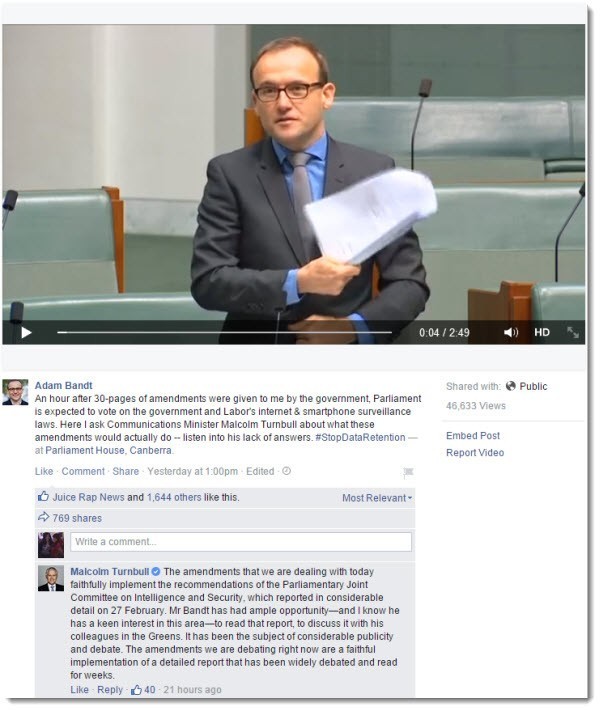 Dear Housewife. While some sections of the media are busy getting angry about a song titled Dear Future Husband, a tipster tells us that outdated gender norms are popping up everywhere:

“Celebrations for a friend’s 30th turned into howls of outrage when having the tour of her new kitchen. One of the party guests flicked open the manual for the new Westinghouse oven to be greeted with this hot little potato. Despite ordering one of the newer, fancier ovens from the range, it would appear their How To material has not kept pace with their hotplate technology. Ouch, that burns.” 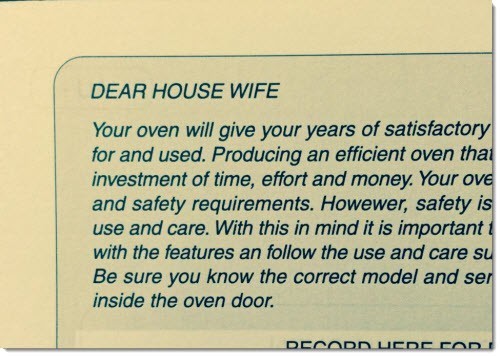 Red card for soccer at SBS. It’s been joked the S in SBS stands for soccer (or “football”, we know). But yesterday brought news the network could on sell some of its sporting rights to the commercial networks in a bid to raise some quick cash. It might not even air the next World Cup, a report in Fairfax’s metro papers said. SBS responded by releasing statement yesterday that said it was continuing to invest in the sport, and said it intended to bid competitively for the UEFA Champions League rights, coming up soon. But the statement, identical to an internal email sent from chief content officer Helen Kellie to staff, didn’t directly refute Fairfax’s main claim: that SBS was trying to make some quick cash through onselling the rights of some of its soccer games to the major commercial TV stations. One insider told us that’s because Fairfax’s story was “spot on”. Ms Tips has been told the claim has been tossed around for months within SBS’ sports division, even in front of journalists at staff sport meetings. It could provide a short-term cash boost to the cash-strapped network, and with the growth of the game might even provide a decent return on the initial investment in the rights a few years back.

Live sports is one of the main things the commercial networks can still monetise properly — it’s event television viewers don’t like to download or record for later, meaning its ratings have held up well over the years. But A-League on SBS has never been that popular — pulling in around 180,000 viewers for most games — and if the commercial networks can draw bigger crowds, it might make commercial sense for everyone to have them airing the games instead. But can SBS really walk away, even partially, from one of its greatest strengths? Insiders say it certainly could — current management, particularly Kellie, aren’t seen as huge champions of sports programming.

Unions don’t work. The NSW election is just eight days away, but the Liberals haven’t given up on raising funds for the last week of the campaign. A tipster received this email on Wednesday asking for contributions to the campaign to thwart all that union money going to the Labor campaign. Our source says: “Don’t you love that Union members aren’t ‘hard workers’ like Liberal voters?”

“Up to $20 million in union spending. That’s what we’re up against.

“Unlike Labor, our campaign is funded by hardworking people like you. The only way we can stop the union-driven Labor machine is for us all to chip in what we can to support the Baird Liberal Team.”

Safety all it’s quacked up to be? Duck hunting season opens in Victoria tomorrow, but activists are concerned at what it will mean for the threatened Brolga bird, which they say hasn’t been properly protected by the Labor government. Birdlife Australia is sayign that the areas set aside for Brolgas tomorrow are too dry for the birds and won’t keep them safe. “Rather than close Bullrush Swamp to shooting, the Minister has closed nearby Krause Swamp as a ‘refuge’ for Brolgas. Krause Swamp is dry and of no use to Brolgas,” says Dr Jenny Lau from Birdlife Australia. “It’s a ridiculous decision. It draws into question the quality of the advice the Minister has received from the new Game Management Authority. This is clearly a ‘fox in charge of the henhouse’ decision.” We hear from a tipster that the minister’s advisers come from the pro-shooting Game Management Authority (set up by former Nationals minister Peter Walsh), which was primarily responsible for allowing the Box Flat Massacre to occur in 2013. Will the government make a last-minute decision to change the swamps closed for shooting? It seems unlikely.

Is Malcolm Turnbull really saying that because you read Parliamentary Joint Committee report, that you are able to vote on the amended Parliamentary Bill without reading it?

Without reading and analysing the bill how can Bandt (or any other parliamentarian) know that it is indeed “a faithful implementation of the recommendations” in the report. Turnbull is after a representative of the party that prior to the last election diffused one of Labor’s policy strengths by telling voters that the Liberal Party was now on a Unity ticket with Labor on Education Policy, and we have all seen how the “faithful implementation” of that policy turned out.