‘This is a complete joke’: Labor’s SBS estimates gotcha fizzles

SBS chair Nihal Gupta gave nothing away at yesterday's Senate estimates, refusing to answer even the most basic of Labor's questions. 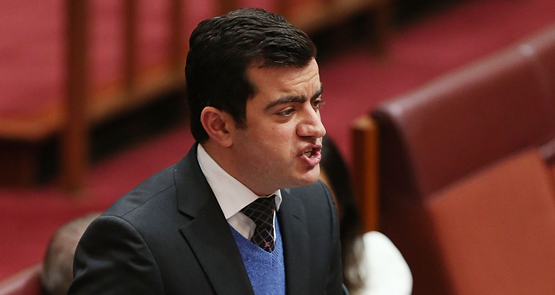 It took only 10 minutes for Senator Sam Dastyari’s frustration to show.

Meeting Nihal Gupta on the floor of a Senate estimates committee yesterday afternoon, he had hoped to force the SBS chairman to answer the allegations against him. But what he got was bupkis.

Gupta was described upon his appointment as the managing director of an electronics importer. It’s since emerged that this importer has no employees other than Gupta. A statement at the time of Gupta’s appointment described him as having “a strong background in business and commercial sector”. But the extent of his business experience has since been called into question. Various attempts have been made by the Labor opposition to determine whether Gupta misrepresented his qualifications to the selection committee at the time of his appointment — but within minutes yesterday, it was clear Gupta would be doing nothing to clarify the matter. “Since [my appointment], some questions were raised,” he said in his opening statement. “I do not propose to make any comment on the appointment.”

Dastyari then asked Gupta when he’d become aware there was a vacancy in the SBS chairmanship. But Gupta responded that he was appearing as the chairman of SBS, so it wasn’t appropriate for him to answer questions about things that preceeded his appointment.

“You’re kidding,” Dastyari said. “Questions I’ve been asking have been clear, specific, and are questions of fact, and he’s clearly made a decision he’s not going to answer questions. This is ridiculous. This is a complete joke.”

Attempts to force information out of Communications Department secretary Drew Clarke didn’t work, either. Clarke said the department’s guidance to applications said the details of applications would only be used for the purpose of the appointment process. “I’m not going to answer your specific question about the content of Mr Gupta’s application, and I wouldn’t answer that about any candidate,” Clarke said.

“I believe what’s at stake is the integrity of the selection process … Our concern is if the ins and outs was presented publicly, it would have a clear chilling effect on the willingness of Australian citizens to apply for these positions. By encouraging the privacy of this process, it encourages full disclosure and a strong field to come forward.”

Dastyari protested he was only trying to test the accuracy the information put out by the Communications Minister about the successful candidate. The argument didn’t sway Clarke, who insisted he was bound by applicant confidentiality.

For more than an hour Dastyari tried various avenues to force Gupta to confirm the shape of his resume. Eventually he gave up, wrapping things up early.

Even if the main allegations weren’t tested, several things were cleared up. For one, Gupta says he never wanted to sack SBS chairman Michael Ebeid. It was a surprising comment, which Gupta made unprompted in his opening statement. The claim that a special board meeting had been called to sack Ebeid was made in The Australian last month. At Senate estimates in late February, Ebeid confirmed the meeting had been called to just discuss his appointment. He also said he’d had a productive relationship with Gupta. But he didn’t directly comment on whether the chairman was seeking to sack him at the board meeting called with little notice earlier that month. Yesterday Gupta said several times that he had never wanted to sack Ebeid.

The second thing Dastyari managed to get out of Gupta was a statement that the chairman hadn’t asked current or former politicians to ensure he wasn’t called at estimates. Gupta said he’d expressed his views that his appearance wasn’t appropriate, but he didn’t ask anyone to see to it he didn’t appear. Crikey understands some NSW Labor figures have said privately they were contacted by Gupta in a bid to derail the estimates hearing — Dastyari was alluding to these rumours when he tried to get Gupta to admit as much on the record.

The next step for the Labor Party is to seek crossbench support for some kind of Senate inquiry into Gupta’s credentials and appointment. The Greens, who one would assume are natural allies to Labor on this particular issue, have not expressed a position on the chairman’s appointment. No Greens senators appeared at the special estimates hearing yesterday to ask Gupta questions. In the wake of the appearance, Labor communications spokesman and MP Jason Clare has called on Gupta to be sacked — the first time he’s explicitly done so. “Nihal Gupta was a Tony Abbott ‘Captain’s Call’ but it’s now Malcolm Turnbull’s call,” his statement reads.

For Gupta, the refusal to answer questions does nothing to dispel the view, growing even in Liberal ranks, that he was a bad appointment. It also raises serious questions about the selection panel who suggested him to the Prime Minister.

At one point, Dastyari asked Gupta whether he was concerned part of his ability to do his job required public confidence in his position. “There’ve been long-standing allegations in the public domain that you’re choosing not to answer,” Dastyari said.

Gupta responded that he didn’t want to comment on speculation. Labor will have to find another way.

How come, if you pulled this stunt (refusing to answer questions) in the ABCC you’d be put straight in gaol until you answered the questions, whereas you can damn well do as you please in front of a Senate committee hearing?

It is also a good indication that the mini Mr Bean Senator is all piss & wind in that he didn’t require the Committee treat Gupta as beig i cotempt of the Senate which is a offence similar to contempt of court.

AR, I think you are being a bit unfair to the senator, but requiring the Committee to treat Gupta as in contempt of the senate seems appropriate… no idea why he did not proceed in this way …