Tony Abbott follows a strict three-step process to cocking up -- and all three were in evidence yesterday with his Goebbels remark. 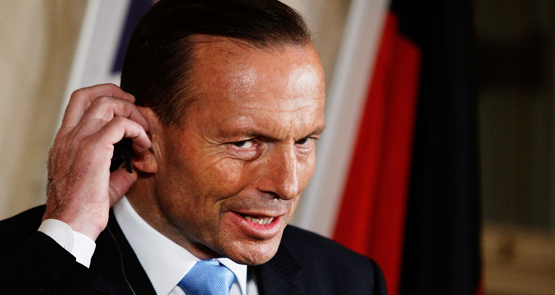 Goebbelsgate proves that the triple rule on predicting Tony Abbott’s next disaster is holding well. Readers will recall its terms. The PM’s next gaffe can be predicted by:

Constructing the Leader of the Opposition in a peacetime parliamentary democracy as the propaganda leader of a party of radical evil against which Britain stood alone fulfils all three of those excellently — as long as one recognises that the “appointment” was question time, an utterly routine event. This suggests that part 1 of the rule needs to be broadened — Tony Abbott’s next gaffe doesn’t come from his next official appointment, it comes from whatever Tony Abbott is doing next.

Doubtless his beleaguered crew will come up with endless examples of Godwining by the opposition, teh Leftz etc, but that’s not the point. Everyone, at some point, has called a parking officer a “Hitler”, but what’s said from the despatch box has a different meaning and import — and if it doesn’t then the Westminster system has no meaning. Abbott trashes the very traditions he is trying to base himself on by his thuggish talk.

The “Goebbels” remark is rich in irony, since it was Abbott’s mentor B.A. Santamaria who was 20th-century Australia’s major supporter of fascism — arguing vociferously for Franco in the ’30s, sympathetic to Mussolini. The pointy-eared Vatican Vulcan should have been interned in WWII, but we were a bit more relaxed about that than the Brits were. After the war, he applied the good doctor’s techniques to movement politics, including his 1945 blood ‘n’ soil-type proposal to forcibly reduce the size of Australia’s cities, and resettle millions as peasant farmers in rural cantons ruled over by bishops. A chicken in every Pol Pot.

Second irony: it’s Abbott’s man-crush, Winston Churchill, who came to grief against Labour with a Nazi slur. In the 1945 general election, influenced by Friedrich Hayek’s then-recently published Road to Serfdom, Churchill made a nationwide radio address, saying that Labour’s proposal for socialist democracy would entail the creation of a local “Gestapo”. After five years of unity shown by the British people in the face of the enemy, the remark showed many that Winston the Mad was back — and he duly lost the election by a larger landslide than had been predicted.

The Bad Abbott will go the same way. Stress makes him gaffe; gaffes make him more stressed. Using the triple rule — appointment/sycophancy-arrogance/Britishness — I confidently predict that, in August, the PM will visit a children’s hospital, meet a baby named Jacques, and punch it in the face.

Rundle: imploding Right in its Winter Palace turns against the people

Is there a good reference anywhere for Santamaria’s resettlement proposal?

This fixation of Abbott’s trying to tie Labor to nazis is weird, I thought that fascism is right wing like Abbott’s govt.

That’s a bit harsh, Guy. Surely Tony would be more likely to punch the pillow either side of the baby’s head? And then laugh his robot laugh.

So the rumour that he spends vast slabs of time isolated in his office reading Churchill’s works is bearing fruit. Very bitter fruit.