Meet the real estate interests behind the No Land Tax Party

The nascent No Land Tax Party is fielding candidates in every lower and upper house seat in the NSW election. Alex Mitchell and Sally Whyte ask: cui bono? In April 2014, Joe Tripodi, a former Fairfield MP, New South Wales Labor cabinet minister and influential factional warlord, was making one of his almost regular appearances as a witness at the Independent Commission Against Corruption.

This week, Pat (Pasquale) Carbone and Peter Jones were in the news linking them to the well-heeled No Land Tax Party, which is making a late dash for votes in the New South Wales election on March 28.

Jones, the party’s convener, is in the No. 1 spot on the party’s upper house ticket, and Carbone, brother of Fairfield mayor Frank Carbone, is No. 2.

(Nicholls has been in the news too. His May 2014 article “Treasurer for Sale” has been the subject of a bitterly contested defamation action in the Federal Court brought by Treasurer Joe Hockey).

The No Land Tax Party has been capturing media attention ever since winning the valued No. 1 spot on the ballot paper, the place that traditionally collects the “donkey vote”.

Land tax is not on this election’s agenda, and the current levels appear to enjoy bipartisan support. It’s not levied on places of residence but on residential and commercial investment property, and holiday homes.

The new party’s name has created a minor panic among home owners, who have deluged the Office of State Revenue with phone calls and emails asking if they are liable to pay the tax. They are not.

But the public response shows that the party has been cleverly named to attract a following among voters who fear the government is going to ambush them with more taxation. So the main question is what group in society wants to get rid of land tax by using a fear campaign? Cui bono, who benefits?

The chief lobbyists against land tax are real estate agents. Buyers are often put off purchasing a second (investment) property when they discover it involves paying an annual land tax, and the real estate industry believes its abolition will result in excess superannuation and other savings being poured into the real estate market.

One of the early donations to the party was $6000 from Ray White, the real estate giant whose franchises are located in cities and towns across the country. Another contributor was the Property Owners’ Association of NSW, which donated $5000 ($4250 monetary and $750 in kind).

The association’s first vice-president, James Ruben, and chairman of its land tax sub-committee is No. 4 on the No Land Tax Party’s upper house ticket. In the neighbouring seat of Vaucluse, Susanne Gervay, Ruben’s mother and a member of the association’s board of management, is standing.

Another relative, Nadia Ruben, is standing for the lower house seat of Bondi.

The party has candidates running in all 93 Legislative Assembly constituencies paying a nomination fee of $250 per candidate. That’s an initial expense of $23,250.

The cost of nominating 16 upper house candidates the party is a further $5000. The party has also printed leaflets, bumper stickers and T-shirts and spent money on advertising. It plans to pay $30 an hour to election day volunteers to work outside polling stations plus a $200 bonus if their candidate attracts 10% of the vote and becomes entitled to a refund of election expenses.

Earlier this week, Jones told 2GB’s Ray Hadley that he had only been involved with the party for 12 months, but he loaned $17,588.47 to the party in late 2013. Carbone also loaned the party thousands of dollars in 2013.

Party convener Peter Jones is a former vice-president of the postal and telecommunications branch of the NSW Communications Electrical Plumbing Union, and has also worked in the NSW ALP head office in Sussex Street. His most recent career foray occurred at the Brighton-Le-Sands Amateur Fishermen’s Association and ended in tears. In May last year, the NSW Office of Liquor, Gaming and Racing banned Jones, the club secretary, his colleague Pat Carbone and four others from being registered club directors for three years.

An official investigation reported that they were “not fit and proper persons” to hold club directorships and found Jones guilty of failure to perform his functions and duties to a proper standard.

The investigators reported that the directors had:

This week, Jim Metcher, secretary of the postal and telecommunications branch of the NSW CEPU, made an apprehended violence order complaint against Jones at a western Sydney police station after Metcher says he received a threatening text message.

The party also has a tangential connection to Eddie Obeid. Lawyer Raymond Stack, of Taree, donated $1000 to the campaign last year. Stack loaned Obeid millions of dollars in 2013, as the revelations about his dealings came to light.

Original donations to the party in 2013 came from Gordon Brown, the party’s candidate for the seat of Balmain.

Other candidates have connections to property development. Gus Macri, third on the Legislative Council ballot paper, owns Governor Group, which sells house-and-land packages, and Gary Adamson, fifth on the ticket, is a real estate agent. 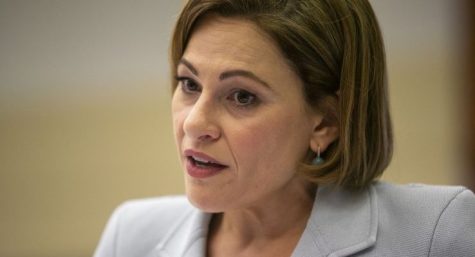 NSW politics…the best parties/politicians/policies money can buy. No wonder the voters are cynical of political parties and politicians!

Land tax is amongst the fairest and most efficient taxes around.

Consequently it will never be implemented in Australia.

Plenty of opportunity for scaremongering though.

Sad reflection on our fellow voters that a slogan/catchy name and prominent positioning on a ballot paper is all that’s required to win a place in parliment.

To be reasonable drsmithy (@2), excluding the residential home is helpful to many, not just the 1%

Thanks for the clarity Alex and Sally… we suspected as much, but good to have it articulated.