Stay tuned! Crikey is bringing back our media couples list. And there might be a saviour for online news.

An important announcement. Crikey’s famous media couples list is launching again soon. We’ve been gathering a bunch of new couples to add from our last attempt to catalogue the many entanglements of Australia’s press. But as always, we’ll be relying on you to help us make the list as comprehensive as possible. Stay tuned — and drop us a line if you have any suggestions. — Myriam Robin

Oh boy. A former staffer at news.com.au has come clean in a piece titled “All The Ways I wasted Rupert Murdoch’s money”. Published on Sneaky Mag, Will Colvin (son of the ABC’s Mark Colvin) writes that when he became disenchanted with the way the website was heading in 2011, he came up with creative ways of not doing his job, including anecdotes like this:

“As the staff changed and every decent journalist in the house slowly left and moved on to better and bigger things, the website shifted to a model best known as churnalism. Rather than making phone calls and interviewing people and finding out facts and writing articles about real things happening, I was moderating comments (there is no worse hell anywhere on the internet than the cesspit of the News.com.au comments section) and doing endless re-writes of other website’s content about totally sensationalist shit. I started to feel a sense of deep moral shame about the organisation I was contributing to.

“Jeff brought with him a new entertainment editor, we’ll call her Lisa Odenkirk. I really, really didn’t like Lisa Odenkirk. Especially after she mistook me – someone who had produced over 89 features and done three overseas press junkets – for an unpaid intern, after I sent her an article for subbing that I’d done with the guitarist of the Beach Boys and she replied with “Oh wow! You produced some content! Good on you! I’m not really a fan of the Beach Boys but I’m sure we can find somewhere to put it!”

“That was the day I decided my job at News.com.aucould change from ‘writing things, sub-editing things and doing website production’ to ‘doing absolutely no work at all and seeing how long I could get away with it.”

Update: Colvin says the article describes a period of just a month.

Buying a media startup can cost more than you thought. After finalising its takeover of yoof news website Elite Daily in January, DMG Media Group — publisher of the Daily Mail — seems to be on a mission to tie up any loose, potentially litigious ends by tracking down and (financially) placating artists exploited by Elite Daily’s former owners.

On January 9, 2015, a former Melbourne photographer now based in London, Thea Everett, discovered Elite Daily had misappropriated one of her photographs — which had been posted to Flickr under an “all rights reserved” licence — for use as the headline image in one of the site’s articles. The site did so without permission or attribution. Everett’s photo was also used to promote the article on Facebook.

Elite Daily edited the photo by flipping it 180 degrees and adding some speech bubbles, perhaps in an attempt to obviate copyright infringement or cast reasonable doubt on the source of the photograph 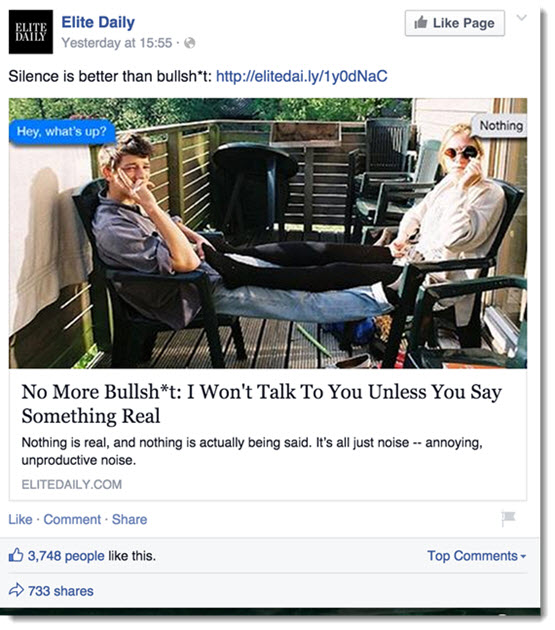 Everett emailed Elite Daily, requesting that it remove the photo. After receiving no response, she sent another strongly worded email along with an invoice for around 200 pounds — a figure based on the freelance rate Everett’s brother, an illustrator, charges Vice for artwork.

“I kept on at them so then they took it down but ignored my request for payment and were pretty crap and unprofessional,” Everett told Crikey. “Then [the Daily Mail takeover] happened and I just got an email two months later from the Daily Mail‘s finance woman in New York asking for [my] address so she can process the invoice.” A few days later, Everett was paid in full. — Dan Wood

Have you heard of Blendle? No?, Well it’s a Dutch micropayments company for newspapers that could very well save the dead tree industry’s fracturing paywall system. It’s only been going for just on two years, but already it has changed the way Dutch newspaper readers (there are 220,000 users in the Netherlands) pay for their online content. And last Friday The New York Times (a shareholder), News Corp’s Wall Street Journal, and Jeff Bezos’ Washington Post signed an agreement to use its technology.

Blendle allows readers to buy articles for as little as 20 to 50 US cents each — the price in Europe is 20 to 30 euro cents per purchase. But it also allows readers to get a refund if they didn’t like the report that had purchased. It operates through a loaded digital wallet. Besides the NYT, the German giant Axel Springer is a shareholder in Blendle. Blendle takes a 30% cut from each purchase and the publishers get the rest – like iTunes. It is an alternative to the metered paywall system which the Times and Journal now run — it allows for casual non subscribers to register and peruse and buy articles, which opens up the papers to greater online readership.

To get your money back, you have to tell Blendle why you didn’t like the story you purchased. Blendle claims refunds are running at just 5%. It also says purchases are heavily weighted towards news stories/analysis and not chat or gossip or regular news stories, such as police rounds items. In other words, clickbait stories don’t seem to have much of an impact on users.

The fact that the three most influential papers in the US have done a deal tells us that this is the coming thing for newspapers here and around the world. News Cirp will trial it on the Journal and if its happy, you will see it rapidly introduced around the world to its papers in the UK and Australia (and to the New York Post). The fact that the Washington Post signed up despite being owned by the tech-savvy Amazon founder tells us Blendle and its backers have a potential killer app for the industry. Blendle should suit papers like the Times, the Journal and the Post, which carry a lot of analysis and long form stories. Here in Australia, the Oz, the AFR, The Sydney Morning Herald and the Melbourne Age would seem ideal candidates for Blendle. — Glenn Dyer

Video of the day. Malcolm Fraser throws some serious shade at Tony Abbott … 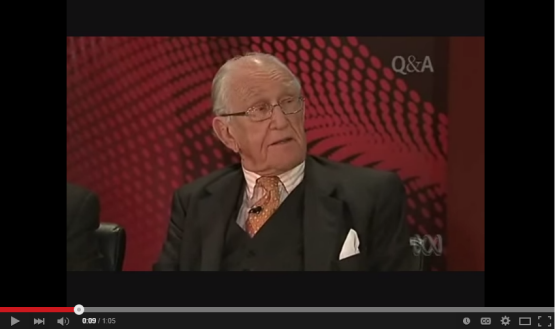 Front page of the day. A landslide victory … 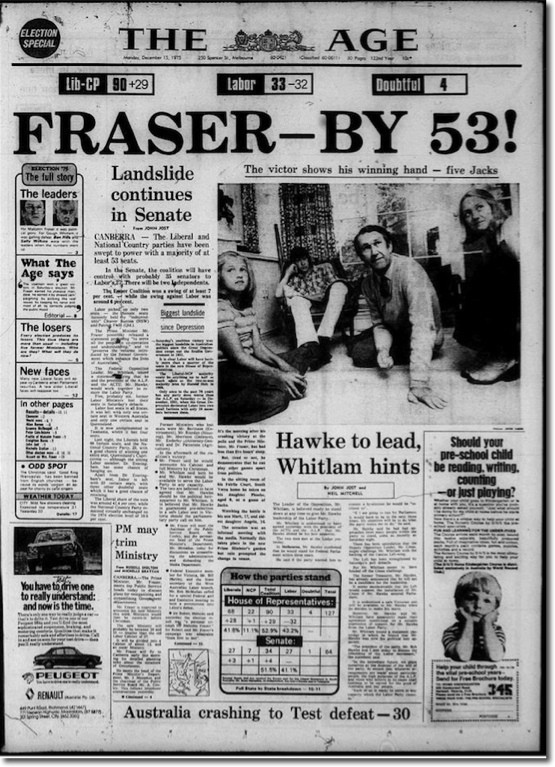 The Daily Mail faces court over unpaid photo use

Exploring the politics of motor sport with Tony Cochrane

Great news that newspapers have finally found a micro payments company to replace their clumsy firewalls. Why has it taken them so long?

Blendle sounds a bit like the smartphone/tablet only inkl.com it is Australian dammit.

USD10 deposit after a trial and USD0.1 per article.

Not seen any refund mechanism.