Assad’s mass surveillance scheme didn’t work, and neither will Abbott’s

Syria's attempt to spy on its citizens did nothing to stop terrorism, and neither will Australia's, writes Reem Sweid a Syrian-Australian social policy researcher. 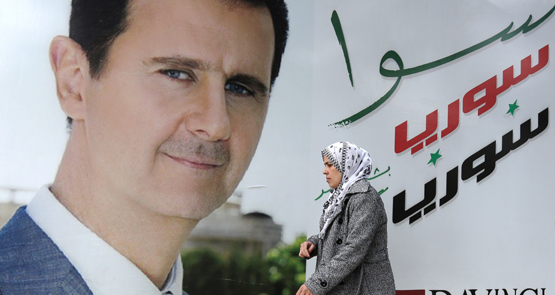 My grandmother turned to me with a panicked look and gestured at me to put the receiver down. I knew immediately I had done something wrong, but I had no idea what it was. I quickly obeyed, said goodbye to my friend and hung up. “What’s wrong, tete?” I asked. She replied: “Don’t you know it’s an offence to go to a religious class in Syria? They listen in on everyone’s phone — you have to be careful.”

At the time of this incident I was about 14 years old. I had visited Damascus to stay with my grandmother at least once in each of those 14 years. During those years I had picked up on the notion that the government routinely listened in on the phone calls of citizens — but I hadn’t known that it was illegal to run private religious gatherings. In fact, I had often accompanied my mother to women’s gatherings where we would listen to stories of the Prophet and discuss verses of the Koran.

Islam posed a threat to the regime’s power, not because the government feared the demand for an Islamic state, but because the principles of Islam call for democracy, rule of law and equality, and condemn authoritarianism, corruption and injustice. Neighbouring Turkey was an example of how a progressive interpretation of Islam encouraged democracy and human rights. For governments with no legitimacy, a liberal interpretation of the Koran could rally citizens to demand a vote. To counter this threat, the Assad government maintained an expansive mass surveillance program and propagated an inoffensive version of Islam that concerned itself with mundane topics, such as whether showing a bit of hair would land someone in the fiery pits of hell, or what prayer one should say to pass one’s exams. Imams were provided with key points of discussion for Friday sermons, and religious debates on television and radio were strictly regulated.

Just as the Assad agents in Damascus eavesdropped on my phone conversations, the Australian government now seeks to acquire the data on my calls, emails, messages and more. Australians debating the metadata retention laws in the name of national security could contemplate Syria’s experience with mass surveillance.

Assad’s surveillance sought to ensure that the interpretation of Islam matched its political agenda. It was ultimately futile, and one could argue it was precisely the action of mass surveillance and controlling the discourse of Islam that allowed extremism to go unchecked. Government mass surveillance stifled open dialogue, and interpretations of Islamic texts could no longer be debated, tested and debunked by learned scholars. Had it been legal for the depraved ideology of these extremists to be debated openly, rather than allowed to fester, Islamic State (also called ISIS, ISIL and Daesh) would have been nipped in the bud and a more progressive interpretation of Islam would exist today.

Intelligence gathering is a vital component without which the threat of terrorism could not be curtailed; however, the method of gathering information on potential threats should be considered carefully. Mass surveillance can result in hiding the very thing one is searching for. For example, I learned not to mention the religious classes over the phone, but I didn’t stop attending the classes. Similarly, those with violent intentions will learn how to avoid detection by not engaging electronically — and in doing so, become even more elusive to authorities. A targeted surveillance program based on information gathered through community engagement would be a more productive approach in apprehending potential threats.

A further challenge in approaching national security through metadata retention is that too much information can lead to limited resources being expended on superfluous activity. Rather than changing the law to collect and store enormous amounts of data on everybody, activities should be focused on collecting data on those acting suspiciously. Powers that allow the government to identify those who visit illegal websites, post extremists views, contact other known suspects are already available. Powers that allow the government to then track the data on these suspects are also already available. So how does storing metadata on all citizens really improve our national security? Perhaps the millions of dollars to be spent on metadata collection could be directed towards engaging with the Muslim community, thereby gaining more reliable information on potential threats, breaking down the division of “them” and “us”, and fostering an environment where Islamic principles can be debated openly and a progressive interpretation of Islam can flourish.

Ultimately, it comes down to the fact that the Australian government is considering breaching civil liberties, on a scale comparable to the actions of totalitarian regimes, in the name of national security. As a Syrian, I’ve experienced how these types of laws create a wedge between the government and its people while doing little to address the national threats; as an Australian, I am saddened by the irony of eroding privacy, liberty and freedom in defence of those very values.

*Reem Sweid is a social policy researcher and holds a from the M. Sc form the London School of Economics.

The jihadis of Daesh did not spring up like mushrooms in Syria but Saudi Arabia, which only has two exports, oil & wahhabism.

Before the state terrorist Western intervention (with Turkey, Gulf States and Saudi support) to back Sunni rebellion in Syria it was a very tolerant and peaceful place with only one ideological proscription: do not criticize the President (for a remarkable description see William Dalrymple’s “From the Holy Mountain”).

Of course under successive terror hysterical, pro-war, pro-Zionist, US lackey Lib-Lab (Coalition and Labor Right) governments it has become a criminal offence punishable by custodial sentences of up to life imprisonment to say certain things, read certain things or support certain causes (Gideon Polya, “50 Ways Australian Intelligence Spies On Australia And The World For UK , Israeli And US State Terrorism”, Countercurrents, 11 December, 2013: http://www.countercurrents.org/polya111213.htm ; Bill Rowlings, “I could go to jail for this next month”, Civil Liberties Australia”, 26 August 2014: http://www.cla.asn.au/News/i-could-go-to-jail-for-this-next-month/ ).

One notes that pre-war state surveillance via an intrusive, race- and religion-specifying identity card in France enabled the German Nazis with Vichy French complicity to round up and kill 65,000 out of 300,000 French Jews during WW2 (see “Jewish History Atlas” by the late Professor Sir Martin Gilbert, who must be criticized for flagrant holocaust minimizing; see Gideon Polya, “UK Zionist Historian Sir Martin Gilbert (1936-2015) Variously Ignored Or Minimized WW2 Bengali Holocaust”, Countercurrents, 19 February, 2015: http://www.countercurrents.org/polya190215.htm ).

The new Australian anti-terror laws (actually anti-Muslim and pro-Apartheid Israel laws) enable a detailed dossier on all Australians that goes vastly further than a race- and religion-specifying ID as in Nazi-occupied France in WW2 or indeed Zionist-occupied Palestine (Apartheid Israel) today and furthermore this detailed intelligence is shared with the US and Apartheid Israel (Philip Dorling, “ US share raw intelligence on Australia with Israel ”, Sydney Morning Herald, 12 September 2013: http://www.smh.com.au/national/us-shares-raw-intelligence-on-australians-with-israel-20130912-2tllm.html ).

Decent, pro-peace, pro-human rights, patriotic Australians will utterly reject the traitorous Lib-Labs (Coalition and Labor Right) who have utterly betrayed all Australians to the US and Apartheid Israel – they will accordingly vote 1 Green and put the Coalition last.