You, not your iPhone, are the gravest threat to your kid

Won't someone think of the children! Kids use smartphones because we let them. Perhaps try parenting, instead of buying another app to limit your kid's screen time. 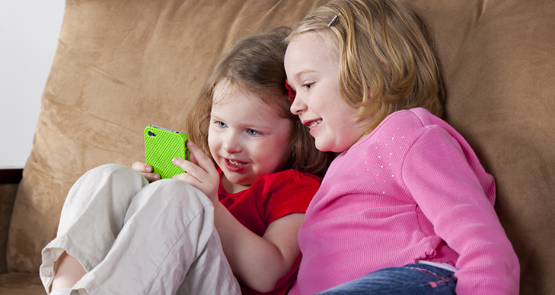 To introduce its Mobile Protect product, an app designed to monitor the screen time and potentially harmful 4G exchanges of children, Telstra commissioned an online survey whose results were copiously reported. The Sydney Morning Herald declared “Kids’ smartphone usage rampant”. “Kids as young as three using smartphones” wailed The Spectator. Even Chinese and Canadian publications took the tasty bait and reported on the dead eyes of Australia’s children lost to the glow of the iPhone.

The welfare of children, middle-class, destitute or otherwise, is, of course, an important matter and one with which news must engage. But this story, its promotional intent notwithstanding, is one we keep being told. And it is one, perhaps, that is more about us grown-ups than it is about the charges for whom we have ancient and legitimate, if sometimes misplaced, concerns.

In The Republic, Socrates tells Plato that children must be trained as “noble puppies” and kept away from unhelpful stories and dissuaded from writing things down for fear this would corrupt their ability to remember. What followed was more than 2000 years of concern for children’s exposure to new communications and technology, from printed material to the exchange of postcards to television to Facebook, which, apparently, accelerated bullying to a speed and force unprecedented. Poor houses were nothing on a cruel comment appended to a status update.

Our historic concerns for children, played out masterfully by Telstra PR this week, are formed by the tensions we imagine to exist between the naturally pure kid, who we should just let be a kid, and the corrupt world she must learn to negotiate. Perhaps what we are really concerned about here is the tension we feel between ourselves and civilisation.

Needless to say, too much internet is a terrible idea and if your child is racking up four figures on in-app freemium purchases or sexting with the cat, something needs to be done. Perhaps one might try taking the smartphone from one’s child or disabling all but its GPS tracking, call and text functions. It’s not pleasant to deny children what they crave, but it is not impossible. I was a real shit of a child whose passion for television was matchless. Nonetheless, my parents forbade it for more than an hour a day and restricted this to age-appropriate viewing and although, yes, my cultural capital plummeted at lunch time when I was unable to discuss with the other girls how Vinegar Tits on Prisoner was a total lez, I survived into adulthood with only occasional therapy.

The obvious and appealing safety mechanisms of a smartphone aside, its full-featured mode is not a necessary companion to today’s child any more than full access to the dreadful programs of Grundy were to me. The idea that media devices are beyond our control when placed in the hands of our children is (a) plain technologically untrue — google it, grandpa; and (b) a constructed anxiety that is more about us than them.

We look at the child and we have the terrible habit of seeing ourselves instead of them reflected back. When we imagine the conflict between the pure self and the cruel world, it is one with which we are engaged, and which children, mercifully and for the most part, are yet to acknowledge. If you disable some of the fun stuff on a kid’s phone, they’ll just have the shits. Whereas we might be genuinely anxious. They might suffer a little isolation at school for turning fewer rainbow ostriches, or whatever they are, into gold dust, but it’s nothing like the discontent we feel when we fail to engage as we believe our contemporaries do.

Children can be quickly “corrupted” by exposure to silly things, but they also quickly forget the damage wrought and move on to nag for another thing another day. We, by contrast, are beset by long-term longing for the adult versions of success in communication and technological prestige. Just because we feel we can’t live without such-and-such a thing and will likely continue feeling that way long into our futures, there’s no reason to suspect that children are yet so filled with this anxious aspiration.

It’s not smartphones that pose the biggest danger to children. It’s adults and especially those who believe quite earnestly that a child’s consumer longing is as irremediable as our own. If we really want to “let kids be kids”, as has been the urgent cry this week in anti-tech press, we must liberate them from our assumption that they want things as badly as we do.

The ones who have done the boring work find a host of concerns Helen. It is not the content, it is the way that the phone removes the attention of the parents or becomes an electronic “dummy”. As an educator of many years experience, I would say chuck the thing to buggery till the kids are at least three, learn that instagram, Facebook, Twitter etc are of no real consequence, whereas the neurological development of your child is. The evidence is overwhelming. Phones replace talk, touch and listen and the deficit can never be truly made up.

old greybeard, the phone does not remove the attention of parents. The parents remove their attention. As they have managed to do in the past.

Smart phones (ditto computers, tv etc) show up dull parents. Given that most pre-teen kids ache for time with any half-decent parent, if you can’t compete, you need to lift your game. Parents can and should set limits, but thats only a supply-side stopgap, need to service demand in alternative ways or expect to be subverted.

OTOH, setting limits on kids screen time while parents are unable to limit their own use teaches invaluable lessons on addiction, hypocrisy and power, stuff everyone should know. Depends what you want to teach i suppose, love of meatspace life or realpolitik.

Oh my! Sacrilege! Vinegar Tits was’t a total Lez. She had awful taste in men! T’was The Freak that was the total Lez – black leather gloves and all!