Who is Gloria and why did she take out a full page ad in The Oz? And other tips of the day ...

Happy birthday, Gloria. Readers of The Australian were left scratching their heads this morning over this advertisement, which took up the whole of page 5: 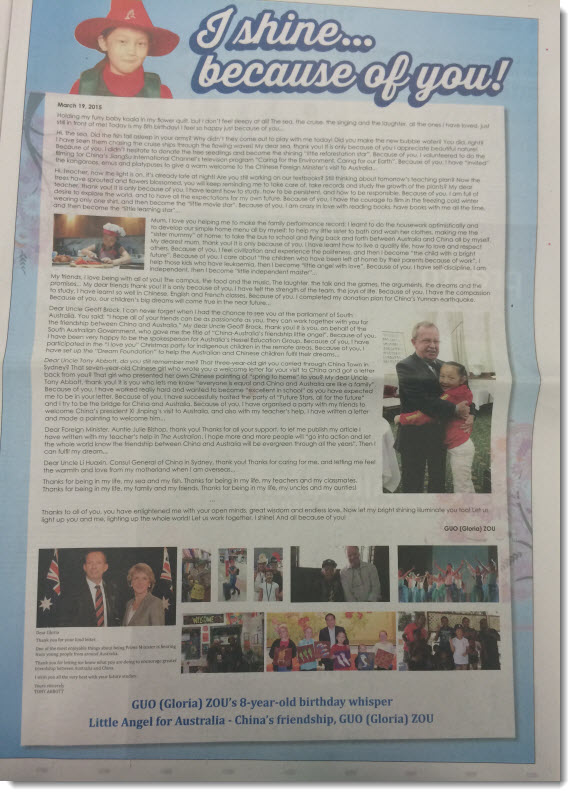 The advertisement is a letter titled “I Shine … because of you”, from Gloria Zou, an eight-year-old Chinese girl who lives in Australia, and it describes her life as well as thanking political figures such as Prime Minister Tony Abbott, “uncle Tony Abbott,” and Foreign Minister Julie Bishop, “Auntie Julie Bishop”. As the letter states, today is Gloria’s eighth birthday, and it ends with a wish to “let us light up you and me, lighting up the whole world”. So what’s going on? Is this a new avenue of diplomacy from China to Australia? Have children’s birthdays moved on from pool parties and pin the tail on the donkey? We understand that this isn’t the first time Gloria’s family has run an advertisement in the Oz, but it’s definitely unusual. For those who are wondering, Gloria (Guo) Zou is a musical performer living in Sydney’s northern suburbs, and she has previously made headlines for donating her earnings as an entertainer to the Starlight Foundation. Her mother is Sally Zou, a businesswoman with the Ausmetals Mining Group. We tried to contact the Zou family this morning to ask about the advertisement, but didn’t hear back by deadline.

Lomborg at DFAT. We hear from a tipster at the Department of Foreign Affairs and Trade that controversial figure  Dr Bjorn Lomborg will be addressing staff today:

“DFAT staff have previously appreciated that their boss, Julie Bishop, appears to be a moderate on climate change. They’re concerned that climate skeptic Dr Bjorn Lomborg (a favourite of The Australian) will lecture DFAT staff today. Says one, ‘to invite such biased crap inside the bureaucracy is pretty unprecedented’.”

Crikey understands that Lomborg wont be speaking about climate change, but the UN’s post-2015 development agenda, and that attendance is optional. Lomborg has previously argued that climate change is happening, but it’s not as bad as we think and argued that it would cost the world economy more to fight climate change than to just let it happen. We wonder what the DFAT mandarins will make of his views.

Menzies doco — not forgotten. The ABC announced today that it has commissioned former prime minister John Howard to present a two-part documentary series on Robert Menzies, and he’s the right man for the job, considering he’s written the 707-page book The Menzies Era, published last year. But a tipster has pointed us toward the producers of the series, one of whom is Simon Nasht of Smith and Nasht productions. Nasht was a producer on anti-CSG film The Frackman, which has been attracting the ire of some in Liberal circles, especially as it received funding from Screen Australia. The Menzies doco is also produced in association with Screen Australia — we wonder if its selection process will be getting as much heat as that of The Frackman.

Revealing neckline. It’s one of those things that should remain a joke between teenage boys, but it has seemed to go too far with the help of people on the internet with nothing better to talk about. A few weeks ago Channel Ten presenter Natarsha Belling wore a jacket with a collar that some people likened to a penis. It has led to articles that list the amount of times jackets with that collar have been worn by newsreaders, and Today presenter Lisa Wilkinson said yesterday that all TV presenters should wear them today — but she didn’t: 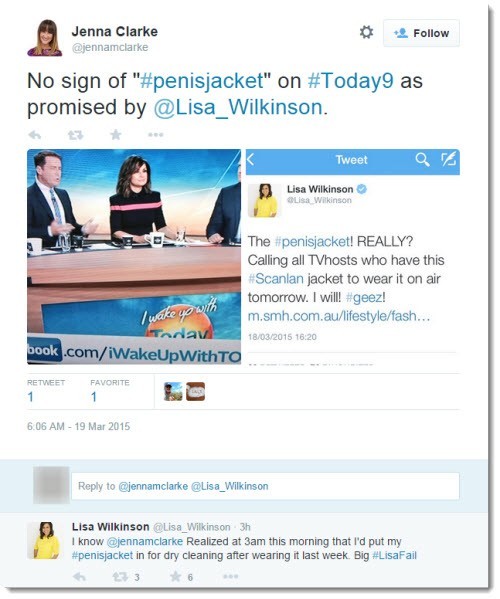 One TV presenter who seems to have paid attention to Wilkinson’s message and shown solidarity over the “penis jacket” issue is the ABC’s Virginia Trioli, who wore this on News Breakfast this morning: 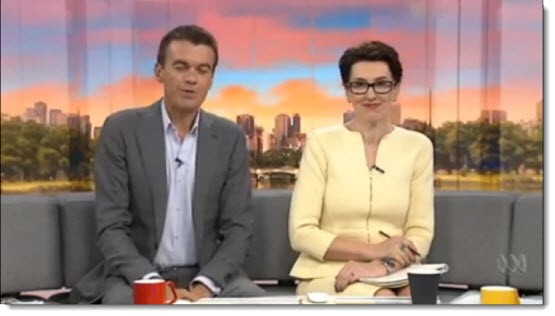 How Obama eats. While Prime Minister Tony Abbott is running around biting into raw onions as he pleases, spare a thought for US President Barack Obama, who would never be at liberty to do such a thing. We hear from a tipster who was privy to the catering details of a recent Democratic fundraising dinner, that the President never gets to actually eat at such occasions. The President is required to eat beforehand, and the meal that is sat before him (chosen at random from meals that have been tested by his security) is not touched. Now that’s enough to make you tear up, if the onions hadn’t already done it.

Marching not quite so simple. Yesterday we ran a tip that soldiers who had been injured while serving in Afghanistan wouldn’t be able to march in Saturday’s Welcome Home marches for members of Operation Slipper. We have heard back from the Department of Defence, who tell us:

“Defence has offered, and will provide support to any Operation Slipper veteran participating in the Commemorative Activities. Veterans who require assistance will be offered transport or seating in the VIP area for the march and ceremony.”

We had also been told there were issues with the distribution of correct dress uniforms for the march, and a spokesperson told us:

“Each location has determined the appropriate uniform for their event, taking into account local environmental considerations. Defence has not received any complaints about the uniform requirements for the commemoration activity. ADF members who have concerns should direct their questions to the Activity Coordinator in their location.”

Walking the walk. Parliamentary fashion can sometimes feel a bit dull — all drab suits and blue ties — so we commend Labor MP Lisa Chesters for her fashion choices while making a trip to Aussies cafe this morning. We’re also glad to see her Chucks are red — gotta stay in team colours. 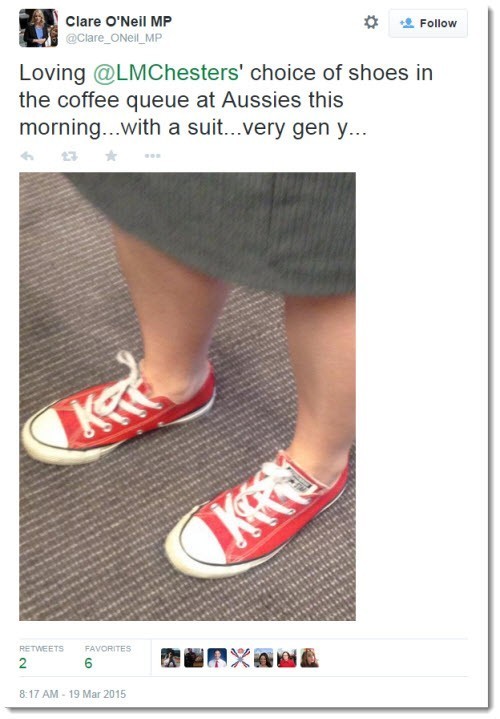 The only thing that Lomborg is qualified to speak on, is how to make cash from being a self promoting charlatan. Call me naive, but I can’t see how that would be relevant to DFAT.

Ah, the perks of being a public servant, getting to watch departments waning budget being squandered on the pet crackpots of governing party.