Rundle: what we can do now to save Chan and Sukumaran

Andrew Chan and Myuran Sukumaran could be granted a few more months before their executions. Those who want to campaign for them should not let this time go to waste. 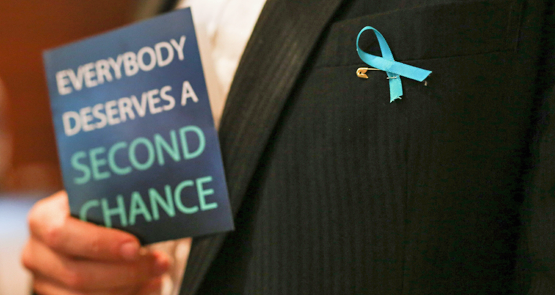 News that a death-row prisoner sentenced to be executed in Indonesia has won a right to an appeal has raised hopes that Andrew Chan and Myuran Sukumaran could have their execution date set back by months.

Mary Veloso was scheduled to be executed with the Australian pair, but she has now won a review of her case. Her story is even more pitiful than that of the Australian duo.

A single mother in her 20s from a poor, non-literate background, she was arrested with suitcases containing a couple of kilos of heroin. She denies knowing it was in there, which is more than possible. She speaks only Tagalog, making defence, etc, all the more difficult.

Should an execution date be put back for all three, it will allow time for Chan and Sukumaran to challenge the legal details of the case. But it also presents the grave danger that they will once again slip from public view in Australia.

One can already feel a slackening-off of interest. That’s inevitable. The sudden flurry of attention when their execution loomed close was fuelled by a sudden realisation as to what was about to happen, and a revulsion at it, moral, emotional and physical.

The revulsion fuelled the politics and protest, and there’s nothing wrong with that. But it’s not a long-term proposition, or even a medium-term one. With the pair entering a legal limbo, many people who genuinely care about this issue will attach to something else.

That’s all the more so with a death penalty cause. The wilful extinction of a human being is so awful — especially when it is conducted in this slow and ritualised processional — that few people can stare at it for too long. Having rejected the cathartic role of the act, its terror and horror flow back into us.

Indeed, in any campaign of this sort, this is a counter-current within us, a desire for it to be done, to get to the mourning part, the candles and the tears. The odds of success are long in any case, and the anticipation of failure so great, so wrenching in advance, that it sends you recoiling from it. There has already been pressure in the Liberal party room to drop the issue, from Luke Simpkins, the sharia obsessive returning to form.

Yet now more than ever there’s a need for a continuity to be maintained, for some number of people who signed petitions and tweeted the hashtag, etc, to get themselves involved and stay involved in the months ahead. What they do is another question.

One increasingly clear point is that such a campaign can no longer be a repeated petitioning of one’s own government. This is increasingly disempowering, and it also ties the country to the government. As the recent inept performance of the latter has shown, that approach can take you backwards.

A campaign to prevent two executions can’t be taken as a site for social protest experiment, but, at some point, new tactics and approaches have to be tried. God knows as much as one finds Tony Abbott a loathsome man, I can’t believe that he would screw up the campaign deliberately, tying aid to the executions.

Same goes for Julie Bishop, and strategies such as offering to pay for subsequent incarceration are all jumbled up with other approaches. This appears to have drowned out an offer of aid that was made — but not in the manner that would have made it a fully symbolic act of reparation.

Such an offer can only work if it is done in that way — if supporters of the cause can establish, for Indonesia, or Indonesians, that Australia stands for Chan and Sukumaran, a synecdoche of whole for part. In that sense, we offer ourselves up as apologising on their behalf, taking responsibility for them, and petitioning the Indonesian people for mercy.

Hence your correspondent’s suggestion earlier that the government offer a one-off aid project of some value as reparation for the pair’s damage to Indonesia, their cynical flouting of its laws, and exploitation of its current character, as a bit wild and woolly.

That didn’t happen — indeed, the disastrous opposite of it happened — but some sort of act could still be made of that character by civil groups, speaking directly to the Indonesian people.

The most obvious way of doing that, as a starting point, would be a half- or full-page ad in the two leading Indonesian newspapers, Kompas and Republika, speaking directly from some group to the Indonesian people as a whole.

That involves setting out an apology for Chan and Sukumaran’s actions, acknowledgement of the seriousness of their crime, apology for the conduct of our government, asking that that not be held against the condemned pair, and simply asking for mercy.

Simple and direct appeal, no clever-clever bollocks, no overemphasis on the pair’s beautiful souls or their full lives ahead of ’em, waste of life, etc. If Jakartans want to see waste of life, they only have to look out their bus window — none of that really strikes.

It is taking responsibility for the pair, and addressing the collective nature of their crime, and granting of mercy for it that would be the key. And, as per usual now, god knows whether it would work, or whether the papers in question would even take such an ad.

But it’s also something that reaches beyond the government-to-government process of these sort of negotiations and tries to push things to the next stage — one in which tackling the death penalty becomes an encounter between civil societies, not states. Whether they’re willing to admit it or not, people want a death-penalty campaign to offer something more than the saving of the lives involved, and this is it — that this is the point where such campaigns move beyond petitioning, to an attempt at dialogue.

Given that spirit, some people simply need to get on a plane and take the campaign there — not in anger, or self-righteousness, or blaming a people for its government’s actions (the wrong sort of synecdoche), but in such a way that the months of limbo that Chan and Sukumaran have now been granted/condemned to should not be in vain, and may even yield an enormous shock.

On a side note, with respect to Abbott — “I can’t believe that [Abbott] would screw up the campaign deliberately”. As terrible as the thought is, I feel it’s the most likely scenario. Even before he brought the aid money into it — leading to furore in Indonesia — he warned of “consequences” if Indonesia went ahead (in line with their sovereign criminal justice system).

Abbott knows acting tough appeals to his core supporters, many of whom are quite comfortable with, if not gunning for, the death penalty for these two. He might see the veiled threats as a win-win move for him. He gets to look tough for the base and wrap it in a supposed plea for these two which is actually counterproductive, and perhaps sealed their fate.

People insist on not underestimating how smart Abbott is. He must have cluey advisers. Notwithstanding other mistakes he has made, I just don’t see how he could be that stupid to not be aware of the consequences of his comments. Surely?

Thanks Guy. On the ground in Indonesia, in my experience, the death penalty is a vexed issue, a bit like the ISIS issue and many others where what people feel a moral tension, all set in the context of a deeply held anxiety about stability and certainty, and attendant views of authority. The conversation as to whether the State should be entrusted with life and death decisions is alive, and your suggestion of Australians respectfully participating in that conversation is a good one, IMHO.

Well I think the opposite.

We now have an opportunity for government to government discussion without it being plastered all over the front page of the Age so that the twitterati can mock Tony Abbott yet again and Chan and Sukumaran become collateral damage in the war against Tony Abbott.

As sure as the sun will come up tomorrow, it doesn’t really matter what Abbott says on their behalf, his enemies in Australia will take him apart.

It is important that Joko Widodo not lose face and the best way to make him lose face is to run a media campaign against him in the two leading Indonesian newspapers, Kompas and Republika. He would shoot them just to show he is not swayed by a media campaign as commuting the sentences would make him look weak. A better scenario is a series of appeals during which Widodo announces that he has been thinking about the death penalty and has decided no one else will be executed till after the law has been reviewed.

Chan and Sukumaran’s best chance is for the politics to end and that means you as well Guy.

What opportunity is that David? Abbott has made himself ridiculous with ordinary Indonesians who mockingly throw their coins in the Hotel Indonesia Roundabout fountain! Minister Tedjo warns of a tsunami of refugees – why? Because of Abbott’s intemperate attitude on regional efforts on refugees. From trade to aid to human rights Abbott has only himself to blame for his blundering.

On the other hand, Guy suggests an apology, not grandstanding. Not the disrespect shown by Abbott to SBY after the phone bugging, but the apology political anticipated after that episode. Abbott couldn’t do it then, but the Australian people could show they are bigger than that. I think Jokowi would get that, particularly if it expressed solidarity with him on the 200+ Indonesian’s facing death row in other countries. Those things give Jokowi room to move.

Guy suggests negotiation, say,this apology you want, be in Indonesia’s two largest newspapers. That’s what I disagree with.