The Australian Women's Weekly's Helen McCabe on why she put Margie Abbott's weight-loss on the front cover. And other media tidbits of the day.

On that cover. An exclusive interview — her first ever — where readers found out what makes the extremely private Margie Abbott tick. The Australian Women’s Weekly’s editor-in-chief Helen McCabe has been aiming for an interview with the prime minister’s wife since before the 2010 election. But when the magazine finally scored the interview, that did it put on the front? On the shoulder of cover-girl Rosie Batty sits a small photo with the words: “How Margie lost 20 kilos”. The reference is to a  break-out box that says 18 months ago, Abbott was warned she was at risk of developing type 2 diabetes, so she took up cycling two to three times a week. The reveal takes up less than a quarter of a page in the AWW’s 10-page feature on the Prime Minister’s wife. 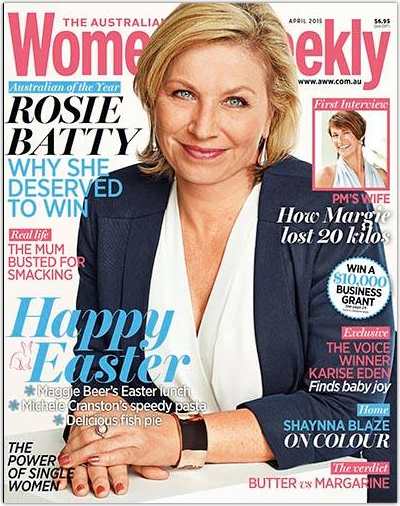 The front-page presentation drew censure. For example, broadcaster and writer Tracey Spicer slammed the cover on The Hoopla, asking why women were still being reduced to their body parts instead of their lives.

Spicer suggested three alternative headings the AWW could have used, including

McCabe comes from a news-breaking background (she’s a former Sunday Telegraph deputy editor), and presumably knows a good angle when she sees one. So why did she choose to emphasise weight loss over any of the above? Crikey put the question to her yesterday, and was told the following: “I accept the criticism, but my main objective is to find something that is interesting to the majority of our readers,” she said. “And while politics is interesting to me, experience tells me that it would not interest the majority of readers.

“And to be fair, it is an area of interest for Mrs Abbott, who has quite a serious message to women of all ages.” — Myriam Robin

Is SBS still the home of football? SBS has long proclaimed itself the home of soccer (or “football”, as fans of the sport have it). In fact, it was a point repeatedly raised by managing director Michael Ebeid last year as he railed against the ABC’s successful bid for the Asian Cup (Ebeid argued the ABC shouldn’t have bid up the price of the tournament, which would have been better aired on SBS).

This makes the scoop in today’s Fairfax papers all the more shocking. Football reporter Sebastian Hassett reports that SBS is in “advanced plans to cut ties with the sport as part of a dramatic programming overhaul”. SBS is reportedly in discussions with other free-to-air broadcasters about off-loading its A-league commitments for the next two seasons. SBS and Fox Sports have signed a four-year agreement to share the rights until 2017. According to the report, SBS might not even air the next World Cup, despite broadcasting the event since 1990. “The rights are a highly prized asset and SBS could make a huge sum of money by on-selling the broadcast agreement for the 2018 World Cup in Russia and the 2022 World Cup in Qatar,” Fairfax’s report states.

Asked about the allegations this morning, an SBS spokesperson said SBS continued to invest its “modest resources” into the game, “which unites our diverse communities”, adding that the broadcaster intended to bid for the Champions League.

“Our current contracts are for the exclusive rights to the World Cup until 2022, the Friday night A-League games until 2016-17. The rights for the Champions League are up for renewal this year and it is our intention to bid competitively for those rights.” — Myriam Robin

Right-wing hysteria watch. Jesus teh Rightz — they’re like an emo who discovered Sylvia Plath and Stone’s Green Ginger Wine on the same night. One Ipsos poll and we’re all being lectured about how Tony has his finger on the pulse, political class blah blah. The next, the government loses the higher education vote — the vote it was always going to lose again — again, and they’re writing a (political) suicide note in their own blood.

It is of course, not the government’s fault despite the fact that they didn’t have the guts to go to the people with the policy in 2013. According to Chris Kenny, it’s the fault of “whatever-ocracy”, which is apparently how the crossbenchers who don’t agree with him vote. According to Eeyore Kelly, it’s the selfishness of the political class, and the Bolter appears to believe that the higher ed vote has depressed the iron ore price.

Wacky stuff, but the best of it is how far the Right are moving away from the faux anti-elitism they depended on for so long. Now Eeyore Jacqui Lambie and Ricky Muir are part of the political class, and Muir is a “bloke who likes cars”, according to Kenny. By their pffffts you shall know them. Anyone can see that Muir, with no experience or tertiary qualifications, is doing his best to become a conscientious senator — as befits a man who started as a sawmiller, became a shop steward, and then a manager. But for Kenny, lifelong journo/adviser hack, a member of the political class if ever there was one, he’s just a petrolhead. Something for Muir and others to remember the next time NewsCrap come round, wailing about daddy and chucking up Brandivino. — Guy Rundle

Front page of the day. The Star Observer’s cover story promises to be a good read … 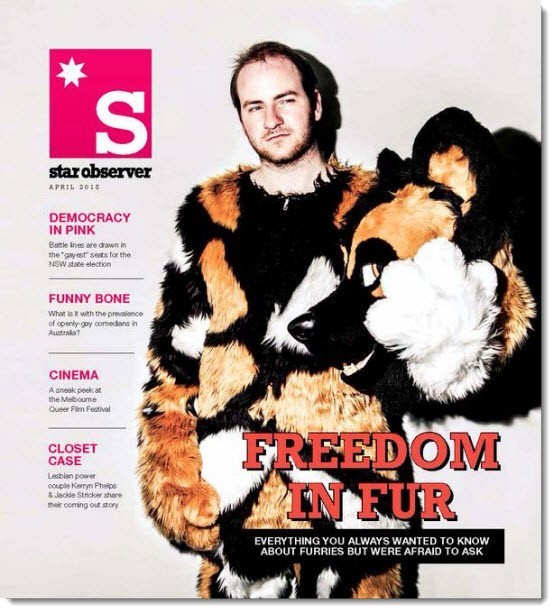 If SBS gave up football coverage in order to chase ratings it would be just a further step in the homogenisation of Australian media, apparently a central plank of the conservative agenda but a very sad day for Australia.

Totally agree with Professor Tournesol – what next for SBS, cooking competitions?

“Why Margie lost 20 Kilos” wouldn’t have been more germane?

Trust me – remain afraid of what you don’t know about furries. The truth will far outstrip your nightmares.

I have no idea what is meant by ‘furries’ and have no wish to delve.
I don’t know whether Blot was doing a deliberate hyperbowl but in defence of Abbotrocious on 2GB he referred to the “… alleged fox paw of the Guiness reference..”.
However he also claimed that only the rejection of Supply Bills twice is grounds for a Double Dissolution.