War, what is it good for? Employment for the counter-terrorism crowd

What ever would those employed by the counter-terrorism industry do if peace were to break out for good? 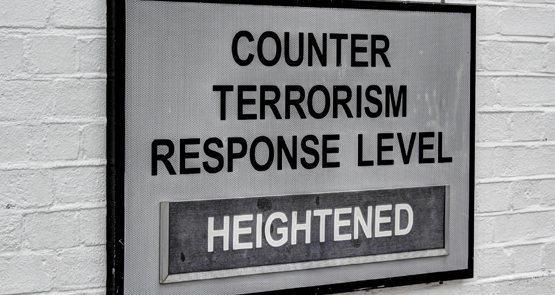 The reported death of Australian teenager Jake Bilardi in a suicide bombing last week has focused attention on Australia’s counter-terrorism industry, amid calls for the federal government to speed up the funding and implementation of programs to counter Islamic State’s seductive propaganda. And with Attorney-General George Brandis announcing $18 million to combat online extremism in addition to a yet-to-be-unveiled range of partnership grants, counter-terrorism is nothing if not a booming jobs-creation scheme.

Every once in a while, the rumour circulates that peace has broken out. Panic, of course, ensues. How are all those who make their living from war — if not an actual shooting war, then at least the threat of war — supposed to survive in peacetime? Those threatened with redundancy are not only the front-line warriors of the military-industrial complex, but all those who observe war, who analyse it, who recreate it in the form of Hollywood blockbusters and HBO mini-series. What are they supposed to do without the smell of napalm or the low hum of Predator drones in the morning?

Luckily the peace-mongering fad never seems to last for long. Samuel Huntington’s 1993 “Clash of Civilisations” essay came to the rescue of all those Cold War warriors dealing with relevance-deprivation syndrome after the fall of the Berlin Wall. And the bouts of phoney peace that have punctuated the War on Terror have always had their phoniness exposed before it could do any real harm.

As a subset of the military-industrial complex, the counter-terrorism industry has been doing particularly well since the rise of Islamic State (also called ISIS or Daesh). A multi-disciplinary enterprise that crosses sectors ranging from academia to policing to media to community organisations, the counter-terrorism industry is still thrashing out variations of George W. Bush’s post-9/11 “why do they hate us?” question, even if the former president is now regarded as an embarrassment since his “Mission Accomplished” verdict on Iraq disintegrated into thousands of slivers of hell. Sometimes it seems as though anyone who ever served in the armed forces, or had a Muslim family background, or studied Arabic/Indonesian/belly dancing, or made a trip out to Lakemba and found it kinda scary, is jumping aboard the counter-terrorism bandwagon, or at least hoping to pick up a few discarded crumbs.

In critiquing the counter-terrorism industry, I am of course biting the hand that has occasionally fed me (although far from lavishly). Critics of the industry risk sounding as though they’re just suffering from FOMO (fear of missing out), if not plain old-fashioned sour grapes. But the long queue of community leaders (most of them self-appointed), academics and public sector employees lining up for their share of the counter-terrorism pie is an unedifying spectacle, is it not?

The worst of it is that many of the potential initiatives that may receive support via counter-terrorism initiatives are good projects in and of themselves, but toxic when viewed through the counter-terrorism lens. Muslim community organisations are entitled to their share of government funding under the terms of the national multiculturalism compact, just like other religious and community groups, but when it’s linked to their support for counter-terrorism such funding risks making them look like government stooges. Islamic studies is worth funding for its insights into Islamic philosophy and literature as well as Muslim societies, but the main insight that it can offer into Islam and terrorism is that Islam is not the driving force behind organisations such as al-Qaeda and IS (note that I’m based in an Islamic studies department). Youth groups that offer a sense of purpose to disaffected teenagers are an important community resource and investment in the future, not just a diversionary tactic for budding suicide bombers.

And media reports over the past couple of days that “reformed jihadists” may be able to counter the message of their former organisations make a lot of sense — except that support for such initiatives from government or mainstream media would leave them dead in the water. Fairfax notes that any government support would be “discrete” and would be restricted to extremists who had not committed any crimes — but discrete government support for even one “reformed jihadist” would undermine the credibility of the entire reformed-jihadist narrative.

Disillusionment with IS does not in itself equate to support for government counter-terrorism initiatives. We should expect that some, if not most, of those who break with IS will remain highly critical of government policy, particularly on topics of security and foreign affairs. If they have not committed any crimes, then they should be allowed to go about their business without any expectation that they should be contributing to the counter-terrorism industry.

An industry that is only perpetuating the problems it purports to solve.

It is of course a perfect circle. The government pursues certain policies; eg. illegally invading another country (Iraq, Afghanistan). Those invasions create a counterforce as the citizens object to being invaded, bombed, droned etc. Their reaction is labelled “terrorism” justifying the introduction of ever more repressive measures which in turn set up counteractions. and so it goes on. The spooks get more money and resources; the government gets a constant “enemy” to scare us with; and the military industrial complex makes ever greater profits. Perfect for everyone except of course those invaded, bombed etc, and the great mass of people whose taxes pay for this travesty.

Shakira, I have a Muslim family, studied Arabic AND Indonesian but not belly dancing, and made a trip out to Lakemba (from Perth) and found it not scary at all. Do you think I have enough points to get a job in the industry? I could retire from the branch of the APS where I actually do real work and relax at last.

What would the counterterror henny pennys do without IS? They’d invent it, just like Iraqs WMDs, Irans nukes, Russia’s tanks in Ukraine. The chilling fact is that we are so easily herded.

Why am I reminded of breeding animals on which bounties were payable?