Australian veterans snubbed? ... Campbell Newman is moving on ... and the stupidest laws in Britain ...

Welcome home not so easy. Welcome Home parades will take place in major cities across the country this Saturday to pay tribute to the men and women of the Australian Defence Force who took part in Operation Slipper — that is, Australia’s involvement in Afghanistan. But we hear from a tipster that not all who served will be able to take part in the parade:

“There is apparently no capacity for current serving members, who are physically unable to march (due to their medical classification), to be incorporated into the parade format (at least that’s the direction from the parade organiser in one capital city), even if they have been injured as part of their service. These members are welcome to attend with members of the public. What a slap in the face to veterans and injured serving members, the government wants to drape themselves in the glory of our service people yet apparently those that are injured are not to be seen, just grist to the mill. On Anzac Day each year we honour veterans that are unable to march by providing motorised transport, surely a similar arrangement could be made for those members wishing to be part of the parade formally and have their serviced recognised honourably, though I wonder now if they would still volunteer after being rebuffed initially, perhaps some seating near the dais as a minimum. It’s not to late to rectify this callous slight. There is also a rumour that there has been a fault with dress uniform manufacture and that those members issued with the incorrect style of shirt are not to march either as they won’t have the correct uniform, the correct uniforms won’t be available in time. This beggars belief, have they learnt nothing from previous mistakes that have disenfranchised veterans to the detriment of their mental health.”

We put the tip to the Department of Defence, and were told:

“Defence has offered, and will provide support to any Operation Slipper veteran participating in the Commemorative Activities. Veterans who require assistance will be offered transport or seating in the VIP area for the march and ceremony.”

On the uniforms, a spokesperson said:

“Each location has determined the appropriate uniform for their event, taking into account local environmental considerations. Defence has not received any complaints about the uniform requirements for the commemoration activity. ADF members who have concerns should direct their questions to the Activity Coordinator in their location.”

Newman is a new man. Former Queensland Premier Campbell Newman has been out of a job for just under two months, but according to an eagle-eyed tipster, he’s on the front foot with some new business projects:

Newman updated his LinkedIn profile this week to say that he is now a director at Araluen Capital. There’s not much detail on what Araluen Capital is, or what he plans to do with it, but it’s not the first time the name “Araluen” has been used by Newman. Before being elected, he was a “trustee or director of Araluen Investments, a self-managed superannuation fund connected to a Westpac term deposit”. According to ASIC, the name Araluen Capital was registered just two weeks after the Queensland election.

What I like about you. A few months ago we wondered whether the massive spike in the number of people “liking” Prime Minister Tony Abbott’s Facebook was genuine or the result of purchased “likes” (40,000 people “liked” the PM in a single week). The PM’s office attributed his sudden surge in popularity to to Indian PM Narendra Modi posting a selfie with Abbott, not to “bought likes”. Now we seem to know the truth. Last week Facebook changed the way it measures each page’s “likes”, warning administrators that they may see a decrease as likes from inactive accounts are removed. This week Abbott’s page experienced a drop of 5762 “likes” — approximately 1% of his “likes”. While that’s a high number, it’s nowhere near the spike experienced in November. So maybe Abbott really is just really popular in India? Who would have thunk it? 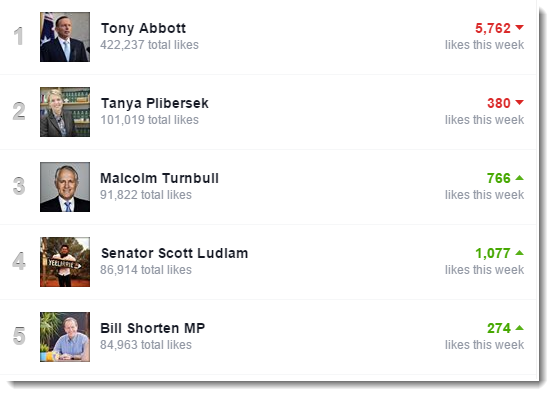 Wowser — Kaspar on the money. Last week Crikey‘s visual satirist Kaspar Wowser joked in this cartoon that the Apple Watch was just another way of counting down to death, but it seems that the joke wasn’t so far off the mark. A digital design group Rehabstudio is developing an app called Life Clock, and according to reports it will tell users how their activities affect their life expectancy:

“[The app] estimates how much time you have left on this rock, adding minutes for healthful activity and subtracting them when you indulge in bad habits. You can think of it as a mortality forecaster, or an activity tracker in reverse — instead of tabulating what you did in the past, it extrapolates what your behavior means for your future.”

The developers believe it could encourage users to give up smoking or exercise more, but it still has a long way to go until it ends up on an Apple Watch.

Preselection updates. In Victorian Labor’s preselection news, we hear that Mike Symon was successful in Monday’s vote and will represent the party in the seat of Deakin at next year’s election. Symon was the MP representing the outer-eastern Melbourne electorate until the seat was won by the Liberals’ Michael Sukkar at the last election. Sukkar won the seat on a 3.8% swing in 2013 — will Symon win back his old seat in 2016?

A royal level of stupidity. Among the data retention and the higher education deregulation, the House of Representatives found time to debate the “Succession to the Crown” bill yesterday — a bill that will allow changes to rules that govern the succession of the English royal family. Yes, we have to pass laws about whether or not monarchs can marry Catholics, or whether the eldest child (not exclusively the eldest son) of a monarch can be next in line for the throne. While the bill was supported by both sides, the debate managed to throw up a few gems, including from Liberal backbencher Fiona Scott. Scott used the opportunity to draw attention to some of the more ridiculous laws that have been passed by the British Parliament:

“For instance, it is against the law to die in the English Parliament — only a couple of years ago it was voted the stupidest law in Britain. Under the Metropolitan Police Act 1839, you cannot fire a cannon if it is placed within 300 yards of a dwelling. Nor can you walk along the pavement with a plank of wood. And then there is the 1279 law banning the wearing of a suit of armour in the Parliament! And apparently it is perfectly legal to shoot a Scotsman with a bow and arrow — provided you do not do it on a Sunday.”

Better go change our diary then.

DFAT out of Mardi Gras after Turnbull snub

The para on the Succession to the Crown Bill seems a bit confused? The bill is to change the succession to the crowns of all the Commonwealth realms, including the Australian Crown, not succession within a royal family. Every other realm has already made these changes, and all are waiting on the Australian parliament to finally do its part. The more interesting question is why has it taken so long in Canberra, but nowhere else? I’m also not sure why removing discrimination against Catholics and first-born daughters in succession to the Australian Crown should not be debated in the Australian parliament? The point of the member for Lindsay’s list of ‘ridiculous laws’ made by the British parliament entirely escapes me – compounded by the heading ‘a royal level of stupidity’. The laws were made by parliamentarians, not royalty, and I don’t see the connection. I think Australian parliamentarians have made it illegal to take a life in parliament, fire artillery in residential areas, move large unwieldy objects through public thoroughfares where they can hurt other people, shoot anyone with any weapon on any day, and didn’t they recently try to segregate people wearing metaphorical armour such as face coverings and bike helmets? Perhaps the people of Lindsay (or at least their representative) live in a world without history or any sense of the way language evolves over time? If this is the sort of gem that gets thrown up in parliament, it must be of the cubic zirconia variety.

Re Campbell Newman and Araluen Investments
Araluen is a Northwest Tasmanian Aboriginal word, usually translated as ‘a place beside running water’ It was the name of my Grandfather’s shack beside the creek at Sister’s Beach. He (Grandad) used to joke that a more appropriate translation would be ‘up the creek’
How fitting that Mr Newman has chosen that as a name for his new venture…

Thatcher’s government in the welcome home parade for the Falklands victory disallowed injured servicemen from appearing as it was deemed to detract from the joyous occasion.
Shortly thereafter the torys won a khaki election having been a goner pre war.