Luke FOLIAGE!!! HAHAHAHA. Get it? People who like trees are loonies.

The Daily Telegraph has gone all out today with a front-page splash of Labor’s Luke Foley in a koala suit. Through the magic of Photoshop, the NSW Opposition Leader is holding a Wilderness Society donations bucket, but his green-tinged face makes him look more like an extra from the set of Mork & Mindy than a tree-hugger. Here in the Crikey bunker, we were confused, but we think the message is … that people who want to live in a clean environment are nutcases? 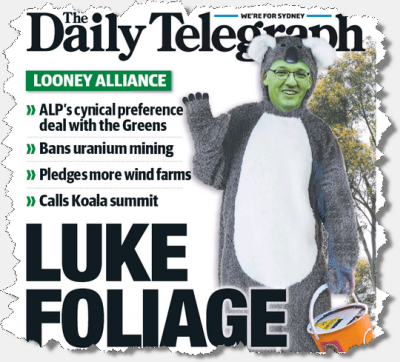 It’s one thing for the conservative media to question the basis and benefits of an economic scheme to address climate change, such as the carbon tax (even though conservative icon Margaret Thatcher was among the first to demand climate action), and there’s plenty wrong with Luke Foley and NSW Labor for critics to attack. But does anyone, even on the far Right, really think protecting koalas is a bad thing, or that “foliage” is an insult?

Today’s front page is yet more evidence that the Murdoch tabloids are losing touch with the electorate.

“Foliage”? Isn’t that what they wipe their bum with when they’ve run out of Murdochpaper?

I think the only loonies are those who read the Daily Telegraph (and believe it). …Ohhh and those who write the headlines.

Bearing in mind the blandness of most political candidates these days a bloke in a koala suit may warrant a first preference.

Maybe they are hiring new graduates to write headlines – no experience, no sense and an undergraduate sense of humour.

I think that such ugly idiocy would suit the target audience’s ignorance level. Don’t forget that Loud John Jaws never put off his slavering listeners however often he yelled into his gilded microphone ‘dooooo gooders</I' as a form of insult & abuse.
Alas & alack.