Pop quiz, hot shot: what you need to know to become an Aussie

What's Donald Bradman's batting average? What was the most successful horse ever to run the Melbourne Cup? Howard's "culture" questions have gone from the citizenship test, but there are a few curveballs left. After eight years, numerous visas, lawyers, about $10,000 in fees (visa fees, medical check fees, English test fees … the list goes on), it came down to this: 20 questions on a circa 2000 PC in a windowless room in a soulless building in Melbourne’s CBD. These 20 questions would determine whether I would become an Australian citizen.

Actually, it’s not that dramatic. You only need 15 correct answers to pass, and you get three goes at it. What happens if you don’t get enough correct on your third go? I don’t know. But the questions were mostly straightforward: when is Anzac Day, what do courts do, who signs a bill into law. Gone are the Howard-era cultural questions about Donald Bradman’s batting average and Makybe Diva. And though the Crikey bunker had quizzed me on my knowledge of quotes from The Castle (“tell ‘im he’s dreamin’!”, “it’s the vibe of the thing” etc) beforehand, that didn’t appear on the test either.

The Immigration mandarins administering the test and assessing identity documents were friendly and helpful, many of them migrants themselves. Behind them on the walls were various bits of Australiana, such as the lyrics to Advance Australia Fair (also an answer to one of the questions, “what is the title of Australia’s national anthem?”) surrounded by cartoon koalas playing soccer with emus, and a framed copy of the citizenship pledge surrounded by more cartoon native fauna.

Most of the questions were innocuous, but a few drew attention to a past I was surprised to see Australia highlighting. Such as the question: “Who were the first people to live in Australia?” The answer was “Aboriginal and Torres Strait Islander people” (other options: “British people”, “European people”), but it was an awkward reminder of the terra nullius doctrine. Another question on the purpose of the constitution also put me in mind of the indigenous recognition campaign.

My favourite question was “Which of these is a privilege of Australian citizenship?”, to which the answer was “Joining the Australian Public Service”. I wonder if Immigration put that one in there to hearten its own staff.

So, wannabe new Australians, don’t worry. Some common sense and a basic understanding of Australian government will see you through. The only stumbling block is the vibe of the thing. 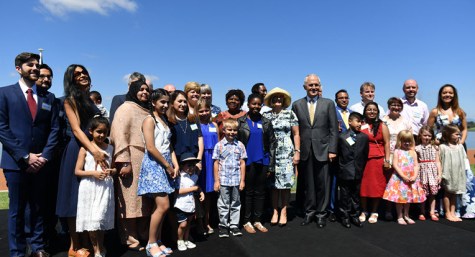 Want an Australian visa? First, sign up to our values

One of the questions on my citizenship exam (in December 2014) was unanswerable. I don’t remember the exact wording, but the question was similar to this.

I thought the answer was “b”, but people from the Torres Strait weren’t “Australians” until the 60’s, so I answered with “a”.

I would like to know what the correct answer is, but it would require a definition of “first”, “Australians”, and “from”. I can’t be bothered.

I would have thought the obvious answer is (a), since before that it wasn’t called Australia.