Moore Park the new battleground of the NSW election 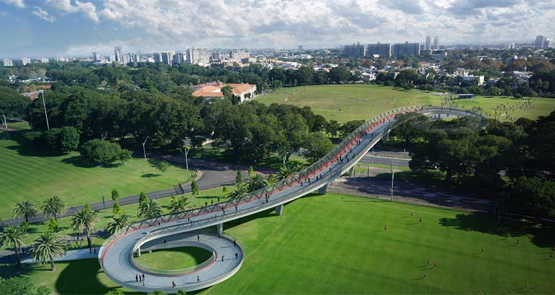 There are death and taxes, of course, but then there’s one more dead cert in life: if you hand over public land for private use, you never get it back. Ever. And you could add another certainty to this list. The more people you crowd into apartment blocks, the more precious the available green space becomes. Sydney’s population is growing rapidly, and nowhere is this more evident than in the suburbs surrounding our CBD.

So it’s particularly concerning that the rolling green fields of Moore Park are once again under threat. Moore Park is managed by the Centennial Park and Moore Park Trust, which also takes in Queens Park and the Entertainment Quarter. Under its act, the trust’s role is to: “maintain and improve the Trusts land, maintain the right of the public to the use of the Trust lands, and ensure the protection of the environment within the Trust lands”.

The second of those three responsibilities — to maintain the public use of the trust lands — is the critical one here, and it’s under threat.

Right now, there’s a silent takeover move underway by the Sydney Cricket Ground and Sports Ground Trust for a large chunk of Moore Park for the inevitable use of elite sports. The SCG Trust includes some of the most powerful business and media names in Australia, such as Tony Shepherd, Maurice Newman, Rod McGeoch and Alan Jones, and they manage both the Sydney cricket and football stadiums. In 2010, a similar attempt to make a move on Moore Park was thwarted by a public outcry and a firm “no” by the then-premier Kristina Keneally.

Not to be daunted and under a new government, the SCG Trust produced in 2012 its own “masterplan” (curiously, no longer to be found online) with a neat red border incorporating not just its own land, but vast stretches of adjoining Moore Park and the Entertainment Quarter. This glamorous digital presentation refers to a “regenerated Moore Park East”, new plazas and squares, new playing fields for national and professional teams, a rugby centre of excellence, the closure of Driver Avenue, a two-level above-ground carpark for 1600 cars and another 2500 parking spots below ground.

Ominously, marked clearly on this masterplan is a new bridge crossing Anzac Parade that would feed people directly into this new precinct. Last month, right where the SCG masterplan had placed it, Roads Minister Duncan Gay opened the $38 million Albert “Tibby” Cotter Bridge, described by many, including the NSW Heritage Council, as of limited use and a waste of money. Is the true answer that this bridge is, in effect, stage one of the SCG Trust masterplan? The Trojan horse that makes everything else possible with a simple flick of the legislative pen?

With a Coalition government in power and favoured to win the March 28 election, the political climate could hardly be better for a quiet gentlemen’s handshake to seal the deal. The Baird government has already promised, if re-elected, a share of a $600 million allocation to upgrade the football stadiums in Sydney, with most of that to go to the Sydney Football Stadium.

It must be pointed out that the Centennial Park Trust has had an excellent record of maintaining the sporting fields in Moore Park, with long-term deals with the Sydney Swans, Sydney Roosters and NSW Waratahs. When those elite groups are not using the fields, and that is on average 86% of the time, they are available for community sporting groups and public recreation.

Efforts to get answers from both the SCG Trust and the NSW government about plans for Moore Park have been met with complete silence. Reports suggest the government is in favour of the plan but is not keen to move until after it has been re-elected. It’s understood the Centennial Park and Moore Park Trust wrote a detailed letter to Environment Minister Rob Stokes last month outlining its concerns and seeking a meeting, but there has been zero response.

There is nothing wrong with elite sports. But they must not take precedence over the needs of the wider population who like to read a book under a tree, kick a ball with their kids, walk their dogs or simply breathe the beauty of parklands that have been part of the public fabric of this city for at least a century. If the state government has no plans to change Moore Park, it should speak up now. Otherwise, it must come clean with the many thousands of people for whom Moore Park is their backyard.

While there is an underlying issue of maintenance of green space, it is the entertainment quarter where the real fight is for the CP&MP Trust and SCG Trust.

Due to the change in the funding arrangements for CP&MP made by the current government to put it on a more commercial footing, the money flows from the EQ is what is keeping the trust going.

If there is real concern for the conservation of green space in Sydney, ask what happens to Centennial Park should funding be restricted.

Also – about the bridge – it should be no great surprise that the footbridge was placed where it was given historical flows for crowds to the SCG precinct. It was only around the time of the Olympics that fencing was erected down the middle of ANZAC Parade severing the linkage of the paths from the SCG that lead directly from Devonshire St (the street that links directly to the entrance/exit at Central Station).