Isentia Index: Lazarus lives on as an independent

The state election in New South Wales bumps Abbott off the top spot in radio.

The Palmer United Party adventure seems all but over, after the party’s Senate leader Glenn Lazarus resigned to sit as an independent, joining Jacqui Lambie as an ex-PUP and leaving only Senator Zhenya Wang and Clive Palmer himself in the lower house. In going for candidates with existing profiles, and clearly with their own ideas, Palmer seems to have lacked the conciliation skills to keep his party together, which many in the media expressed no surprise about.

That change hasn’t made things any easier for the government in the Senate. In fact it’s probably slightly more difficult, there now being eight separate entities to try and negotiate with (not including Labor and the Greens). Education Minister Christopher Pyne’s tertiary education reforms showed that in spades, failing to get through the Senate again, only three of six crossbenchers needed backing the bill, although the four senators previously (or still) affiliated in some way with PUP voted in a bloc against it, so perhaps things aren’t that different after all.

The longest serving crossbencher of all of them, Senator Nick Xenophon, unsurprisingly chimed in on both those leading issues, expressing surprise at Glenn Lazarus’s decision while relishing the chance to use a few black knight jokes about his fellow South Australian, but also giving his two cents on the controversial metadata capture laws, expressing concern that new safeguards would still not adequately protect journalists’ sources. 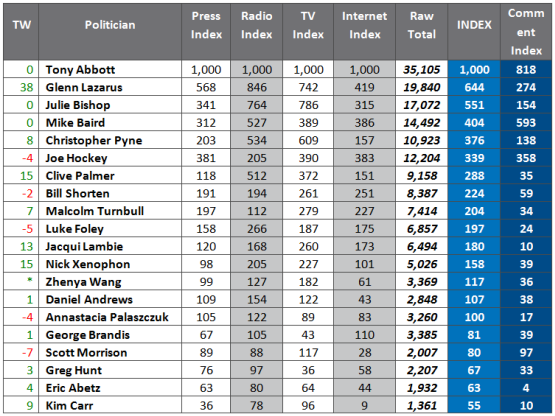 The NSW election was the main game in a quiet political week on talkback, plenty of discussion of privatisation and the planned WestConnex tunnel through Sydney’s inner west.

Twitter seems to be maintaining the rage about the Federal Liberal leadership, no matter how much the rest of the media has moved on…for the moment at least.

Pete Evans’ “paleo” child diet book (if you can’t spell it maybe you shouldn’t push it?) has created significant controversy at the intersection of freedom of speech and child safety. One would hope new parents would be sensible enough to listen to the overwhelming body of expert opinion, not a couple of oddbod s… just like we’ve all done with climate change …