Baby come back: can Palmer lay claim to the brick with eyes’ Senate seat? 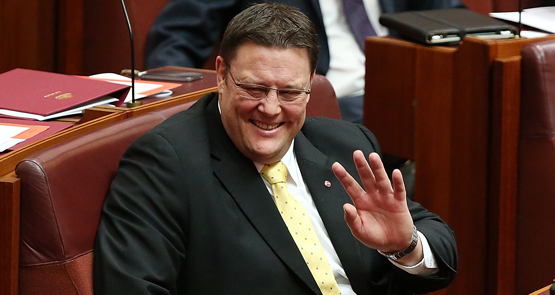 In what appears to be an act of reciprocal dummy-spitting, on Monday the Palmer United Party announced it was considering legal action against Glenn Lazarus after the Senator resigned from the party last week. Lazarus’ resignation, following on from Jacqui Lambie’s departure, has cut PUP’s Senate presence from four (including Motoring Enthusiast Ricky Muir) to a lonely one, and there are concerns that the public’s votes are no longer being represented.

“Voters put the Palmer United Party before Mr Lazarus, and we do not believe he holds the seat on his own merits,” said PUP’s national director, Peter Burke.

Burke says discussions are underway with the Democratic Labour Party, which is pursuing legal action against John Madigan after his resignation last year.

Does this sound familiar? Crikey has looked into the legal details of this issue before when Jacqui Lambie defected from the PUP last year and became an independent. When a citizen votes for a political party, does the seat belong to the individual or the party itself?

Australia doesn’t have any laws that specify that senators must vacate their seats if they defect from their party. However, under section 15 of the constitution, if a senator vacates his or her seat, he or she must be replaced by a party member who endorsed the senator at the time of his or her election.

But constitutional law expert Professor Cheryl Saunders from the University of Melbourne believes that section 15 does not constitute valid legal grounds for a lawsuit. “In its original form [section 15] dealt with the situation that arose when a senator died or retired from the Senate before the end of his/her term … The section was extensively amended in 1977, to require any vacancy to be filled by the state with someone from the same political party for which the retiring senator was elected. This change recognises the contemporary importance of parties in the Senate, but does not, in my view, alter the underlying scheme of the section. In other words, the reference to ‘vacancy’ in section 15 refers to the withdrawal from the Senate of the person elected as a senator, for whatever reasons, not to the resignation of that person from the party.”

“If Lazarus were to resign, the section would affect the way in which that ‘vacancy’ was filled — but it cannot be used to force a resignation,” she said.

According to constitutional law expert Professor Anne Twomey from the University of Sydney, the only way a senator could be forced to resign his or her seat is if he or she were “found to be a citizen of a foreign country, or [were] convicted and under sentence for an offence punishable by imprisonment for one year or longer, held an office of profit under the Crown or a contract with the public service”.

So unless Glenn Lazarus and John Madigan turn out to be secret Russian citizens, or bankrupt Russian murderers, then a successful High Court case against them seems unlikely.

A High Court challenge may not be successful but an unfortunate accident involving Ms Lambie and Mr Brick could be a good result for the Pup. I believe Vlad Puttin may be able to put them in contact with some very useful operators who are skilled in unfortunate accidents.

A fair point Trevor. However it would seem that Cliveosaurus has about as good a knowledge as Bufo Brandisensis (bufo being a cane toad) of the nation’s law. We do not elect parties to seats we elect people. We do not elect PMs. The parliament does that. What a collection of ignorant boofheads. As I suspected when Palmer became a matter for the big boys in the press, he would struggle. As did the other more dangerous boofhead from Qld Sir Joh.

I’m more interested in the Fairfax by-election when the PUPmeister resigns, either in pique, boredom or being declared bankrupt.
No way he will be the MP at the next general election.