Rundle: one cheer for Clive, unlikely saviour of the Left

It was Clive Palmer who stopped the government passing its disastrous budget, so stop dancing on his political grave. 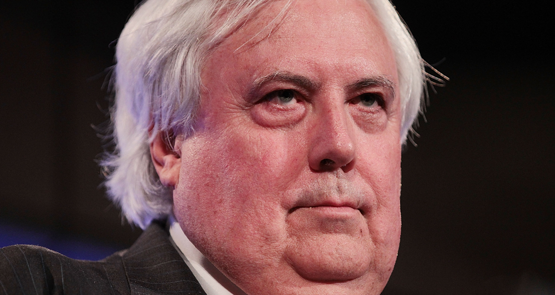 Poor old Clive! Does anyone else feel sorry for him? No? Just me?

Two weeks after his beloved dinosaur Jeff was burnt to the ground, one week after his beloved sasquatch Glenn Lazarus stalked away from the party, Clive has now shut down the Coolum resort for refurbishment — or, as anyone who has seen it might say, furbishment.

Can’t kick the feeling that that is like the sign on the front of a failing restaurant that has closed its doors: “We are taking a few days to make the Maroubra Rajasthan an even more exciting dining experience! Please do not to try to contact us.”

The Palmer United Party will now be his Cliveness and Dio Wang. It will be like the first three-quarters of an hour at a party, with the people who didn’t understand what “9pm onwards” means.

Will Clive stick around at all? Without the balance of the balance of power, it’s going to be mighty boring there. He is criticised for poor attendance in the Reps, but really, what does it matter?

That’s just part of the rhetoric around our pseudo-democracy — that the entire backbench of the Coalition might suddenly split down the middle, and the budget will hang on one vote, and it will all be down to one independent …

But that’s been par for the course with the passing Palmer parade — stuff that goes on under the cover of party politics all the time gets special attention when Palmer does it.

There is rejoicing in the land at Clive’s demise, not on party politics lines, but on general propriety lines. That is ridiculous. All Clive did was to show up how un-democratic our system is and how easily it could be gamed. If it’s possible for anyone to do what Palmer did — because of the absence of election spending caps, for example — then it’s the system that needs to be changed. The alternative is to expect all multimillionaires to be perfectly virtuous as regards politics — a long shot.

Furthermore, whether people like it or not, Palmer proved to be the vital block, whereby the Abbott government’s horror budget, and its whole post-election strategy, could not pass — and in fact, came apart entirely. Had there been a crossbench consisting of eight entirely independent senators (or seven plus one extra Liberal), the odds of the Coalition getting the budget through — the co-pay, the dole malarkey, the higher ed charges — would have been much higher.

And had it got those changes through, the government would have been in a much better place. Abbott’s gaffes would have appeared as the eccentricities of a PM who got a budget through and set an agenda. Now, with the budget collapsing in shambles, Abbott’s gaffes serve as stark reminders of a wider incompetence.

That was the Clive effect, like it or not. More than that, it was Palmer who was willing to talk a simpler language of morality about things like the co-pay and its effects on pensioners, and the four little old ladies from Maroochydore (whatever their deal actually was …). Labor couldn’t hit that note, or didn’t even try.

How important was that budget defeat? For the government, very, and not in a good way. But it was also important for the things themselves. We’re passing through a crisis for the Right, and for their neoliberal/neoconservative policies, and if things like the creeping privatisation of the health system can be held off, they can pretty much be taken off the table. But if they get through, it is far more difficult to reverse them.

So one cheer for Clive Palmer, whatever happens now. Wherever his commitment to rejecting the budget came from — and I believe it came from his Catholic beliefs, not merely a desire to screw Abbott and Campbell Newman over — it was Clive what won it.

What happens now is anyone’s guess.

Why ‘little’ pharma should be calmer: on the whole, COVID’s been good to chemists

Spot on Rundle. Palmer disrupted normal parliamentary business and stalled the worst ideological excesses of the Abbott Govt IPA juggernaut. For whatever reasons, we are the winners, for now.

Old media seems completely oblivious to all this, mocking his Cliveness at every turn for just being his hyperactive word-tumbling self, and fixated as they are on re-playing the Rudd/Gillard years with substitute actors. The hacks know the script now and can write the lines in the dark.

Like your line about Clive hitting the classic working class rhetorical notes that today’s millionaire-infested, nicely-presented, Coalition-lite ALP has long forgotten. Shorten is an Abbott clone without the onion.

Still, we have high hopes for the heroic bogan Lambie/Lazarus/Muir axis…

Well said. Hate the way it happened, but have been surprised at Clive’s actions once in parliament but more so by his (now mostly ex-) minions and Ricky Muir – actual working-class people in parliament, who could believe it!

Agreed – let’s give credit where credit’s due. Clive may be the most unlikely hero since Bilbo Baggins but he’s pretty much saved us from our own Necromancer. Shorten and his lot, on the other hand, have been pretty much the Dwarves of the Blue Mountains: absent from the battlefield.

“Pseudo-Democracy” sums it up nicely

So that makes it six claps, including mine. Great reading and soooo true.