Nudists don't sell. And other media tidbits of the day.

The naked truth. Yesterday, we reported on a proposed pilot program between Australia’s major magazine publishers and distributors and 20 newsagents around the country aimed at sorting out the mess than is the distribution and sale of hundreds of magazine titles. The aim of the pilot will be to reduce the cost of magazines to newsagents, distributors and publishers by cutting the time titles remain on display, cutting out low-selling (or non-selling) titles, reducing the number of magazines actually distributed, even of the bigger selling titles, and lowering the working capital costs for newsagents and publishers.

Newsagents in Sydney have pointed to one particular new magazine as exemplifying the current problems. TAN magazine, The Australian Naturist, describes itself as “the world’s most popular naturist publication” (yes, that means nudist). It has started appearing in some newsagencies in Sydney’s inner-west in the past three months. Newsagents have received three issues (it’s a monthly). First up, they received one copy, which was unsold. Then five copies, also unsold. Newsagents received and displayed 11 copies of the current issue. So far there’s been no sales. The newsagents are up for the cost of stocking all the copies. The distributor is Gordon and Gotch, one of the two distributors in the pilot program (the other is Bauer’s Network Services). TAN is also available online in a PDF edition. — Glenn Dyer

But this commonality of coverage is confusing readers. Here are six business-related stories from the AFR that are repeated in the more general mastheads this morning. The “voices” of the three papers are no longer quite as independent as before. It’s all a bit News Corp (where copy-sharing is widespread). — Glenn Dyer

Aussies abroad. So we’re a little late to this one, but former Fairfax foreign correspondent Pilita Clark has become the first Australian reporter in several years to take out a gong at the British National Press Awards. She was last week named the British National Press Club Awards Specialist Journalist of the Year for her work as an environment correspondent for the Financial Times. It’s not the first gong Clark has secured in recent months — she also won the Environment Story of the Year award at the Foreign Press Association’s awards in November.

There aren’t many Australians taking out gongs on Fleet Street. Crikey believes the last Australian journalist to win a British National Press Award was Phillip Knightley, who won in 1988 (and 1980) while he worked at the Sunday Times. Other Australian winners included Clive James (in 1977 and 1981 for criticism in The Observer), John Pilger (in 1979 and 1977) and the late Peter Harvey, who won News Reporter of the Year in 1972 while he was at The Guardian. — Myriam Robin

Video of the day. Republican presidential hopeful Ted Cruz was using his typical fire-and-brimstone language at a “Chili and Chat” event in New Hampshire, but when he said “the world is on fire”, one small member of the audience took umbrage: 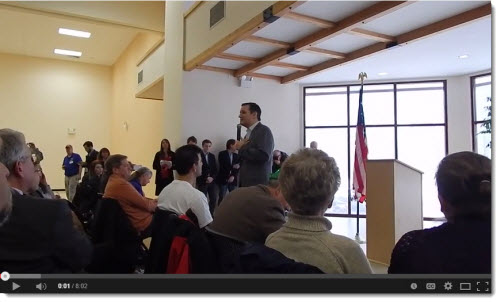 Buddy, can you spare a dime (to read Andrew Bolt)?