What is going on with the No Land Tax Party? ... Labor MP slams data retention ... can you bear it?

No Land Tax Party party. The NSW election has thrown up some interesting minor parties, with the No Land Tax Party nabbing the first position on the upper house ballot paper and also running candidates in every lower house seat. As reported in The Sydney Morning Herald, these candidates are mostly from the same group of families, and only a few actually live in the electorates where they are running. A few tipsters have got in touch wondering where the money has come from:

“Greens candidates are worried about the amount of No Land Tax party candidates being run in the NSW state election. The party is running the full 93 candidates (that’s how many seats there are in the Legislative Assembly). Who’s backing the new party and how have they managed so many candidates so quickly? Other minor parties are only running a handful.”

We also hear from another source that the No Land Tax Campaign has raised funds in “the six figures”, to bankroll its comprehensive campaign, but the donations disclosures only list $13,000 in donations this year, and less than $20,000 in donations last year. We spoke to Peter Jones, the party’s lead candidate in the upper house, who told us that “90%” of the donations are from individuals, not corporations, and most of them are property investors. Most of the party’s starting funds came from a loan from Jones himself. Jones said he would be happy to compile a list of donors to show where the funding comes from, and the party’s declarations show donations from Ray White and the Property Owners Association of NSW. We asked Jones if the donations were in “the six figures”, and he replied: “We had one donation of $6000”.

Jones told Crikey that even though the No Land Tax Party had been organised in getting candidates and funding, the campaign had been held up in negotiating preferences with the Liberal Party. Jones had some choice words to say about Liberal president Tony Nutt after Nutt failed to return his calls for six months. Jones says the No Land Tax party has been forced to negotiate preference deals with individual candidates instead of the party as a whole because of the lack of communication. Jones says the ALP was “streets ahead of the Liberals in terms of the campaign”.

We’ve also been tipped off that the No Land Tax Party is advertising to pay people to hand out how-to-vote cards on election day. According to electionwork.com.au, there will also be bonuses based on the amount of votes the candidate gets: “If the local candidate you are handing out for gets 10% of the vote at your polling booth, you will receive a $200 bonus.”

Data retention dissent. Bill Shorten has written to Prime Minister Tony Abbott saying that he is concerned about how the government’s metadata laws could affect journalists and whistleblowers (though the Labor Party is voting with the government on the issue), but we hear from a tipster that Labor MP Alannah MacTiernan is still letting her constituents know how she feels about the issue, and her party’s stance on it:

“A friend & I both called MacTiernan’s office to comment on the data retention legislation, and were told by a staffer that she was very angry about the ALP caving on the issue. (Go Alannah!)”

No Dan fans here. The Australian Grand Prix finished up yesterday, and while many onlookers were just wondering why Arnold Schwarzenegger was given the job of post-race interviews with the winning drivers, we hear that this year’s race has added more fuel to the flame for locals who think the race should be put on the scrapheap:

“Observers at the track report there was no comprehensive scanning of tickets occurring. Gate workers say they only use scanners to check tickets printed at home and there is no actual count occurring at the gates.”

For years the Australian Grand Prix Association has only be able to offer an “estimated attendance” figure — last year’s was supposedly the second-largest in eight years. The last of ticket scanning goes part way to explaining why the numbers are only an “estimate”.

Missing pages at the AFR. A Canberra-based tipster tells us the Weekend Financial Review was missing eight pages this Saturday, finishing on page 48:

“The Weekend edition of the Financial Review (14-15 March) as distributed in Canberra was printed without its last 8 pages. The full 56 page issue can be read on the website but the 48 page print edition finishes in mid air, half way through a feature on “John Denton’s Moscow” (continues on the missing page 49). It’s also sans its editorial pages, the back page features, and the continuation of articles that start earlier in the issue. It’s not because there are any missing sheets – page 1 is on the same sheet as page 48. Someone in the printing department is presumably getting it in the neck for formatting up what could become a collectors’ item.” 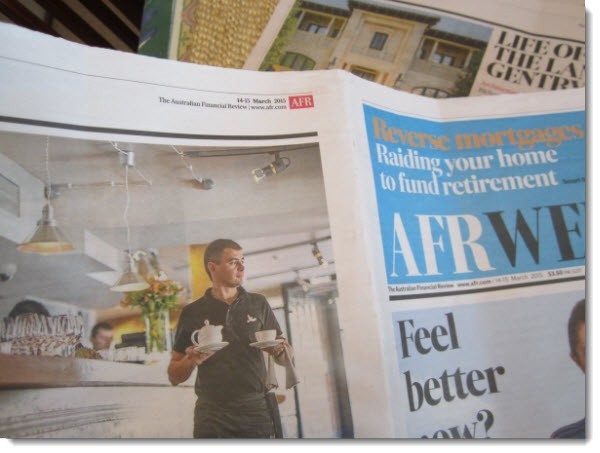 This is how the page 48-49 spread was supposed to look: 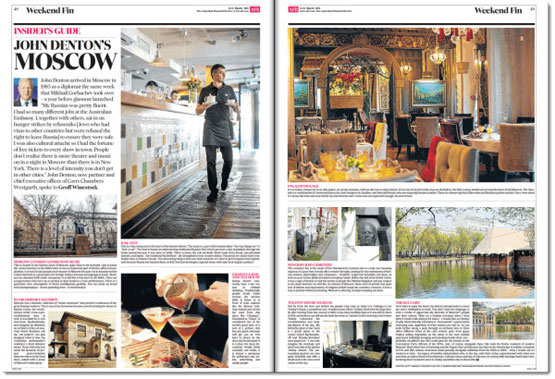 Family matters. The Palmer United Party is quickly becoming the Palmer (and friend) Party, as Glenn Lazarus and his, wife Tess Sanders-Lazarus, accuse Clive Palmer of being a “bully” and using “foul language”, but one tipster has asked whether or not Tess Sanders-Lazarus should have been working in her husband’s office in the first place, referring to the senators and members entitlements handbook:

Ed ‘two kitchens’ Miliband. The hapless UK Labour leader is in trouble again for having a photoshoot in his relatively modest London home, showing him having a quiet cuppa in his modest kitchen. Except… the place has two kitchens, one of them the usual steel fridge and granite top affair, the other a small kitchenette left over from the place having once been a couple of bedsits. Guess which one Red Ed had the photoshoot in? Guess how long it took for the story to get out?

But the best of it is this tweet going around, which says it all really: 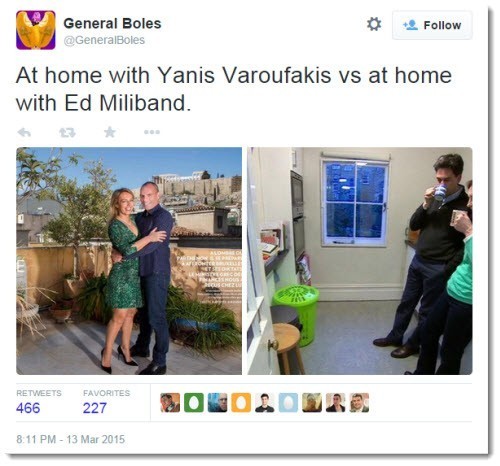 Bad dog! In Friday’s Media Watch Dog, Gerard Henderson was outraged that Ms Tips had “pinched” Nancy’s “Can you bear it?” line in last Friday’s edition of Tips and Rumours. “Shame, Crikey, shame” ran the headline. Ms Tips hates being bopped over the snout with a rolled-up newspaper, and we would like to clarify the record to tell Nancy it was a loving homage, rather than theft. Imitation the sincerest form and all that.

Considering the amount of public funding the Grand Prix gets, its appalling that attendance figures are not (a) recorded properly and (b) made public.
I saw the figure for this year of ‘an estimated 100,000’ – I could have plucked that figure out of the air and I didn’t even watch the stupid race.

Re Family matters:
Am I missing something? Doesn’t the piece quoted from the handbook say “Senators and members are not prohibited from employing a family member or another senator or member.”?

Those damned kitchens are dangerous places as Gillard might agree.

That small print is “employing a family member OF another senator…:”

…and the following small print just says that if you do employ a spouse (for example)the employment conditions are governed under a different Act.

That second Act should be looked at to determine if there were particular issues with the employment of Tess Sanders-Lazarus.

Thank you frey, you’re right. Eye test time. Lazarus didn’t try to hide her so I guess the clerks would know if her employment complied with the other act.