Mayne: <em>Hun</em> happy to ignore handouts when it suits the Murdochs

The Sunday Herald Sun has criticised Melbourne City Council for what it sees as lavish expenditure. But it wasn't too concerned when ratepayers were forced to subsidise Dame Elisabeth Murdoch's funeral. 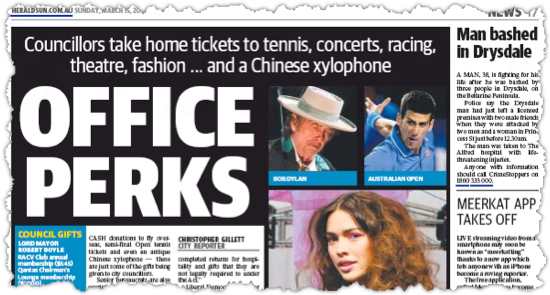 It is all very well for the media to rail against free speech laws that censured two Andrew Bolt columns, defamation constraints that allow Treasurer Joe Hockey to sue Fairfax, and these proposed metadata retention requirements, but what Australia really requires is a culture of transparency in key institutions — and laws that demand it.

However, for as long as the media routinely sensationalises issues, makes basic errors, ridicules elected officials, and overwhelmingly opts for the negative angle, it will be very hard to achieve this.

Take the City of Melbourne as a case in point. Over the past two years, we have systematically opened up the council’s operations, yet despite more than 20 specific transparency initiatives Australia’s highest-selling newspaper, the Herald Sun, is yet to write a single story about it, let alone offer any praise.

Indeed, the biggest internal resistance I get from officers and councillors is that the extra disclosure will just give the Herald Sun more material to launch cheap negative attacks.

And so it was yesterday. Under the big headline “OFFICE PERKS” on page 17 of the Sunday Herald Sun, energetic young Murdoch reporter Chris Gillett opened his story as follows:

“Cash donations to fly overseas, semi-final Open tennis tickets and even an antique Chinese xylophone — these are just some of the gifts being given to city councillors.”

The only problem here is that the tennis tickets were for a senior officer — not a councillor — and the cash donated to me for a trip to Los Angeles last November had nothing to do with council: it resulted from passing the hat around to raise funds to attend the News Corp and 21st Century Fox AGMs.

I wasn’t obliged to make the disclosure of the two $1000 donations from people who don’t even live in Victoria, but did so to take the governance high road. The result? A Murdoch whack for raising funds to promote better governance inside the corporate empire of the world’s most powerful family.

In a combination that was twinned online, the Sunday Herald Sun also carried this toxic comment piece by deputy editor Matt Cunningham, which basically said all community-elected councillors were rorting, self-interested political hacks.

Cunningham favourably quoted the example of Cr Mary Donnelly, who donated $2000 of her own money to get a historic clock in Cootamundra going again and suggested more poorly paid part-time councillors should start funding community projects out of their own pockets.

Laurie Oakes obligingly retweeted Cunningham’s caustic opinion piece, without pointing out that his secret salary is probably about the equivalent of what 50 typical Australian councillors are paid for their work.

For the record, Sam Mostyn was paid $110,000 for her part-time work as a director of Virgin Australia in 2014-15, where she also received considerable undisclosed benefits flying around the place at the pointy end of those Virgin planes. No guilt trips there!

In a late Saturday night exchange on Twitter, Matt Cunningham presaged his page-71 Sunday column when he claimed “you can’t keep jacking up rates while taking junkets” and “councils keep using ratepayers’ dollars on ridiculous things like sister cities”.

What Cunningham and his ilk don’t recognise is that councils get hit with requests to fund all manner of things, and spending on junkets and sister cities combined would represent about 0.1% of council spending across Australia. It’s just not material.

For instance, one family that didn’t follow the noble example of Donnelly and her clock restoration project was the Murdochs themselves.

When family matriarch Dame Elisabeth Murdoch passed away at 103 in late 2012, the City of Melbourne agreed to a written request to waive $4135 in fees for a tribute event that was held at the Melbourne Town Hall on December 18, 2012. (See page 4 of this committee report from February 12, 2013.)

At the time I thought it was odd that a family worth $10 billion had its hand out for ratepayer funding, but voted in favour in a confidential session thinking that there was no point being churlish and the dollars simply weren’t material.

However, more material was the successful News Corp requests for $70,000 of annual council support for its loss-making NRL franchise Melbourne Storm. Most sporting teams are not-for-profit, but this salary-cap rorting operation was controlled by a billionaire, New York-based US citizen called Rupert Murdoch.

Melbourne Storm has since been sold to a local consortium, but if these overly negative and cynical Murdoch hacks want examples of unnecessary ratepayer spending, they could have looked a bit closer to home.

*Cr Stephen Mayne chairs the finance and governance committee at the City of Melbourne.

Mayne: how News Corp extracted a quick-fire $230k from the City of Melbourne

So much for “investigative journalism” (the Keane/Dyer article) – from the self-censoring elites editing “public interest”/what we get to see?

Excellent! Await a response from the Murdochs.

Our Rupert who art in America,
Hypocrisy be thy Name,
Thy FoxNews come,
Thy will be done in government, so you can screw everyone,
Give us this day our limited news and forgive us our sceptisisms,
As we have the wool pulled over our eyes,
Lead us not to the ABC, but deliver us pay TV,
For thine is the voting shareholding, and the influence, and the profit, for ever and ever.
Ah Lachlan.