Another NSW tablecoth? The countdown to the NSW election is getting to the pointy end, and yesterday’s draw of the ballot paper has drawn mixed reactions from across the political spectrum. The mammoth upper house ballot paper features a record 394 candidates from 24 different groups. The No Land Tax Party grabbed the top spot (remember its dodgy website?) and Fred Nile’s Christian Democrat Party drew column Q, which Nile is seeing as a positive. “Q is for the Queen … because we’re a monarchist party,” Nile said, but he doesn’t want us thinking he’s got any colourful associations, “not a Mardi Gras queen”. The Australian Cyclists Party drew the final column, which they are also happy about. President and founder Omar Khalifa has described it as “actually excellent”. “If you can be not the first then you might as well be the X-factor and as we are X, everyone will remember X.” With 394 names on the paper, dedicated below-the-line voters will need to start sharpening their pencils quick smart.

Cory crowdsourcing ideas. In this week’s missive from Cory Bernardi, the conservative Liberal Senator announced that entries are open for the annual essay competition of the Conservative Leadership Foundation. Bernardi started the CLF six years ago and — This year’s essay topic is “If I were Prime Minister I would …”. Well, what a loaded question — and the word limit is only 1500 words. We also wonder if this is some kind of policy crowdsourcing activity, perhaps entrants should be copyrighting their ideas. If you were wondering about the pedigree of the award, the IPA’s James Patterson spruiked it yesterday, saying that he was the inaugural winner. We look forward to reading the winning essay.

Distressing health survey. The government is currently undertaking the Australian Health Survey, in which participants are asked about the health and physical activity, but we hear that the way the questions are designed has been distressing for some participants:

“The Australian government’s health survey requires participants to answer questions regarding their physical exercise, e.g. ‘How many hours per day do you spend sitting?’ ‘How many hours per week do you spend standing?’ even if they have already identified (for example) being in a wheelchair. The questions CANNOT be skipped under any circumstances. The survey requires that ALL questions relating to physical activity be answered and in the specified order. This can be very distressing for participants. There are other sections that may be skipped, for example there are health questions that only apply to female participants. The survey, and the requirement that EVERYONE who participates be asked, and answer such questions sends a clear message that only able-bodied Australians have been considered in the construction of the survey. There is no debrief provided for any participant who has been adversely affected by the questions they have been asked. And numerous people have been adversely affected by taking this test.”

We asked the Australian Bureau of Statistics about the questions, and if boffins had considered people with disabilities when the questions were written, and were told by a spokesman:

“To ensure consistency of approach, interviewers are instructed to ask the interview questions exactly as written. In certain areas of the questionnaire however, interviewers are asked to use indirect and neutral prompts at their discretion, where the response given is, for example, inappropriate to the question asked or lacked sufficient detail necessary for classification and coding. This can occur particularly in relation to type of medical condition where interviewers are asked to prompt for a condition if a treatment or symptom was initially reported.”

We asked again if Australians with disabilities were considered in the framing of the questions, and were told:

“The questionnaire was designed to be administered using standard ABS procedures for conducting population interview surveys, with regard to the particular aims of the survey and the individual topics within it, and the methodological issues associated with those topics. Other factors considered in designing the questionnaire include the length of individual questions, the use of easily understood words and concepts, the number of subjects and overall length of the questionnaires, and the sensitivity of topics. Where appropriate, previous ABS questions on the topics covered were adopted.  Cognitive interviewing and testing is conducted on questions and topics in the survey.”

The feminists are coming. Where do you go when those pesky feminazis disempower you after you plagiarise an article about “male disempowerment”? The Spectator of course. Tanveer Ahmed, the psychiatrist, media commentator and former White Ribbon ambassador has written a piece titled “Lynched by the Femninist Mob”, in which Ahmed takes aim at the “treacherous, virulent, oestrogen laden waters of modern feminism”, who are to blame for all his problems:

“The White Ribbon site continued to be mobbed by posts demanding my resignation. Despite the group being about men, the hundreds of angry posts were entirely from women.”

At no point does he acknowledge that the words he was “lynched” over were plagiarised from the US political website Prospect and led to him being sacked as a columnist at The Australian. But maybe that’s the feminists’ fault as well?

Pratchett goes into the night. Fans of the fantasy novelist Terry Pratchett were saddened to learn of the news of his death from Alzheimer’s overnight. Pratchett’s death, at the age of 66, was announced by a series of tweets from his Twitter account: 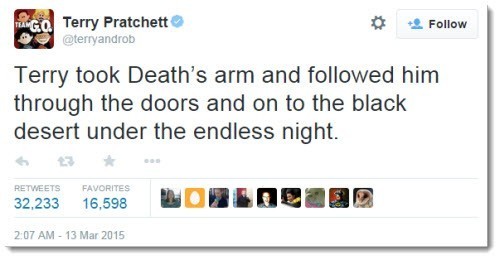 Productivity issues. We received this tip that job cuts at the Productivity Commission might not have been about productivity, but politics:

“A year ago the Productivity Commission made some senior executives redundant under the guise of ‘federal budget cuts’. Instead these cuts were motivated by politics — so much for ‘ speaking truth to power’. Less than a year on the Productivity Commission has received permission from the APSC to recruit several SES Roles, including one reporting directly to the Chairman, which of you believe the rumours, is already earmarked before a merit based process.”

We put the tip to the Productivity Commission, but didn’t hear back by deadline.

Leprechauns and Guinness. Prime Minister Tony Abbott has found a new group to offend this morning, the Irish. Yes, we didn’t expect it either. The Prime Minister recorded a video message to be played at the Irish Australian Chamber of Commerce in Melbourne and the Lansdowne Club in Sydney, where St Patrick’s Day business lunches are being held today that he couldn’t attend. In the video, Abbott swaps his blue tie for a green one, saying “this is the one day of the year when it’s good to be green”. The Irish Times is reporting that some Irish expats are offended by the generic nature of the video, in which Abbott says “It’s been said of us [Australia] that the English made the laws, the Scots made the money and the Irish made the songs”. Neither lunch will be playing the video. 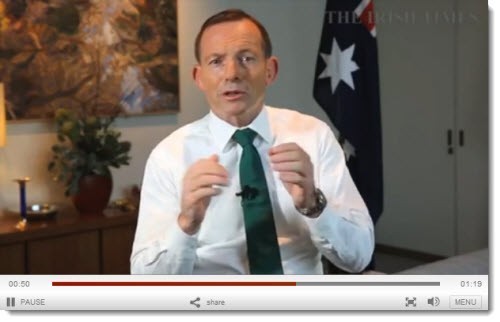 Are you sure that’s not really a new episode of “At home with Tone”? It looks more like a parody than a prime minister

Was it only two days ago I was pondering which minority group the PM would next offend? Job done, Mr Abbott.

I’m not Irish but I feel patronised on their behalf. We didn’t get that smarmy crap on St David’s Day. And for your information it’s the Cymraeg who really lift up their voices and sing. Whingeing Pom – what would he know?

Ghoulie Andrews is the Minister for Defence, Toady is Minister for Offence – he couldn’t trust anyone else with that.