Libertarian Senator David Leyonhjelm says radio stations air prank calls all the time. And other media tidbits of the day.

ACMA should drop 2Day FM investigation: Leyonhjelm. Liberal Democratic Party Senator David Leyonhjelm has called on ACMA to step back form ruling against 2Day FM, as the TV and radio lobbies last week call for the broadcast media regulator to have its wings clipped after a High Court ruling found it was within its rights to find 2Day FM broke the law in airing the royal prank call that was implicated in the death of a British nurse.

“My view is ACMA should say and do absolutely nothing,” he told Crikey earlier this week. “On the nurse who committed suicide in the UK, assuming she owns her own body and her own life, it was her choice to end her life. Suicide is always a tragedy, but it’s not someone else’s responsibility.

“I would encourage ACMA to shut up, leave the area alone, and stay away from what is a private domain.”

Radio stations air prank calls all the time, Leyonhjelm said, and the regulator shouldn’t be acting differently in this instance because somebody committed suicide. “How is anybody to know that somebody is feeling suicidal before they make the call? … The reality is they can’t possibly do that,” Leyonhjelm said.

He stopped short of indicating support for reducing ACMA’s powers, but did say he was sympathetic to claims made by the commercial media lobbies that ACMA was acting as “judge, jury and executioner”. “The rule of law holds that your accuser should not be your judge. ACMA’s not qualified … so they should keep their noses out of it.”

In a statement, Family First Senator Bob Day said he was supportive of debate about ACMA’s powers following the ruling. “We support deregulation and free markets, and to the extent that ACMA constrains those principles, we would support reform,” the South Australian Senator said.

But Greens Senator Scott Ludlam told Crikey ACMA has been accused for years of being toothless. “I find it a bit peculiar that the [radio and TV] industry is objecting to the idea that the regulator should have powers to regulate.” — Myriam Robin

If you or someone you know needs help, please contact Lifeline on 13 11 14. There is also an anonymous online chat service available between 8pm and 4am AEST at Lifeline.org.au.

ITV eyes Big Brother creator. ITV could end up paying US$1.17 billion to make the world’s most successful TV producer, John de Mol even richer. As forecast a week or so ago, ITV has done a deal to acquire 100% of Talpa Media B.V., the Netherlands-based production company of de Mol that’s behind reality shows The Voice, The Voice Kids, Utopia, I Love My Country and Dating In The Dark for US$530 million in cash.

That is considered an initial payment. The final price could go up to US$1.17 billion, contingent on Talpa hitting profit growth targets over the next eight years as well as de Mol staying with ITV/Talpa for that time. ITV said that, following the transaction, de Mol will continue to have a key role in format creation, working exclusively for Talpa alongside ITV Studios Managing Director Kevin Lygo and his team.

The pact gives ITV access to Talpa’s portfolio of formats. Talpa has created 75 shows airing in more than 180 countries, with 16 new formats broadcast last year. That includes The Voice, spinoff The Voice Kids, I Love My Country, Dating in the Dark, game shows Divided and Battle of the Sexes as well as social experiment Utopia, which is being made in multiple territories despite its brief American run.

According to the announcement from ITV, Talpa last year generated 233 million euros of revenue from productions, format fees and new revenue sources, delivering 61 million euros EBITDA. In the past five years under Adam Crozier as CEO, the company has bought a string of US and UK production companies, including Big Talk, The Garden and Leftfield Entertainment. Including the down-payment for Talpa, the cost would be close to US$3 billion. — Glenn Dyer

Front page(s) of the day. Good Weekend editor Ben Naparstek is billing this as The Good Wife star’s “most revealing interview yet” … 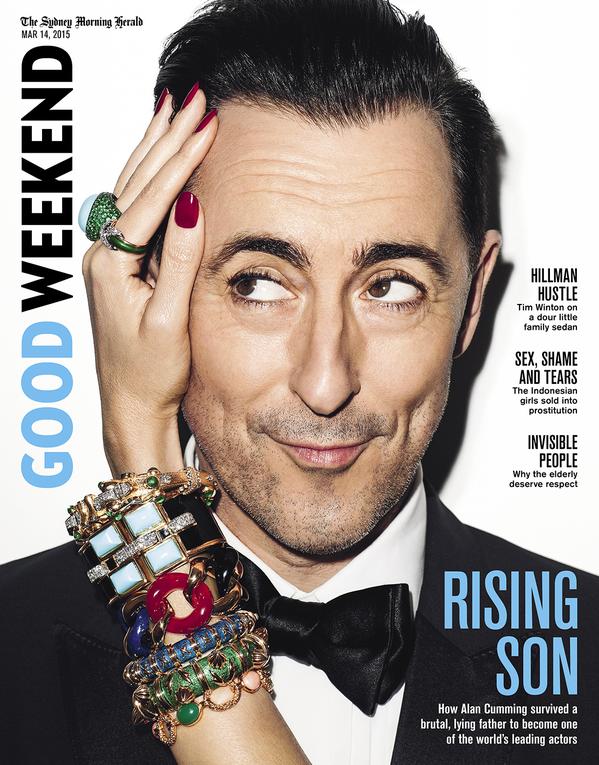 But really, our front page of the day was always going to be the Speccie …

Quote: “On the nurse who committed suicide in the UK, assuming she owns her own body and her own life, it was her choice to end her life. Suicide is always a tragedy, but it’s not someone else’s responsibility.”

Not relevant to the case he was commenting on, but the logical extension of that attitude, is that it absolves bullies of any responsibility for their actions, be it in the workplace, school or home. It’s a troubling attitude for someone in a leadership role.