Mayne: why Fairfax should walk away from 2GB merger

Fairfax should consider all the implications of a business merger before it jumps into bed with 2GB and John Singleton. 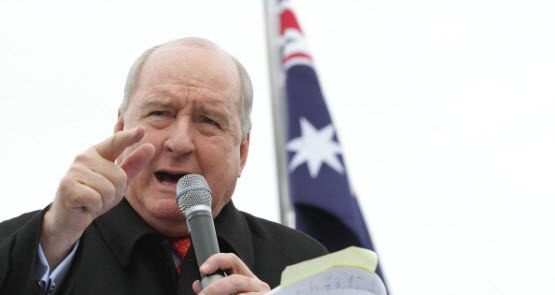 Are 2GB heavyweights Alan Jones and Ray Hadley getting stuck into Treasurer Joe Hockey for wasting all this time and money suing Fairfax Media? Not particularly.

If Hadley and Jones were seriously in favour of this controversial merger of the Macquarie and Fairfax radio businesses, they might indeed be weighing in on the side of Australia’s most venerable media company.

After all, Fairfax did Alan Jones a big favour in January, opening up its morning show on 4BC to allow the Parrot to prosecute his successful 10-hour anti-mining radio campaign to bring down then-Queensland premier Campbell Newman.

And how did current 2GB-controlling shareholder John Singleton respond to this situation? He laughed in the face of Fairfax, giving this interview to The Australian in late January when he mocked his marriage partner in the following terms: “He’s [Campbell Newman] suing Fairfax and that’s wonderful because we’re not a joint venture yet. It costs Fairfax money, not us,” he said.

“It’s bloody great. If it was a joint venture I might be a lot more worried. I thought ‘You beauty’.”

Given the way Jones and Hadley operate, there will probably be more defamation skeletons in the 2GB closet than across the wider network of Fairfax stations in Melbourne, Sydney, Brisbane and Perth. Is Singo providing a guarantee for any liability associated with all historical 2GB broadcasts up until the day the merger becomes effective? Besides, Campbell Newman is also personally suing Alan Jones, so wouldn’t his existing employment contract with Singleton cover this?

If Singo’s reckless public commentary isn’t reason enough for Fairfax to walk away from its proposed 2GB merger, the Roger Corbett-led board might like to consider a couple of other factors since the deal was announced on December 22.

Firstly, Fairfax should have been aggrieved when Macquarie Radio announced this profit downgrade on January 30. Macquarie Radio shares leapt to $1.30 after the merger deal was announced, but hit a low of $1.07 after the profit warning and are today trading at a miserable 96c.

This weak share price might reflect the fact that independent expert Grant Thornton estimated there was only $5-6 million in synergies to be achieved, far less than the bullish $10-15 million figure spruiked by Singleton’s camp.

And what about the Parrot’s great supporter, mining magnate Gina Rinehart? She sold her 15% stake in Fairfax for $306 million in early February, pocketing a profit while also easing the pressure on the Fairfax board to second guess the demands and desires of its largest shareholder.

Another factor is the potential defeat of the Baird government in NSW, which would in turn probably lead to the removal of Tony Abbott as Prime Minister. Part of 2GB’s halo comes from the access it gets to Abbott and his band of fellow travellers on the Right of the Liberal Party.

But if Communications Minister Malcolm Turnbull was suddenly PM, the Parrot would probably find himself locked out and off the drip, which would in turn have implications for ratings, revenue and prestige.

Culturally, there are also big challenges. Media Watch host Paul Barry pointed out some of the obvious contradictions and conflicts in the proposed radio merger last Monday night.

If all those cosy connections and cross-promotions between the Murdoch-controlled Daily Telegraph and 2GB are going to continue, what is the point of the merger?

The Parrot showed that he can campaign against right-wingers with the vicious attacks on billionaire New Hope Coal chair Robert Millner, so if the Fairfax merger is to proceed we should soon hear him launching into all things Murdoch. That would be worth listening to.

Interestingly, Fairfax didn’t even choose to make an ASX announcement when the 172-page explanatory memorandum on the deal was released by Macquarie Radio on February 24.

The vote takes place on March 25 in Sydney, and Singo is expected to vote his majority stake in favour and leave himself at the mercy of a company that would become majority-controlled by Fairfax. However, Singo is also proposing a constitutional amendment which guarantees himself a board seat, initially to be held by his son Jack Singleton, for three years. Fairfax is yet to indicate if it supports this proposal, or who it would appoint as its two representatives on the five-person board.

How Fairfax uses the power of owning 54.5% of an expanded Macquarie Radio will be a very interesting question, as we explored in this Crikey story back in January.

Personally, I reckon Fairfax would be better off terminating the merger and going it alone, or until such time as a new deal is cut on less favourable terms for those angry old men at Macquarie Radio.

Giving the Singleton camp a 45.5% stake in a national talk-radio business is just too big a valuation for 2GB, which is overly dependent on the ageing and volatile shock jock Alan Jones.

I really don’t know how much Jones had in the demise of the LNP’ in Queensland election, they did a pretty good hatchet job on themselves, even if they (the LNP) can’t accept their own faults.

I wonder if my existing subscription to the venerable old Faifax will give me the opportunity to stream Alan’s screaming rants? I’m really curious about his manoeuvres. I think he’s been trying to shore up a bit of “green” cred with his anti-fracking stance in preparation for his pro-nuclear stance (he was always one of the nuke lobby’s louder voices). The proposed land clearances and eviction of Indigenous communities are obvious preparations for the coming all-out push.
Isn’t that good business sense? Fairfax behaving like Bolsheviks in Melbourne and Menshiviks in Sydney?

Fairfax’s Sydney Tabliod and former broadsheet the S.M.H. has some time ago added the words “Independant Always ” to it’s masthead.
These days that is as true as Fox News U.S.A.’s claim to be “Fair and Unbiased”. (Kate McLymont AND Michael West being the exceptions).

As Mayne says, it certainly sounds like a dubios deal for Fairfax and I feel a poor result for media in OZ.

The exceptions in Fairfax, none apply to FAUX News.