Andrew "Twiggy" Forrest's Fortescue Metals Group will need to move soon if it's to avoid serious financial strife caused by the ongoing downturn in the global iron ore market. 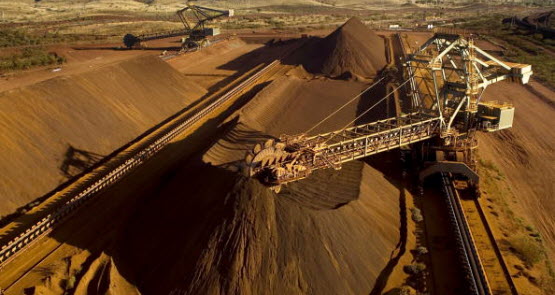 The world of Fortescue Metals Group can be a strange place. It is seeing to raise $2.3 billion in debt at a time when the market for its only product (i.e. iron ore) is at its worst ebb for six years. Yet, the company is brightly characterising this as business as usual, so it’s little wonder that the FMG shares fell below $2 this week and look set to stay there for some time.

There are many questions buzzing around the market. Is this just the first piece of major balance-sheet restructuring, designed to protect the company against lower iron ore prices for a longer period of time? Is it the dusting off of plans for asset sales? Is there another agenda at play?

Crikey put these questions to the company, but it won’t say anything more until (or if) the fundraising is complete. So people still holding its shares will also be holding their collective breath because FMG is a single-product, single-market company — that’s a big bet when the product is in oversupply and the market is in strife, possibly deep strife.

The price of iron ore continued its precipitous fall, and last night closed at US$57.90 for the benchmark Dalian Fe:62% (a grade of iron ore) — a level the more bearish analysts are predicting will be its average price for the year. It has further to fall, probably to US$50 per tonne; and probably soon, as supplies continue to flood the market. Iron ore was always going to fall again after Chinese New Year, following a very limited restock by China’s steel mills, which are continuing to produce steel at a rate far in excess of what its home market needs. Port stocks, which had begun to come off their record highs of 100 million tonnes-plus late last year, are rising once again.

FMG wants to the money to buy back some of the bonds that comprise about 40% of its debt. Those bonds are due to be paid in 2017 and 2018. It wants to replace them with debt due well into the future. It’s a sensible, possibly necessary move — if it can pull it off.

FMG’s bonds are costing the company between 6.88% and 8.25% in interest payments and are more expensive than its average bank debt, which is about 4%. A company of FMG’s size, in good shape, should be able to borrow at about 3% in the United States, where interest rates are lower than Australia. Borrowing in the US also makes sense for the company as iron ore is traded in US dollars (although some payments are now being made in Chinese renminbi yuan) and Australian market types right now have very little interest in handing our loans to the mining sector, with iron ore miners more on the nose than the rest. But FMG is facing the imminent prospect of its $1.6 billion in cash reserves beginning to deteriorate when the price hits about US$55 per tonne, according to Tim Murray, the managing partner of J Capital Research.

Murray, like other analysts, has to make a best estimate because FMG won’t tell the market. FMG insists on using meaningless at-mine “cash costs”, measured in wet metric tonnes. These bear little relation to FMG’s total, or “all in”, costs. Crikey wonders how mining “costs” are not “all in” as they would be for any other price for sale. “Cash costs” exclude interest, shipping and a sharp discount to benchmark price for lower-quality ore — FMG’s discount moves between 10-14%. Perhaps the company has confused itself.

FMG clearly did not see the collapse in its share price coming last year. The company took particular umbrage at research reports Murray issued last year, which predicted that the company’s shares would hit US$1.68. When I raised Murray’s price targets with people at FMG at the time, they noted that no one else in the market — people they referred to as “credible analysts” — had such a target, implying perhaps that Murray was not credible. But the market has spoken, and it says Murray is worth listening to. The reason for this is not so much that he got FMG’s trajectory absolutely spot on, unlike all the other more “credible analysts” (and this is not to dismiss all of them, because many of them are very good) whom the experts in the strange world of FMG listened to. It’s because he based his forecasts on the hard grind of on-the-ground research. Murray and his colleagues visited Chinese steel mills, traders, iron ore mines and the property companies that have underpinned the commodities price for so long but that are now in a whole world of pain. They have long had bearish views on the Chinese economy — again they are fast being proven right.

Murray has his own take on some further potential problems ahead for FMG.

He notes, in a recent research note, that FMG’s  prepayments for the first half of the 2015 financial year hit US$1.2 billion, up 20% on the half:

During FMG’s last refinancing in 2012, it started a process of asset sales. The first on the block — but later pulled as the iron ore price headed north again — was its port and rail assets. But they are not worth the billions they once were, with no junior miners now in a position to use them, and FMG itself unable to make the contractual commitments that pumped the asset value up in the first place. The only real option left is to sell down significant parts of individual mines to joint-venture partners. Could any be game enough to suggest something Forrest would baulk at, and which could be seen as the begin of a break-up of the company?

Whatever the case, it’s certainly not business as usual for the company chairman, its founder and major shareholder, Andrew Forrest, to be leading a fund-raising — that is the job of the chief executive and/or chief financial officer.

Forrest stepped down as CEO in 2011 in favour of Nev Power, who, together with CFO Stephen Pearce, has done a terrific job of lowering the company’s costs and repairing its ailing balance sheet.

But when the company is facing an emergency — as it will very shortly unless something remarkable happens — and if Murray is again right about the company, it will be an even bigger emergency. It’s Forrest who steps in, as he did in 2012, when the iron ore price last plunged, donning his perennially optimistic rainmaker’s garb to front bankers. Despite the insouciance the company is displaying, this will be the biggest test Forrest has faced since the early days of FMG.

So will the company succeed in raising all the funds? We won’t know for a few weeks, but a range of market insiders that Crikey has spoken to are sceptical that it will be able to secure financing while significantly lowering its interest payments. The next couple of weeks will prove very telling for one of Australia’s most remarkable recent success stories — one that is now mining on very shaky ground.