Brain snap or thought bubble? Western Australian Premier Colin Barnett has labelled Prime Minister Tony Abbott’s “lifestyle choice” comment on indigenous communities an “unfortunate choice of words”, but we hear from a tipster that what looks like a brain fart could actually be a window into what the PM plans to do with native title legislation:

“I suspect there’s a bit more to the apparent gaffe than meets the eye. Below is the relevant extract from the speech Tim Wilson, the Abbott-appointed Human Rights Commissioner, gave at the National Press Club on February 18. At the time, the media were more interested in 18C, so this part of the speech went unreported. But reading between the lines — to my mind at least — Wilson’s pitch on property looks awfully like clever clogs code for: ‘Let’s change the Native Title legislation so that graziers and developers can buy or lease the best bits of Aboriginal-controlled land’.”

Wilson devoted a large section of his speech to the issue of native title, arguing that Aboriginal people wanted “constructive reform to set native title free” and announced a “high-level forum” on the issue to take place later this year:

“We can’t complain about the cost of welfare programs for Australia’s first citizens, when we concurrently deny them the freedom to use the primary asset they own to escape dependency. It is not our place to tell Aboriginal Australia how to use their land. But it is our duty to ensure they can by removing red tape. Reform requires: flexible legal instruments enabling communities to use their title as they see fit, including with different ownership structures that meet their needs; complementary new business models that ensure finance can be raised, and risk can be priced, so communities can build economic opportunities; mechanisms to raise finance for the development of housing and ownership.”

We’ll be watching the results of the forum closely.

Savva grabs and misses. The Australian’s Niki Savva has tapped into a rich vein of anti-Peta Credlin fury within the Liberal Party. Every week brings some new revelation of discontent about the Prime Minister’s chief of staff, who seems to be a strange combination of the Prince of Darkness and leader of the Keystone Cops, while, conversely, Savva has nothing but admiration for that down-to-earth, butt-slapping top sort Julie Bishop, who just happens to be Credlin’s bete noir. But presumably in order to fulfil some contractual requirement with her employers, each of these dips into Liberal disunity contain an often tangential slap at Labor near the end, often with minimal effort to connect it with the actual point of the piece. Today, Savva devotes an entire piece to a forensic analysis of a Credlin email to Senate president Stephen Parry — a man beloved by all, to hear Savva tell it — that may or may not have been an implied threat. It’s fairly thin stuff, but near the end Savva shoehorns in  the obligatory swipe at Labor, saying it took Labor “days” to attack Joe Hockey’s superannuation brain fart “and then only after Paul Keating led them to it”. Errrrr … Not quite, Niki — if you go read the article in which Hockey first said super could be used for housing, there’s Chris Bowen bagging “this latest Hockey thought bubble” and pointing out that Mathias Cormann had attacked the idea last year. Bowen and colleague Andrew Leigh have been regularly attacking it ever since. Maybe the shadow treasurer needs to go out and slap some colleagues on the bum in order to get Savva’s attention.

Hot dog formula off. While Melburnian sport lovers have been celebrating the lowering of food prices at the MCG for this year’s footy season, it seems the savings will be  rubbed out by the hike in prices at this weekend’s Formula One Grand Prix. A caller to 3AW says that a hot dog at the Albert Park race track will cost $8.30, with sauce costing an extra dollar. While this seems like even more of an injustice than Daniel Ricciardo’s disqualification last year, we remind the powers that be in Formula One that former PM Julia Gillard has advocated for free sauce with pies, as does Crikey. A tipster tells us that the crowd looks small at the track today, and we are wondering where the Victorian government’s millions in subsidies is going, if not to affordable hot dogs?

Ha ha, you’re unemployed. A small, but nonetheless telling, demonstration of how nanny statism can have real-world consequences this week. The Twitter account for the aggressive federal government-owned anti-alcohol lobby group Foundation for Alcohol Research and Education last week tweeted from the NSW ACT Alcohol Policy Alliance election forum that “Kings Cross resident says ‘the lockout laws are changing lives'”. Those lockout laws are the ones that have done nothing to change the downward trajectory of assaults in Sydney, as the graph below shows, and the laws simply encouraged drinkers to go elsewhere, but hey we all love a bit of “anecdata”. 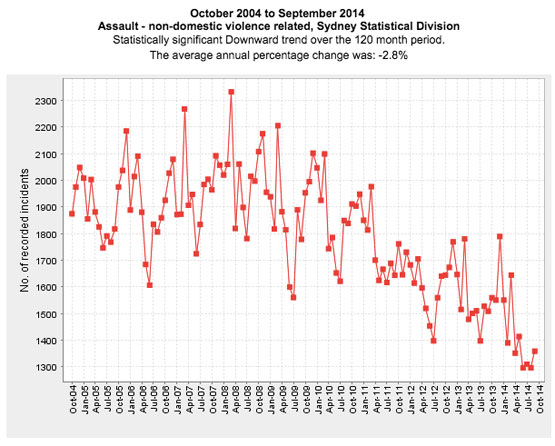 One Kings Cross venue owner this week responded, noting the venue had had to sack 15 staff as a result of the laws. FARE’s response? “can’t make an omelette without breaking an egg!” Interesting position for a government-owned public health lobby group to dismiss job losses as simply broken eggs in the making of the great wowser omelette. Perhaps the Commonwealth Health Department might examine why taxpayers’ money is being used to mock the loss of livelihoods?

Pussies galore. Partly because we missed the opportunity yesterday, and partly because we can’t publish this photo of Senator David Leyonhjelm’s cat Oliver often enough, a few tipsters have admonished us for not referencing the feline’s likeness to that of Ernst Stavro Blofeld’s kitty. Whether that makes Leyonhjelm a villain, we will leave up to you. 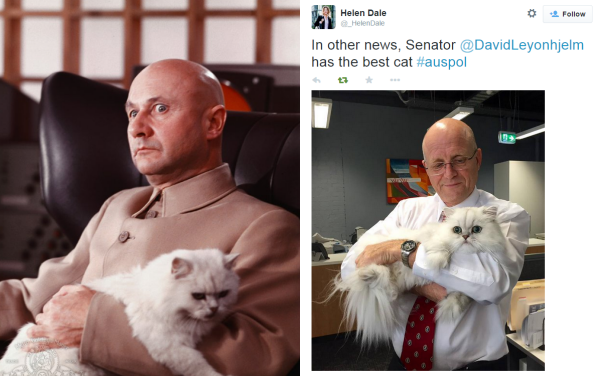 An apology to David Leyonhjelm

That has been the official plan on Native Title for a while now. Warren Mundine was spruiking it a few years back. http://www.naccho.org.au/download/media-press-releases/2013-08%20Media%20Warren%20Mundine%20Speech-to-Garma-Festival%20August%202013.pdf He compares Native Title to Communism.

Re the Grand Prix – I guess they have to make the food expensive to try and claw back some of the cost. Its quite remarkable that while the MCG can produce a crowd figure at each football match by 3/4 time, we never get the crowd figures for the GP.

Savva’a m.o is that of the conservative troll-hounds of News Limited all over, isn’t it?
[“No matter how bad things are for the Coal-ition – things are always worse for Labor!”?]
Now that things are going so badly for their Limited News Party – that Toady Abbott and the rest of his knot are the object of open self-inflicted derision and ridicule – Limited News can jump on the band-wagon and pretend that’s a sign of their “impartiality”?
But it’s not.
[Because when Labor is in similar dire straits, Murdoch’s conservative PR resources are never devoted to drawing similar punter attention to the same sort of comparisons in their Limited News Party?]