Abbott has again decided to kick an institution many Australians strongly support -- dubious as the United Nations may be ... 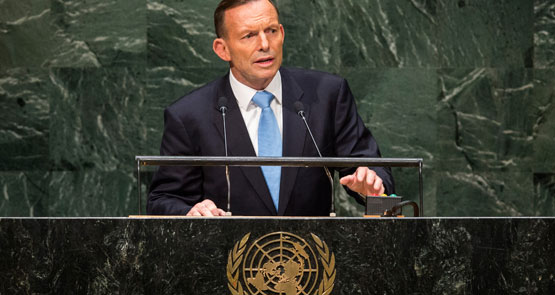 To be a reporter on cultural matters last decade was to be made to endure an awful lot of what was then called “burlesque”. In writing for The Age on performance, I saw hours of striptease whose crude intellectualism did little to convince me that there was anything that was special about this micro-art or really much that separated it from the sort of thing one might see at a Spearmint Rhino. But the chiefly female performers who saw mild profit from this mini-boom in new smut were exceptionless in their belief that theirs was a more “real” and effective kind of femininity that would probably change things for the better.

While it was true that some of the women were slightly less conventionally constructed in their attractiveness than the bottle-blondes installed on the poles of Kings Cross, it was not true that they were challenging — as they said they were, and as audiences believed them to be — the fundamentally corrupt and unequal expectations of gender. The way to undo the problem of women as chiefly visual objects was not, I thought, by providing us with more women as visual objects. The women might have changed a bit, but the structure on which they were operating — a stage — remained.

I was left, much of the time, with the sensation of having pressed a placebo button at the traffic lights of feminism. The sequence of things was not actually interrupted by the temporary delusion of power. All we got, in the end, was a gratifying charge and a means to go on tolerating things, unequal as they are. It’s just that now, we could feel a little better about it.

Knowing that sometimes people needed to feel better about the horrors of the world, my editor eventually stripped me of striptease duties. Anyhow, there are only so many ways you can point out the difference between rhetoric and reality. The rhetoric was one of “real beauty” and “empowerment” and “equality”. The reality was that tits, and the women to which they were attached, were right back where they had always been.

But, as my editor said, sometimes people can’t be talked out of the illusion of justice in action. Sometimes, they just need to believe it. In prosperous liberal democracies, liberal institutions, like the arts or, say, the Human Rights Commission, have the function of helping us believe that we are mostly just and that when we are not just, there is some meaningful recourse. The organs of liberal justice are very important to us even if, as in the case of many royal commissions or “liberated” striptease, they deliver very little. We need to believe in them and in Australia, our faith is almost excessive.

In a Pew Research paper, for example, cited by Australian National University, found our faith in the United Nations ranks highest in the world. We’re more iffy about the World Health Organization and the World Bank, it’s true, and our love for the UN may have been influenced by the fact that we had, at the time of the survey, just been offered our wild card seat at the Security Council. Still, we tend to respect the most ostentatious defenders of liberalism more than most nations, and this may explain our peculiar fascination for Eurovision, an institution itself seen as a cultural antidote to the Cold War.

Ours is a compulsively liberal nation where belief in “representation” far exceeds faith in real policy and our great civic arguments are often centred on the way things are spoken about than the way that things are done. Take, for example, the recent horror at Abbott’s comments about “lifestyle choices” to recast those Australians living in impoverished and remote communities as the selfish, idle rich. Since before his election, Abbott has been very clear in print about his policies for Aboriginal affairs and certainly this view, presaged in his 2009 book Battlelines, should come as no surprise. But his fault was not to continue the cultural genocide by means of brutal assimilation of which he had given us ample warning. His fault was to describe it illiberally.

Abbott, of course, is notoriously and purposely illiberal in his speech, and this holds great appeal, I imagine, for that small percentage of voters whose revulsion for “word above deed” is the right-wing flipside of my own. But I do wonder how long his “stuff the liberal symbolism” approach will continue to work in a nation that has evolved these past two centuries the ex-con’s ineluctable love of the system.

Very few Australians dislike the UN, yet Abbott has this week yelled at it for its “lecturing”. He did the same with the Human Rights Commission and failed, I think, to do as Howard had so successfully done by making himself appear authentic and manly against what he painted as the bleeding-heart excesses of the Left. Brandis and Abbott were clumsy enough that Human Rights Commission president Gillian Triggs looked sweet, fragile and noble in Senate estimates. These qualities, thrown into relief by the illiberal brutality of Brandis, did the one thing the Coalition had hoped it wouldn’t: remind us of the tortured children Triggs had attempted to defend.

Nationalism is a powerful ideology, and there are a few Australians who probably love the idea of Abbott standing up to World Government. But this Putin-shtick will end in Abbott looking as ridiculous to the electorate as a bare-chested man in karate pants on top of a horse. If he keeps trashing liberal institutions, he will ultimately find himself in our excessively liberal nation on the trash heap.

Of course, the UN is, by one reading, total bullshit. It could be seen as a ruthless, realist organisation masquerading as a liberal one. Most of its office floors are given over to maintaining the interests of the powerful, and we could quit funding those who purport to support the disenfranchised and see very little difference in the world. Churchill, a great prick but an honest one, said of the plans for world government that it must be entrusted to powerful nations for “if it were in the hands of hungry nations, there would always be danger”. And so long as the Big Five maintain veto power on the Security Council, there will be no “danger”, by which we mean legitimate justice.

Still, Australians and young Australians in particular believe the liberal rhetoric. They seem unaware that the UN was unable to meaningfully act in the post-Cold War era of “ethnic cleansing”, that all flavours of Australian government routinely ignore its recommendations or, indeed, that it gave the world the dubious gift of Israel. Thought leader and “nude activist” Caitlin Stasey recently called upon the UN to save the animals at a zoo in Gaza based on her reading of an article in the Daily Mail. Perhaps Emma Watson’s speech to the General Assembly has been so lavishly shared that younger people now believe that a visit to the same organisation that gives veto power to the US — and has done little for Palestine but help erase it from the map and make its powerless citizens refugees — can be relied upon to airlift Arab tigers to safety.

The young cannot be blamed, though, for their complicity with the idea of an effective, liberal big Other. But Tony Abbott can certainly be critiqued for his strategic failure to comply with a myth still functionally powerful for most Australians. His act of “revelation” and of, apparently, taking the fancy dress of liberalism off in public is an insincere as any burlesque. And, like burlesque that purports to be more “real”, it is something of which people will eventually tire.

Just because you perform taking your clothes off doesn’t mean you are disclosing any truth. Tony Abbott is not sincerely naked. He’s just a very bad stripper who needs a new routine if he is to survive.

Great article Helen, I think your analysis really explains Tony’s current “shtick” and how it will most likely play out

The idea of Abbott as a stripper is causing me acute mental harm.

I am now scarred for life

@cave, I am grateful for your gratitude. @The Pav, I can only say that I am very sorry!

an apology…Thank you but you must be aware that “torture” is not a basis for giving an apology. Just ask Mr Hicks!

Dear Helen,
That was a great article. It is somehow bizarrely encouraging for those of us who keep on critiquing and pushing for change.