The ABC didn't put specific allegations to MyBudget before airing them on 7.30, the Australian Communications and Media Authority has found. And other media tidbits of the day.

7.30 in breach. The Australian Communications and Media Authority has found the ABC’s 7.30 program in breach of the ABC Code of Practice, after a segment aired in December 2013 on the rise of commercial debt-management firms carried allegations of impropriety and negligence without giving the company they involved a fair opportunity to respond.

MyBudget complained to ACMA, saying the segment contained “inaccuracies”, demonstrated “a lack of impartiality” by relying on the views of two former clients without giving MyBudget a chance to respond to their allegations, and contained specific allegations MyBudget was not invited to respond to before broadcast. MyBudget also complained that an interview conducted with its founder Tammy May was deceitful, as she was “not informed of the general nature of her participation in the interview prior to attending” — which the company said was a breach of the fair and honest dealing provisions in the ABC code.

ACMA upheld the aspect of the complaint dealing with MyBudget not having been given an opportunity to respond to specific allegations against it; allegations which accused it of mismanaging the finances of some of its former clients. The ABC argued that its reporter asked May general questions about profiteering and mismanagement, which were at the heart of the claims made by the clients (which the ABC had yet to interview when it spoke to May). ACMA however said several specific allegations about MyBudget’s financial management practices should have been put to the company before the segment aired:

“It is true Ms May was given an opportunity to respond to general or ‘high level’ criticism concerning MyBudget’s approach to managing debt repayments, alleged high fees, profiting from people in financial distress, and the prioritisation of payments. It is also true that there was no misrepresentation of Ms May’s response to the matters put to her. It was clear that, at a ‘general level’, Ms May did not accept that there were problems with My Budget’s service delivery,” the investigation report reads.

“However, the allegations made by [the two clients] were different. They were client-specific allegations of mismanagement of repayments, lack of communication about payments, and neglecting to negotiate with creditors … Regardless of whether Ms May had intimate knowledge of their cases, she was not made aware of these specific allegations prior to the broadcast and MyBudget was not given an opportunity to respond to them.

“In this case the ABC made initial contact with MyBudget for the purpose of the interview in November 2013 and Ms May was interviewed later that month. The program was broadcast on 9 December 2013. This chronology suggests there was time, prior to the program being finalised and broadcast, to put … specific allegations to My Budget.”

ACMA did not uphold the complaint about the interview with May, as the ABC’s approach to her told her there may be other questions asked of her in addition to the general ones first put in the interview request. The fair and honest dealing provision, ACMA noted, did not mean the ABC had to inform interviewees of every question a reporter might ask them during an interview. Further complaints, about impartiality, were not upheld by ACMA, which found 7.30 did not favour the views of the clients over that of May and MyBudget.

The ABC said it would add a note on the breach on its Corrections and Clarifications page. A spokesperson told Crikey that the ABC “vigorously defended” its reporting on the story, but accepted ACMA’s finding.

The spokesperson said: “It is always a matter of judgement on how much information is provided to people who are being asked to respond to allegations. The judgement from the ACMA was that, while we did provide information and an opportunity to respond, it was not enough and we should have given them more specific information. We take these matters seriously and the 7.30 team will go through the judgement and look at the lessons learned.” — Myriam Robin

Clarkson’s fracas ripples throughout the industry. More than 600,000 people have signed an online petition (started by UK political blogger Guido Fawkes) to return Jeremy Clarkson to Top Gear. Clarkson has been suspended following claims he hit a producer on the program. The BBC has pulled two of the final three episodes of Top Gear in the current series in response to the suspension of Clarkson. But the BBC has not only lost revenue from the episodes being pulled, it has opened itself up to compensation claims from foreign broadcasters (such as Foxtel in Australia) for non-performance of a program-supply contract.

But is the suspension a case of the BBC shooting itself in the foot (and in the cash register)? UK reports say Clarkson is out of contract at the end of this month, so the suspension won’t mean a thing. In fact, The Guardian and other media outlets say the BBC had been hoping to wrap up new three-year contracts with the program’s hosts — Clarkson, Richard Hammond and James May. Those talks are now reported to be off.

The fate of the third episode of the current series is up in the air and the BBC is now trying to fill the gap of the two dropped episodes by offering broadcasters fresh (but old) Top Gear material. Both ITV and Channel 4 have tried to poach Clarkson from the BBC in the past and his departure would spark a huge bidding war among the corporation’s UK commercial rivals, including pay-TV groups such as Sky, Virgin and BT.

Top Gear is shown in 214 “territories” (not necessarily countries in all cases). It has an estimated 350 million viewers around the world. The BBC arm, BBC Worldwide, makes (reported by UK media) 50 million pounds a year from the program ($A100 million) from revenues estimated at 150 million pounds (around $A300 million).

The fastest growing area of income for the BBC has been the live shows. The next of these is a now sold-out Top Gear Live event in Stavanger in Norway, due to be held on March 27 and 28. If Clarkson is not available, it will not be what has been advertised. The live tour, which is a joint venture between BBC Worldwide and a company called Brand Events, will have to be cancelled if Clarkson isn’t there (and contracted), costing BBC Worldwide an unknown amount of money. Merde! — Glenn Dyer

Bid for Ten takes a turn. If anyone hadn’t noticed this morning, both Fairfax Media and The Australian got the same drop about a change in the bid from Discovery and Foxtel for the ailing Ten Network. Both reports say the price is less than the first mooted offer of 23 cents a share. But now, rather than for all of the company, it’s to buy the company’s TV operations which will only need a 51% yes vote from voting shareholders, instead of a much higher threshold.

So what would the shareholders want?

Well, Lachie Murdoch and his bestie, James Packer, want out of their combined stake of around 18% or so, and Gina Rinehart also wants to exit her stake of around 10%. So, such a proposal would have a head start if the offer involves buying out shareholders. But it seems to be trying to avoid that. Bruce Gordon, who controls around 14.9%, doesn’t want to sell. Foxtel and Discovery would leave behind the listed company and its $200 million revolving credit with the Commonwealth Bank (though selling the operations might cause the CBA object to the deal). Investors in the listed company might not be very happy at being stuck in the shell of a near-failed media company. Independent directors in Ten are reported to have already expressed scepticism about this type of deal. This one is dead in the water if any offer doesn’t allow all shareholders to sell their shares. Ten shares were untraded in the first minutes of trading this morning at 23.5 cents. After sitting on 24 cents for five days, they fell to 23 cents on Tuesday and then regained half a cent on Wednesday. — Glenn Dyer

Front page of the day. Two days ago, the UK Tories launched a new Saatchi ad featuring Ed Miliband in the literal pocket of SNP leader Alex Salmond. The Daily Tele seems to have had a similar idea … 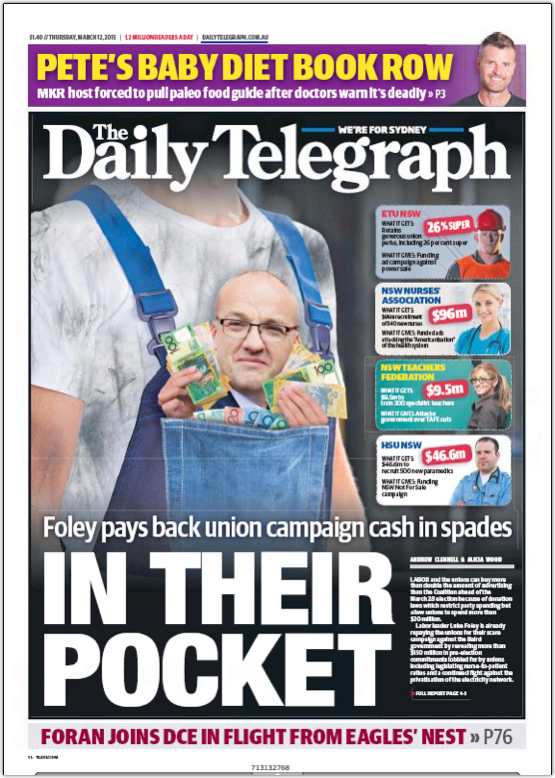