Malcolm Turnbull's critique of the government's flaws is self-serving and plainly wrong. 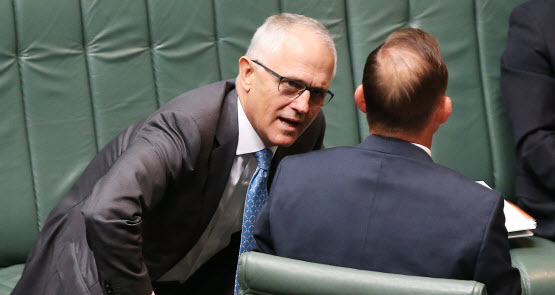 His name is Malcolm, he’s from Sydney and he’s here to help. You may think he’s just Communications Minister, but he’s happy to roam all over other portfolios, including the Treasury, offering public advice about how the rest of the government can do its job better — more like him. And there he was in Brisbane yesterday, again offering his diagnosis of what ails the Coalition when it comes to economic management.

Turnbull’s prescription is full of common sense: identify the problems you are trying to fix for the public first before you offer solutions, engage the electorate in a discussion of ways to fix them, and identify and if possible assist any losers from the solutions. There’s nothing new in his analysis, but nothing wrong either.

Only problem is, Turnbull’s application of such common sense to the government’s 2014 budget woes is completely wrong. He argues:

“The more fundamental problem the 2014-15 budget faced was that the public was not persuaded tough measures were necessary in the first place. We — and I include myself and every member of the Government in this criticism — did not do a good enough job in explaining the scale of the fiscal problem the nation faces, and the urgency of taking corrective action.”

Turnbull does admit there was a “deeply felt sense” among voters that the budget as a whole was “unfair to people on lower incomes”. But he doesn’t discuss that — nor could he, given the alternatives are to either say voters were wrong to feel that way, or that the budget was indeed unfair. Instead, for Turnbull, “[i]n my view the failure to effectively make the case for budget repair was our biggest misstep, because it was a threshold we never crossed”.

In November 2013, Essential Report showed 65% of voters believed it was important for the country for the budget to be in surplus. Some 52% said a surplus was important for them personally. And while those numbers were down slightly on February 2013, they were at the point when the government was starting to ramp up its debt and deficits rhetoric, including a highly misleading campaign to portray the independent Pre-election Fiscal and Economic Outlook from Treasury and Finance as not giving a true picture of the nation’s finances.

And go forward six months to the budget: in the week after the budget, 56% of voters agreed there was a “budget emergency”, compared to 32% who didn’t. That included 39% of Labor voters and 41% of Greens voters who believed there was a budget emergency. And that was despite the fact that voters understood that Australia had a lower level of debt than other countries.

Far from not being persuaded tough measures were necessary, as Turnbull says, in fact a majority of voters accepted the Coalition’s “budget emergency” rhetoric, even many Labor and Greens voters, and they had a nuanced understanding of the problem — they understood that Australia did not face the same fiscal challenges as other countries, but nonetheless needed to take action.

The problem was, the government wasted this opportunity by proposing budget measures that were seen as wrong-headed. Either the budget measures themselves weren’t seen as fixing the deficit, or they were targeted at low- and middle-income earners when voters believed high-income earners and companies should have been shouldering more of the burden.

It’s a self-serving narrative from Turnbull, and it becomes even more so when his thoughts turn to examples of how to do it property — which just happen to be in his own portfolio: NBN and Australia Post. That’s the NBN that is now discredited as a strings-and-cups operation in which taxpayers have gifted Telstra billions for its ancient copper network, and the Australia Post reforms for more expensive, significantly poorer services that came out of nowhere the other week. And no mention by Malcolm of slashing ABC and SBS funding, which voters recognised as a broken promise regardless of Turnbull’s efforts to pave the way with an “efficiency review”.

“At least we have learned our lesson,” said Turnbull. “The intergenerational report released last week by Joe Hockey provides a solid platform from which to reboot the budget debate, and educate the public about the need for action.”

That would be the intergenerational report that has dropped from view beneath Joe Hockey’s stupidity about using super for housing — which Turnbull criticised — the government’s ridiculous backflip on automotive assistance, Tony Abbott’s “lifestyle choice” comments and Hockey earning headlines not for his 40-year fiscal vision but what he said in court in his action against Fairfax. And, now, Turnbull’s own desire to make sure his colleagues know that he thinks he can do a better job than either Hockey or his hapless leader.

My take on Turnbull’s comments is that he is trying to walk a fine line between toeing the party line and saying what he really thinks. The party line seems to be that mistakes were made but all Abbott and Hockey have conceded is that they did a poor sales job. That says to me that they still like all the policies that they have ditched. Turnbull is saying as diplomatically as possibly that he doesn’t agree.

What sort of a presumptuous arrogant twat is Turdbull?
What’s his form like – besides being indulged by the ABC, allowed on, to ask his own questions and generally to play various “presenters” like tin -whistles?
This is the Chicken Little goose that took to Utegate like a fly to a turd; that (as Howard’s “Minister for Silly Buggers”) gave 10million of our $tax to Aust; Rain Corp; a company chaired and half-owned by a Murdoch nephew – who also just happened to be member of the “Wentworth Forum(?)”, a cabal that raises money to fun “St Malcolm’s” re-election war-chest?

So Turnbull is lining up with the rest of the LNP who still don’t get that the budget is a crock. They keep pushing the “poor marketing” line in the hope that we fools will just knuckle under and believe their crap.

Well here’s the thing, Joe: You can’t market a turd!

And speaking of poor Joe, he was struggling on Lateline trying to justify screwing people out of their super and contradicted himself – first he said that taking super to buy a house was good then he said that because we will be living longer, we will need more super! WTF – which is it Joe – and you are supposed to be the numbers man – FFS!

It would seem that Turnbull the rest of his party just don’t get it.

1) The budget was not tough it was simply unfair
2) There was no sensible meaningful reform
3) It was a sloppy bit of work compromised by ideologies that have been a proven failure
4) Australians will take and accept strong measures but they are not that stupid that they can’t see a steaming pile of [email protected] for what it is.

@Gerryod, RE: Hockey on Lateline. As if Tony Jones didn’t make a point about the super guarantee rate freeze given the inter generational reports findings on life expectancy. When someone leaves doors like that wide open, they deserve to have them slammed in their face!