Who is a friend of Joe? Today is the third day of Treasurer Joe Hockey’s defamation trial against Fairfax papers, where he has taken issue with the Fairfax reports last year that ran with the headline “Treasurer for sale” and detailed his connection to the Sydney business group the North Sydney Forum. The stories alleged that the forum acted as a way to buy access to Hockey, a claim that he disputes. A tipster has pointed us to the North Sydney Forum’s entry on the Australian Business Registry, where the names “Friends of Joe” and “Friends of Joe Hockey” were also registered in January last year. As far as we can tell, the North Sydney Forum has never used the name, but “Friends of Joe” is also used on Hockey’s website to encourage people to sign up to support him. 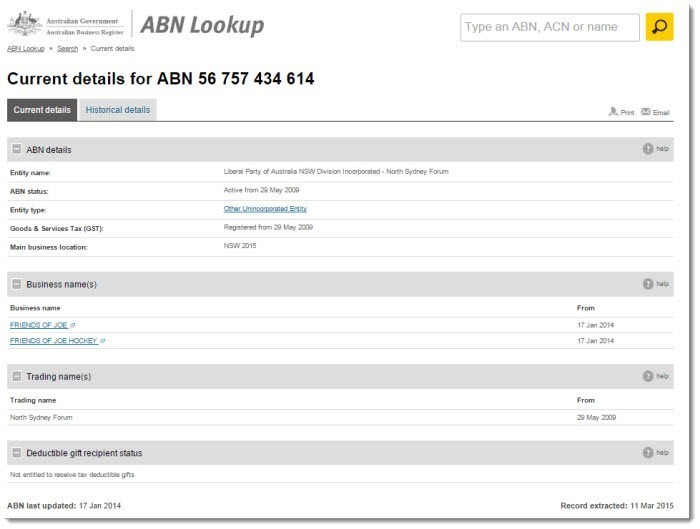 Keep your friends close … It’s only just over two weeks until the NSW election, and while it seems a done deal for Mike Baird and the Liberals, one tipster has noticed that the government isn’t relying on a traditional ally to get over the line:

“It appears there has been a fairly strong move over the last couple of months on the part of the Prime Minister’s and NSW Premier’s and opposition leader’s offices away from providing ‘drops’ exclusively to News Corp papers. Fairfax has been receiving a steady flow of fairly significant drops, a noticeable change from recent times. The latest example was Baird’s power price bills announcement in The Sun Herald — the sort of policy that would normally have made its way to Tele journalists. It seems there has been a sensible strategy change following recent state election results and the continued poor polling of the Abbott government. All have highlighted the growing electoral impotence of the Murdoch press in recent times. It appears strategists have realised the importance of getting all media outlets onside. Having News Corp as a government’s only champion is no longer enough in the current media world. That approach has failed.”

Considering the Victorian and Queensland governments received favourable coverage from the local News Corp papers before losing government, it sounds like a smart strategy, if it is in fact a strategy.

Abbott memories rekindled. Following our picture of Prime Minister Tony Abbott in his university days yesterday, we have heard from another tipster who was present at the abortion rally in 1979, and remembers Abbott clearly. “It was at the Wallace Theatre”, our source says, telling us Abbott was then a staunch anti-abortion activist, and his speech focused on the idea that abortion is a sin and that women who get abortions are sinners. Our tipster says that although he was much less restrained than he is now, he wasn’t fazed by the opposition he faced at the rally — which sounds just like the PM we’re used to.

Rinehart no heiress. Gina Rinehart has declared she is not an “heiress”, despite having been described as such for years. Rinehart was listed as Australia’s top female entrepreneur by Crikey sister site SmartCompany last week, but the site received a complaint from her spokesman and chief financial officer at Hancock Prospecting, Jay Newby, saying that the use of the word “heiress” was incorrect. The SmartCo story says:

“‘How can anyone be an heiress if the relative left a bankrupt estate, as was the position with Mr Hancock’s estate?’

Newby says when Rinehart assumed the chairmanship of Hancock Prospecting upon the death of her father, Lang Hancock, in 1992, the company was ‘in a parlous financial state’.

He says Hancock Prospecting had ‘significant debts’ and other liabilities together with ‘significant legal claims against it’.

Newby says Hancock Prospecting’s assets were mortgaged or under legal threat, and an associated entity, the Hancock Family Memorial Foundation, was insolvent.

‘Over the next 20 years Mrs Rinehart built the company group into Australia’s largest and most successful private company group through hard work, great effort, long hours and dedication, with the assistance of only a very small executive team,’ he says.

SmartCompany responded to Newby saying it will not change its description of Rinehart as an heiress given she inherited Hancock Prospecting and Hancock’s Rio Tinto royalties.”

All the leaves are brown. Autumn is just around the corner, and it seems the falling of leaves is on the minds of the nation’s top public servants. According to a tipster, APS Commissioner John Lloyd labelled Australia’s public servants as “deciduous” workers at a speech at the National Portrait Gallery today, where he signaled that he would be cracking down on sick leave and underperformers in the public service. Our tipster says that he later used the correct “assiduous” to describe the workers, but it’s not the first time a top mandarin has had the same slip of the tongue — the Hansard of Senate estimates last month records the secretary of Treasury John Fraser saying “we worked deciduously” to get rid of public debt. We hope they don’t have to spend too long cleaning up leaves in the office.

Fortescue responds. Fortescue Metals has been in contact with us about our tip yesterday in relation to its finances. Says the company:

“In response to the item ‘Refinancing going as planned?’ that appeared in your ‘Tips and Rumours’ column, Tuesday 10 March, Fortescue has substantial cash reserves (US$1.6 billion at the end of December) and no debt maturing until April 2017. The proposed re-financing will raise secured debt to refinance higher cost, unsecured debt over a longer term and is being undertaken simply as part of a responsible approach to capital management. Fortescue has historically gone to the US debt markets and did not approach Australian banks in connection with this re-financing, so the comments made in this regard are false.  Further, there are no financial maintenance covenants attached to any of Fortescue’s debt therefore any suggestion the company is at risk of breaching covenants in five months’ time (or any time) is also false. The refinancing process was announced on Thursday 5 March and as indicated in the press release published to the ASX on the day, will take several weeks to complete. As such, any suggestion the process isn’t going to plan is, again, incorrect.”

Many happy returns. Today is an auspicious day, as it marks the 84th birthday of the one and only Rupert Murdoch. As Crikey readers know, Murdoch has already received an early birthday present from his News Corp employees — a golden doodle puppy called Bluey. Murdoch is now well and truly past the age at which many people would decide to retire to a coastal town or a hobby farm, but the mogul is showing no sign of slowing down. We wonder if any of the junior Murdoch clan are looking at their smartwatches waiting for him to hand over the reins.

Pollies and their pets. The furry friends of the nation’s leaders can reveal a lot about their owners, but we’re not sure what this picture of Liberal Democrats Senator David Leyonhjelm says about him. The feline’s name is not revealed, or if it believes in the free market above all else, but we look forward to its continued presence on social media. 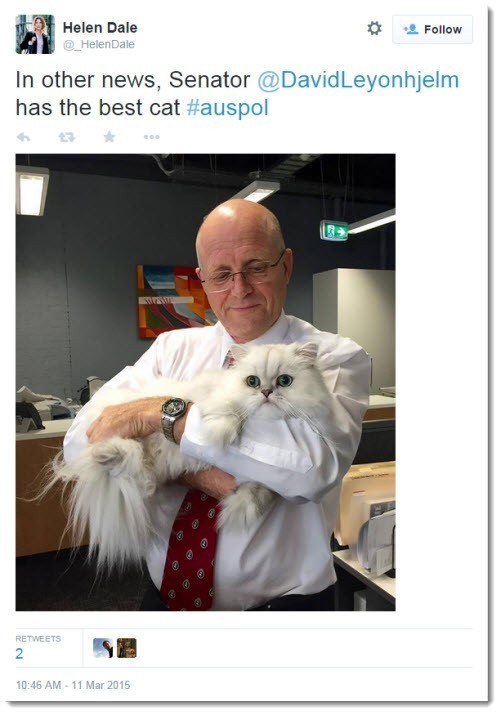 But it is a beautiful cat.

Isn’t that Ernie Blofeld and Oliver?

Re Gina Rinehart – Mr Newby peddles a nice line of bullshit. Adele Furguson in her book in Ms Rinehart details how there was a lot of transferring of assets and ducking and weaving just before her father’s death so that Ms Rinehart’s step-mother wouldn’t inherit anything from her father’s estate.

Just about all of Ms Rinehart’s wealth is built on royalties received from the mining leases gifted to her father by the State and subsequently passed on to her. She is undoubtably an heiress.

Yes, well bjb puts it rather better and more succinctly than I was planning on, but by golly there is some serious ‘rationalisation’ going on in the Rinehart psyche.

I find that to be true of anyone who is moderately or more successful. All of them, by definition, are self-made men and women, each and every one of them. All of them, in reality, somewhat, mildly or completely delusional.

I’m sure James Packer is also a completely self made man, as is each of the Murdoch family.

If there is one truth in life, it is that apparent success breeds delusion more than anything else. Very few people recognise the role of luck, the law of large numbers or the inheritance of anything.

Self made men and women, every last one of them.